Community – For A Few Paintballs More

Following on from last week’s exceptional “A Fist Full of Paintballs,” the second half of Community’s two-part season finale came to us this week in the form of “For A Few Paintballs More.” Whilst part one focused on the riot between students eager to get their hands on the $100,000 prize for being the last man standing, the second part took us to new levels of paintball wizardry as the college bands together for a common purpose. It is revealed to us that the empire-like regime of the ice cream company appearing to be in charge of the competition is actually a front for Greendale’s rival learning establishment, City College. Their dean’s plan being to offer the large prize to students so that they will tear the college apart trying to win, then offing them one by one with his army of paintball storm-troopers so that no one claims the winnings. With a premise like that it really isn’t hard to imagine that seriousness wasn’t exactly a key point in the execution of this episode. How fun it must have been to act out everything portrayed on screen I can’t say for sure, but for anyone who has ever played paintball, the nostalgia will likely have been rampant when viewing.

Hitting home the Star Wars theme in this episode, the opening credits deserve another standout mention this week as we move on from the Wild West theme to a Star Wars opening scroll. Genius as the homage was, I am actually somewhat frustrated with the writers' choice to include it in the episode as I still cannot decide what I was more impressed by: the way in which the Community theme tune was still completely recognizable even when played in the grand orchestral style of the Star Wars theme, or the extent to which I laughed when after one short paragraph it read, “Let’s not draw this out...” Whether it was the Star Wars fanboy in me laughing or not I will never know, but I’m sure anyone would appreciate the satire. Of course no Star Wars homage would be complete until the characters take on the legendary roles of the protagonists, so when Abed called dibs on Han Solo, the episode was well and truly on its way to becoming a classic. 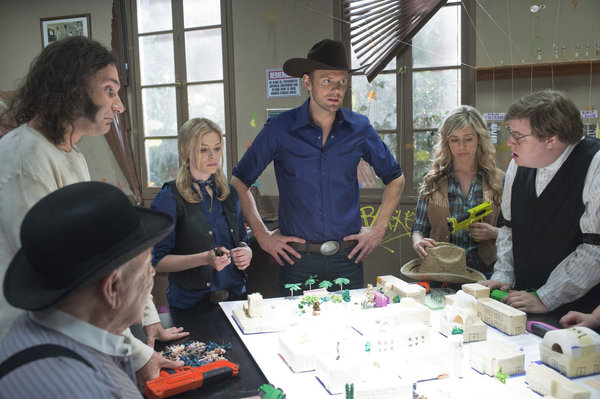 Forming their own version of the rebel alliance, the students of Greendale all agree to band together to defeat City College, with the last man standing donating the prize money to the college to repair the damage caused by the game. As they work to defeat their enemy we see the return of the extremely charming Abed from part one, this time as the reluctant but cocky hero whose role he has taken on. I praised Danny Pudi’s performance last week and mentioned that he has been a consistent beacon of everything that is right with this show since day one. However, his turn as Han Solo may actually have been his best yet. A mix of his Don Draper and cowboy facades, his ability to act like other actors is simply astounding at this point. Though an Emmy nomination will almost certainly never come his way, if there is a better supporting cast member in a comedy that isn’t Community itself, I can’t think of who that might be. Continuing with the performance though, it is definitely worth mentioning some of the great recurring characters that got some screen time in this episode as well. Whilst the twenty minutes of airtime limits their roles to literally seconds, Garrett, Vicki, Leonard and Magnitude’s appearances in the episode were all strong additions.

Whilst the first ten minutes lays the groundwork for a showdown, the back half of the episode belongs essentially to the execution of Greendale’s plan to defeat the invading forces. Troy leads half of the college to lure soldiers into a trap in the library while Jeff leads the others in an attempt to take down their enemy’s most powerful weapon – a Gatling gun. There’s little to say for any depth of plot that exists as there really isn’t any; what unfolds is largely just a bunch of people shooting at each other. That being said, it is unbelievably entertaining. The only beat that could have any long-term consequence for the show comes when, as they begin to lose their fight and all hope seems lost for Greendale, Annie takes the opportunity to kiss the charismatic version of Abed before he paintball-dies and reverts back to his usual self. It seems unlikely however that the kiss would result in anything more as Annie has now had a crush on every male member of the study group besides Pierce and absolutely nothing has come of any of it.

After being informed that he was to be kicked out of the study group in last week’s episode, Pierce has very little to do with “For A Few Paintballs More” until its close. Staying on the sidelines and trading Greendale secrets to the enemy for pudding cups, he managed to redeem his bad ways when he steals a storm-trooper uniform to get behind enemy lines, killing the last remaining members of the City College forces, winning the game for Greendale and offering the money to the college despite his exclusion from the rebellion. Seeing his selflessness as a sign of change, the group offers him a chance to rejoin and take whatever class they decide to be in next year along with them – shockingly, however, he declines. I’m fairly certain that Chevy Chase is returning to the show next year as I’ve seen nothing to indicate otherwise, but how this storyline will be resolved I’m really not sure.

When the dust settles, this season of Community and this episode itself was fairly fantastic. There were low points and episodes that felt like a bit of a letdown relative to the general quality of the show, but overall it’s not difficult to see why NBC made a pick-up for a third season.