Company of Heroes, by Relic Entertainment has been nearly a gold standard for real-time strategy games for over four years. The gameplay had been refined and defined by earlier releases from Relic in the form of Dawn of War, a Warhammer 40k RTS, and its expansions. Released in 2006, Company of Heroes perfected the system developed in Dawn of War and impressed the gaming world with flawless squad-based unit management and historically accurate scenarios, troops and equipment. It had deformable terrain and a real-time cover creation system, in which squads could take advantage of cover created on purpose of by result of battles. A peaceful French countryside often became a crater-scarred mess, allowing soldiers to automatically hide in the rubble on the fly. By some twist of fate, Relic has seen it appropriate to take the quality of Company of Heroes and make it freely available in the form of Company of Heroes Online. 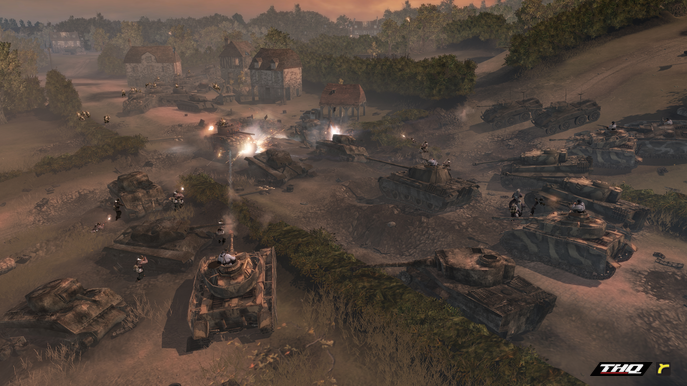 This version of CoH does not require you to own the previous version or its expansion packs.  It uses the same graphics engine and units as the original, minus the expansion pack armies of British and Panzer Elite; it even contains the original game’s campaign.  The difference is that now the player, prior to playing, creates a persistent commander that they control and improve through gameplay. There are, at the moment, six different possible commanders to choose from (not including cosmetic changes), each representing one of the three leadership doctrines for each faction (American and Wehrmacht). The commander has the ability to pick and choose abilities, both new ones unique to Online and old ones pulled from the original. These abilities can be upgraded with points gained from leveling your commander with battle experience. Each combat, in addition to experience, items, or hero units, also provides supply points which serves as the in-game currency; these points can be used to purchase specific unit upgrades that last for a certain number of uses, improvable hero units that gain persistent experience themselves, and to pay for ability upgrade reassignment.

Each player can utilize in any one game up to eight unit upgrades, which can range from added damage for machinegun teams to added sight range for light armor. Better unit upgrades become available as the player ascends in rank, and extra upgrade uses can be purchased with supply points. Hero units are special units that are purchased with supply points or won in games. There can be multiple versions of a single type of unit with different skills, but each one has five ranks of experience in which they gain certain abilities that make them more powerful in different ways than the regular variety. Only a limited number of hero units may be used in a game, as they must be assigned to their appropriate production building (Riflemen to Barracks, Pumas to Sturm Armory) and each building only has a few spots for such units. However, as the player gains in rank, more spots become available in the initial buildings as well as opening spots in more advanced ones.

Other new elements include Reward games, which double the experience and supply points offered by randomly assigning players to a Victory point game, in which specific points have to be held on the map for a certain amount of time. Custom games remain from the original, in which players can choose the elements of a game as they wish.

Company of Heroes Online is being marketed towards Asian markets quite heavily; Chinese online game operator Shanda co-developed the Chinese edition, and WindySoft is publishing the game in South Korea. While the Korean and American versions contain the single-player campaign, the Chinese version is oriented towards a fully multiplayer experience and lacks the solo content. The game is currently in open beta, and is available to all to play at the moment. The actual release date is scheduled for 4th quarter of 2010. If you wish to get in on the action, head on over to www.companyofheroes.com, make an account, and download the client. Enjoy!