That Zombie virus is everywhere!  It seems like no genre of gaming can escape the menace of the undead.  You’d think that puzzle games along the lines of Bejeweled would be safe, but no, the tide of undeath has come to devour the big juicy brains of puzzle gamers, with a new title called Containment.

The premise is that the town of Franklin has been overrun by zombies and a small band of survivors must make their way out of town block by block, fighting zombies all the way. Each “Block” is a stage of the game and at the beginning each block there will be a group of survivors with several zombies mixed in.  Players can’t control the survivors directly, but can make them swap places. There are four kinds of survivors, each color-coded and if you surround a zombie on all sides by survivors of the same color, then the zombie is “Contained”.  A euphemism for “Brutally slaughtered”. 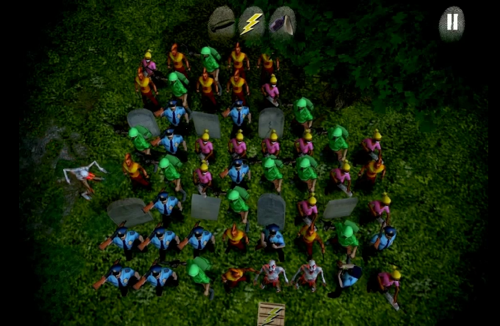 If a survivor is next to a zombie for too long, that survivor will become infected and turn into a zombie.  Send too much time planning your moves, and you’ll find yourself having to contain yet more zombies as they spread through the ranks of your survivors.  It requires quick thinking and an eye for strategy.  The use of zombies works well with this gameplay idea.  While this “Surrounding” concept could be done with jewels or beads, the zombie theme is especially fitting because of violent premise.

The four types of survivors are Police, Soldiers, Punks and Doctors.  They can all kill zombies just as effectively, but each kind will give players a particular kind of power-up when they defeat a large group of zombies.  These special power-ups range from a police sniper shot that can kill any single zombie, to an airstrike that can wipe out an entire line on the board (Usually killing other survivors too).

Even though the game plays in two dimentions, it runs on a 3-D engine.  This lets the camera slowly track through a fully-constructed town as it moves from one zombie attack to the next.  As it does so between blocks, text appears on screen to tell the story of the survivors.  This mostly consists of dark humor like calling the zombies “The World’s Slowest Smelliest Parade”, but it slowly changes to a more serious tone as the game progresses. 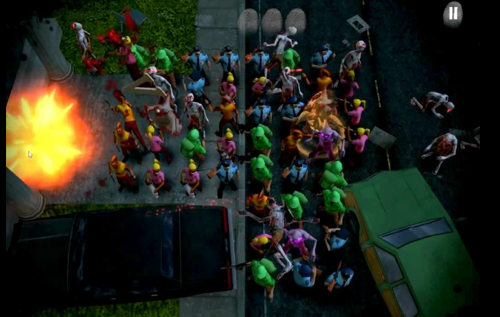 The puzzles constantly take on new twists, and many levels will give the survivors barriers to fend off the zombie from one side, or split the survivors into groups.  Environmental hazards can be employed by observant players who click on icons near the side of the screen.  To keep players on their toes, zombies will drop down from above, and stagger in from the sides, to pounce on survivors.

New kinds of zombies are slowly added in over the course of the story, and these include zombie wizards that can quickly transform nearby humans into zombies.  There are boss monsters too, and these have to be surrounded by very large groups of survivors, so they pose a big challenge in terms of keeping a sufficient number of like-colored survivors alive.

The main problem with Containment is its obvious roots as a mobile game for iPad. Instead of clicking on icons, you must “Swipe” your mouse across them.  This is a bit tricky to get the hang of. The icons on the screen also look like finger prints, encouraging players to tap the touchscreen.  These should have been redesigned for the PC release. 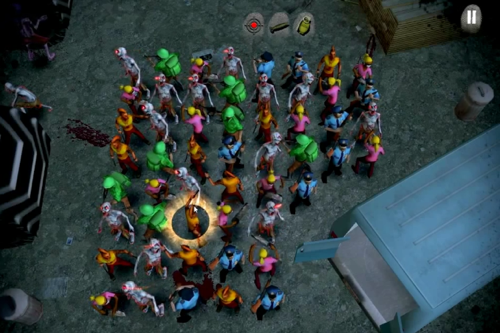 It’s also a bit short in terms of the story mode.  This is divided into five Acts, each of which has five levels that all have a handful of “Blocks”.  There’s a survival mode too and this will give players something to do after beating story mode.  Some of the levels in Story Mode do have multiple paths, so that gives justification to replay it.

I’m not a puzzle game fan and prefer to spend my time killing zombies, or enjoying a good story, so Containment seems to be designed just for gamers like me.  In the same sense that Puzzle Quest is both a Role Playing Game and a puzzler, Containment gives some casual intellectual stimulation to hardcore zombie killers.  It’s available now for PC and iPad.