I’m kind of perplexed by this week’s episode. Since the beginning of the show, Auggie has been far and away my favorite character and you would think an episode devoted to his character development would be awesome. However, in giving Auggie most of the screen time they made his character less special and, if we are to believe this is his new path, rather generic and boring. We all knew that Auggie was a strong individual whom had a past that we, nor the majority of the characters, were privy to. In Communication Breakdown we are shown more of who he is but it just is not who we wanted him to be.

The episode starts strong with basically all communications in DC being cut out: TV, Cell phones, computers, ect. It is an interesting premise that the show quickly shoves under the rug and becomes mere set up for a by the books story. It seems that all the hackers in the United States meet at an bi-annual conference to meet with intelligence agencies to discuss holes in security and look for jobs. OK I can buy this, it’s a little farfetched but I can roll with it. Auggie, it seems, is a big fan of this conference and has attended in the past. The CIA finds out that the person responsible for a recent blackout, is Auggie’s former girlfriend with whom he did not part with on good terms. This is the catalyst for him to return to field work. He has not seen this girl in two years which brings up a weird question, how long has Auggie been blind? He lost his sight while in the armed services, so when did he have time to be a famous computer hacker. To make matters more confusing, when he finally finds his ex, she is completely unaware that he has lost his sight. I am starting to become confused about the shows timeline. 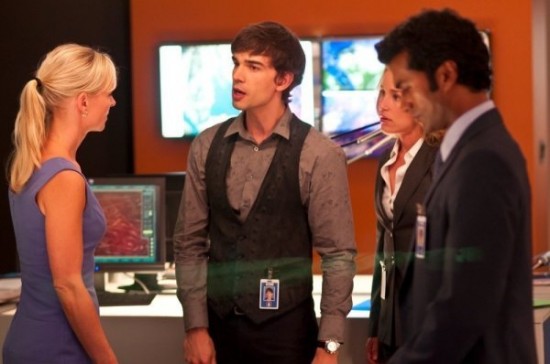 Before any of this however, we see that Auggie is in a relationship with the reporter that Arthur threatened a few weeks prior. We have learned that there is a leak within the CIA, another very unoriginal storyline, and it would appear to be Auggie. He denies that he is the leak to Annie when she confronts him about it and says that he is simply 'working' her, to find out who the real leak is. I tend to believe him, only because he is Auggie, but the way it was handled was just rather sloppy and Annie seems to be OK with the relationship far too easily.  Annie, while Auggie is trying to get the data for the hack from his ex, is dealing with family fallout after the revelation that her sister’s husband lost his job. Danielle is starting a catering business and the website had pictures of Annie that the CIA said were breach of security. Annie gets into a sibling dispute, that ultimately ends with her redemption. I have thought since the beginning that Anne Dudek has been severely underutilized and I hope this changes in the future. Right now she plays the simple sister that complicates Annie double life. She should act as the anchor, but instead acts as the weights.

I may be being a bit too hard on the episode but it’s only because the show had made great strides in the past couple of weeks and this felt like a step backwards. I hope they do not go down the 'Auggie as a love interest' route, becase he is fine on his own. He is a hit with the ladies and without him, Annie would be lost. I for one do not want to see the ‘will they wont they’ dynamic between these two, but it seems to be unavoidable. Not a bad episode but not the best.