Covert Affairs – Fools in the Rain

The show has really solidified itself as a highly entertaining show. We had our first plot twist this weekend and while it may not be the biggest revelation, it adds to the overall story and sets up the season finale well. You know, over the past couple of months Annie has really grown on me. Where at first she was too wide eyed and oblivious, she is now a rational and learned person and spy. The supporting cast put in fine showings today, even Arthur and Joan; the relationship I have been the most critical of.

The story starts with an Iranian national in Canada escaping from his captors and trying to make it to the United States. At the same time, Annie’s sister and her husband get into an argument over him being unable to take a trip to Niagara Falls. Annie quickly gets roped into both storylines, both playing the concerned sister and the conflicted agent. The micro story works because you care about Yahya, the Iranian defector, and you want him to find a way to the US and to his long lost love. Ok, so while the story may not be anything new and be borderline cliché, it all comes down to the characters and Yahya is convincing and relatable.

The interactions between Danielle and Yahya are particularly interesting as we finally get to see Ann Dudek play something other than the often annoying sister. You could tell that the actress was happy with her role, as this is the first time that I feel like Annie’s family matters. I do not mean to say her performance was perfect mind you, at times it did feel a bit phoned in, but the mere fact that we even care at this point is a win. 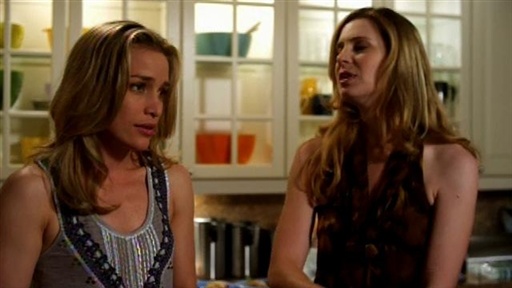 Annie is once again conflicted in how the powers that be want to handle her as an asset. The CIA wants to send Yahya back to Iran, thinking that he is more valuable inside, but Annie finds this decision hard to follow. This is the single best trait of Annie’s. She has the ability to create the best outcome out of terrible choices. The show shines when we are dealing with Annie making decisions without the help of the CIA.

While the main story is happening Arthur finds out about Auggie’s liaisons with the reporter. Auggie tells him the same thing he told Annie, that he isn’t the leak and that he is just probing (no pun intended) for information on the real leak. Where I didn’t believe him a few weeks ago, I am referring to him not being the leak, I tend to now. Where the audience might have found a grey area surrounding Auggie’s motives, the writers make it clear that he was telling the truth. Arthur feeds him information to give her, in hopes of narrowing the search for the leak down and it works. The unfortunate side effect being that she leaves him after he sends her on a wild goose chase.

The memories of Ben Mercer play an important role in Annie’s actions tonight and the cloud around the events of Sri Lanka start to recede. At first it seemed as though we were not going to get any pertinent information, but in the end we got a pretty interesting twist. It seems like Jai was there on the beach. Annie remembers seeing a man in a hat talking to Ben and when she see’s Jai at the bar it jogs her memory. While a bit deus ex machina I agree, it does create an interesting dynamic between Annie and the rest of the characters and gives a strong narrative thrust going into the season finale.

Next week is the two hour finale and from the previews, we know that Gregory Itzin will reprise his role as Jai’s father. He is a great actor and his character is interesting. It seems as though the season has led to a standoff between the CIA and Mercer. I for one am very excited for the finale and this episode did a great job of making me even more so.