Covert Affairs has grown a lot in the show's short run. Last week I talked about how each episode has been getting better and in this week’s episode, No Quarter, the trend continues. This episode combines the nuances of international espionage and a story back home, in a way that allows both narratives to succeed.

The story is divided between Annie abroad and the rest of our characters back at CIA headquarters. Annie is in a mission in Zurich that quickly spirals out of control and we once again find Annie lost and forced to fend for herself. The past couple weeks of growth are apparent and we believe that she can complete her mission because of her trials in the past. She teams up with fellow spy and this relationship becomes the crux of her character development in this episode. He is a veteran of the spy game and he provides Annie with the mentor role she has needed since the beginning of the show. His story become oddly touching and the episode touches upon the duality and loneliness that a spy must endure. Annie seems to like him and come to trust him. 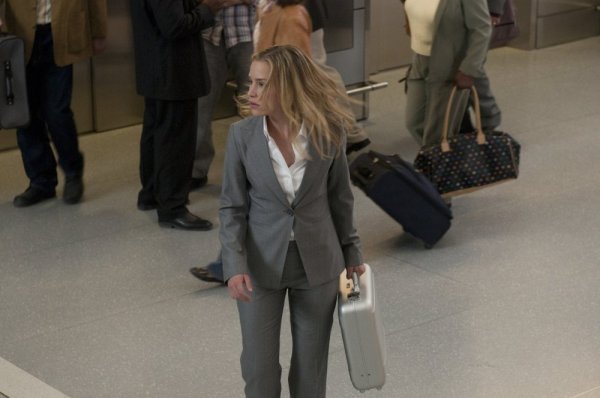 The story back home revolves around Arthur and his anger about CIA leaks. No Quarter actually succeeded in making me care about the Arthur, Joan relationship. I know I have been critical in the past, but that was just because the relationship felt forced and hard to believe. Arthur comes off as both a hardened public figure and as a loving husband. However, he does go a little overboard trying to find the leak. A reporter seems to have too much information and Arthur is afraid that they could put some of his operatives in danger. We feel for Arthur because he doesn't seem to care about looking bad instead appears to genuinly care for other people's safety.

Arthur forces all staff to undergo a Polygraph test in order to find the leak. This causes one of the most interesting dynamics of the episode. Auggie is forced to undergo the lie detector test and because of this he cannot help Annie, who has come to rely on Auggie in almost every situation. Auggie is the most likable and endearing character on the show, so we tend to think of them as a team. Taking Auggie away from Annie forced her to take care of the situation on her own. Without Auggie in her ear telling her what to do, she had to trust in her training to complete the mission and stay alive. I am not saying that I want Auggie taken away every week, but in this case it works because Annie really grows as a character as a result.

Overall the episode was good. As I mentioned before, they seemed to be increasing in quality every week. The show is really coming into its own. While not perfect, it is still an interesting hour of television and shows promising potential.