By: Justin Moody | Xbox 360 Reviews | July 7, 2010
The original Crackdown pushed the limits of non-linear gameplay. You were tasked with creating your own unique brand of justice while taking down the drug lords of Pacific City in whatever way you saw fit with your cybernetically enhanced Agent. So could Ruffian Games top the original over-the-top experience with their new sequel?

Crackdown 2 takes place 10 years after the original Crackdown with the end of the first game coming back to haunt the people of Pacific City. A mysterious virus is consuming the city's residents and turning them into genetic freaks and mutants who stalk the remaining people of the city during the night. The kidnapped citizens morph into freaks themselves, which continue to bolster the freaks' monstrous numbers. Now, the remaining people turn to their longtime protectors, the Agency, to deliver them from this new threat before revolution and chaos overthrows the delicate balance of life in Pacific City.

Forced to act, the Agency starts up its Agent program once again and you are amongst the latest batch of super soldiers set to quell this freak threat. Using all your powers and guns from the first game, along with a few new goodies, you must use the Agency's resources to restore peace to Pacific City. 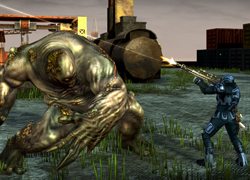 In regard to the new goodies, the Agency outfits you with new UV based weaponry due to the freaks' weakness to direct light. In this vein, your main objective has you helping to install a power grid dubbed "Project Sunburst" that will bathe the city in UV rays that will wipe out the freak outbreak.

Your other main objective is to keep the peace amongst the citizens of Pacific City as a new terrorist organization called "The Cell" are looking to keep you from completing your objectives by causing chaos whenever and wherever they can. That's when all those traditional weapons, like rocket launchers, will come in handy.

Unfortunately, I just explained the entire plot for you in those four paragraphs. That's it. If you're looking for some deep exposition and lots of narrative, this is not the game for you. If you are an explosion junkie though, then Crackdown 2 maybe your gaming dream come true.

The graphics for the game are done in a cel-shaded cartoony style, which lends itself well to the over the top chaos you can cause from the start of the game. However, it looks more and more like a ploy as the game goes along and you stumble across some rough polygons and plain looking NPCs. The audio is also relatively solid, but since there are only a handful of voiceovers, it doesn't really push any envelopes. 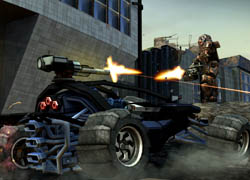 The game is also only par in terms of gameplay. Although set in a nice, somewhat expansive sandbox universe, the controls aren't as smooth as you would like them to be. To overcome this, the game includes an auto-aiming feature that removes almost all difficulty whatsoever from the title. Your agent's impressive climbing and leaping abilities can also become irksome as you quickly realize he can latch onto almost any and every surface in the game making it difficult to chase or run away from objectives at times.

The gameplay also comes up short in the RPG elements that the original Crackdown was famous for. I enjoy leveling up, but since there are only five levels to worry about per attribute, you level up so quickly now that there isn't a lot to bring you back in that regard.

Another category where the game is relatively average is the single player replay value. I beat the entire game with a maxed out Agent super solider in about 12 hours. The only thing that would bring you back to this is if you're an achievement packrat since most of them are very easy, although time consuming.

The overall replay value is saved though with an impressive multiplayer. Four-player co-op for the story mode makes it a lot more enjoyable than if you were playing alone and the versus modes, including the brand new rocket tag (imagine capture the flag with rocket launchers), could make this a worthwhile purchase if you really get into some online mayhem making.

Crackdown 2 is a solid effort, but lacks the things that I look for to make a game really standout from the crowd. A poor effort in terms of storytelling and a short campaign, along with limited features leaves this as only a recommended rental, especially if you never played the first Crackdown.

Crackdown 2 is Crackdown. This sequel has the same city, cars that don't transform and honestly the missions seem like secondary objective in a full game. I loved raiding major enemy strongholds in the original game, now strongholds are just wide-open areas without any funnel for the player to fight through. I can write a lot about what's wrong with Crackdown 2, but the game is still fun. Despite the "super hero traversing an open world" sub-genre evolving so much since Crackdown 1's release, this game is still fun to just fuck around in the world with some friends. The best thing to do is find a friend and you both rent the game for a free weekend.