By: Justin Moody | PS3 Reviews | November 25, 2010
In a holiday season dominated by secret agents and assassins, it can be easy to overlook some of the smaller games. While EA was busy focusing its marketing efforts on the Medal of Honor reboot and the latest Harry Potter game, Create managed to sneak onto the market and steal my heart. Sure, it is not a perfect game. Not even close. But it does have a certain pick-up-and-play charm, and at its best, it is capable of eliciting shouts of victory and high fives just as much as most other holiday releases.

The basic idea of Create is that you must complete set objectives by building Mousetrap-esque contraptions. Like a Rube Goldberg creation, the end result will often be over-engineered and elaborate. The catch is that you are only given certain items in each level, and you may only use a set number of these items to make it to the end, so you will have to think about how best to utilize the limited objects. For example, in one early level you are tasked with getting a package on one side of a canyon through a hoop on the other side of the canyon. In order to beat the level, you must attach a balloon to the package so that it will float, position a fan above the package to blow it across the canyon, and then position another fan to blow the balloon into a spiked outcropping, popping the balloon and sending the package falling through the hoop.

This simple setup eventually yields some pretty complex creations, but you will not be truly challenged for the majority of the game. Create has a very slight difficulty curve. You will breeze through most of the game with little difficulty, only pausing to think at the later levels. This fact is not helped by the miniscule variety in the objectives. The vast majority of the levels will simply task you with getting an object from point A to point B, usually forcing you to navigate around an obstacle or two in order to do so. I understand that Create is intended to be a casual game, and it does make for a relaxing play, but it would have been nice to see some more demanding levels for hardcore gamers. 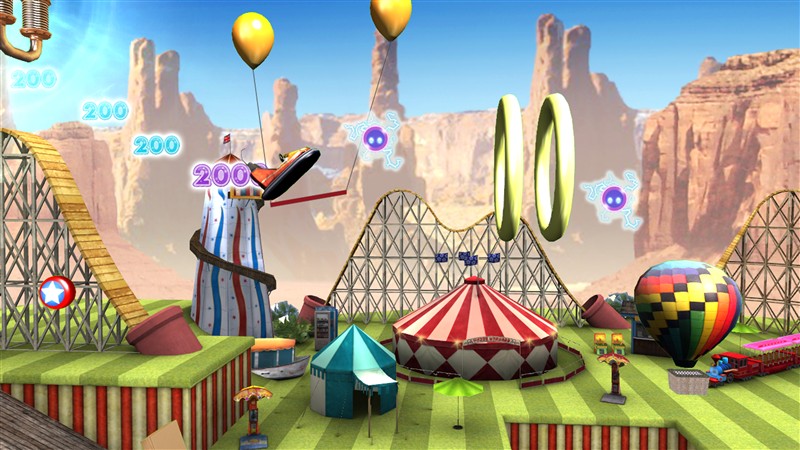 That said, Create is not always so forgiving when it comes to the placement of objects in a level. Figuring out what to do with the given objects might not be so difficult, but getting them placed just right can be a bit of a chore sometimes. Because each level plays out like a chain reaction, one messed up piece can muck up the whole operation. It is not difficult to move objects around, but it definitely would have been nice to have the ability to fast forward through a level to get to the part that you have been tinkering with. Watching the entire process play out every time you want to retry the level can get a bit annoying. Alternatively, a slow motion feature would have been helpful in planning out the trajectories of objects in motion so you could really see where your contraption has gone wrong.

Coupled with an obtuse and occasionally confusing user interface, it can sometimes seem like Create is not explaining enough. It will definitely be necessary to mess around with the controls and mash on some random buttons in order to figure out the full functionality of the game. A good example of this is the title screen. The game starts out with your typical logo floating in midair above a little scene, which you can customize with stickers and objects as in Littlebigplanet. Unlike in most games, though, when you hit the Start button the entire scene comes to life. The game will not present you with a menu screen, or any prompts, or really any cue as to what you are supposed to do to actually get the game started. Eventually you will figure out that, instead of pressing Start to begin the game as in probably every other PS3 release, you are supposed to use the right stick to scroll from the logo screen to the level select screens, which are presented as tiny little worlds orbiting the game’s main logo screen. This might not be so difficult for core gamers to figure out, but there are other instances in which you will have no idea what to do in order to get from one screen to the next, and the game’s UI will not be giving you any hints. For such a casual game, the lack of much instruction is weird.

Once you get the hang of the game, things will start to change. As the name implies, Create places a heavy emphasis on customization. Each world can be decorated with stickers, objects, weather effects, and even animals. These little effects are cool, but the real meat of the game is the level customization. Using a fairly robust level editor, it is possible to craft your own challenges and share them online with others. Weekly challenges encourage variety in the contents and themes of each level. One of this week’s challenges, for example, tasks you with creating a Thanksgiving-themed level. 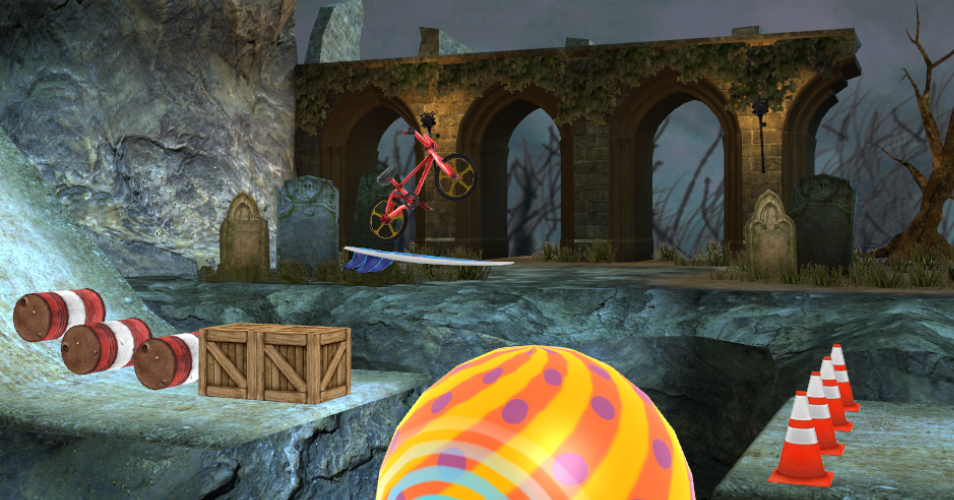 Despite Create’s lack of traditional multiplayer modes, this is a game that is best played with other people. Solving the main challenges becomes twice as much fun with another person shouting out solutions from the couch, and it is possible to whip up some pretty devious challenges with a little help. Thanks to the casual nature of some of the game’s challenges, Create serves as a great way to pass the time with your kids, your friends, or your significant other. You do not have to be a core gamer to see the appeal inherent in causing overblown chain reactions like the ones found later in the game.

Create will keep you moving through the game at a brisk pace thanks to the constant unlocks that it throws at you. Beating each level will net you rewards in the form of new customization objects. Many of these serve no practical purpose in the main game, serving instead to liven up the levels visually, but they at least the game makes you feel like you are constantly achieving something. Speaking of the visuals, Create is not exactly the greatest looking game around. The graphics are mediocre at best in a technical sense, but the style is at least colorful and clean, and this is not a game that relies heavily on graphical presentation anyway.

Create may not be the biggest name on the market this holiday season, but do not discount it merely because the brand is unfamiliar. Sure, the game is flawed. The UI could be a lot better and the challenges could certainly use more variety. That said, the emphases on creation and customization make Create a great stocking stuffer for the whole family to enjoy.
Rating
7.0