"Delightfully deliberate in execution of the dark romantic gothic tale"
By: Steven Armstrong | Movie Reviews | October 21, 2015
Halloween is upon us and we all know what that means. 'Tis the season to engage in frightful fun. It is time to break out your favorite costume in preparation for that Halloween party or for trick or treating (no judgements here). It is also time to watch a good, old-fashioned scary flick. Either on television or at the movies. Guillermo del Toro's latest offering, Crimson Peak, is one such flick you might find worth your while to catch. Every bit a Del Toro operation, 'Peak' is littered with symbolism (some subtle and some almost a bit heavy-handed) and beautifully detailed imagery throughout. It is probably one of the prettiest 'scary movies' you will find around, with dark and chilling images juxtaposed against tonally light ones; photographed with such a poetry that is remarkable. His fascination with monsters and creepy creatures is also in full force, hallmarks of a Del Toro affair. Another aspect that gives it some substance is the engaging narrative that makes you feel something. No, it is not particularly profound, but coupled with the striking visuals the effect of the film as a whole is potent. 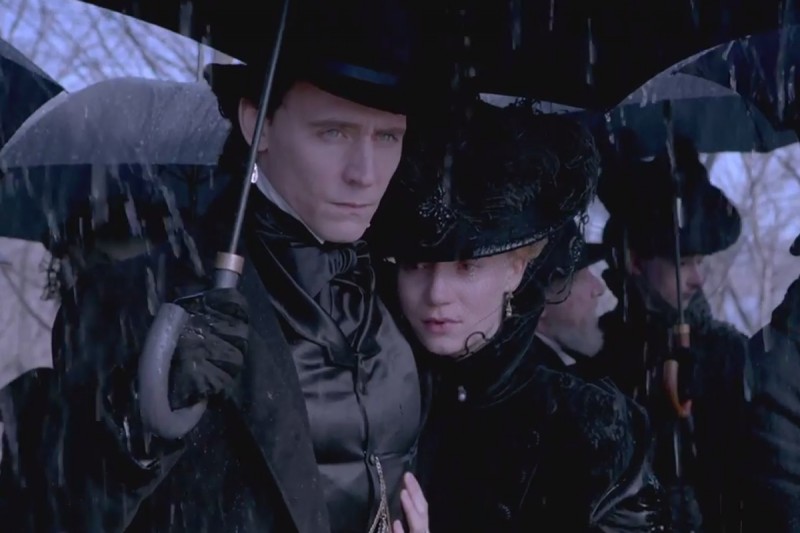 This movie gets right down to business setting the dominoes up, which we know will soon be knocked over with skill. Edith (Mia Wasikowska) is a young aspiring writer living in Victorian era New York with her father (Jim Beaver). It should be noted that she can also see and hear ghosts. Living in a time where her peers only care about who they are going to marry or who they might dance with, Edith is more into reading and writing, hopeful that her 'ghost story' will be published. She begins to step out of her introverted bubble when the mysterious British aristocrat Thomas (Tom Hiddleston) and his sister Lucille (Jessica Chastain) swoop in to town in the hopes of securing funds for one of his inventions. Soon Edith and Thomas become close, in spite of her father's and childhood friend Dr. McMichael's (Charlie Hunnam) disapproval. Soon, Edith gets swept up in to a ghost story of her own when she marries Thomas and moves to an old decrepit house under the watchful eye of Lucille atop the dreaded Crimson Peak. Named so because the ground beneath the house, in its walls, and everywhere around the area oozes with a red clay substance that looks eerily like blood. 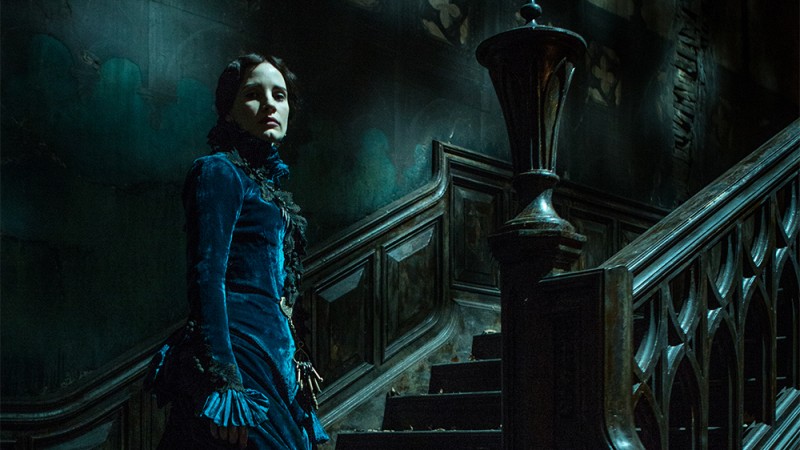 Is this movie really about ghosts? Of course not. Sure, there are ghosts in it, but this movie really is about the secrets that lie within the house on Crimson Peak and how those secrets move Thomas, Edith and Lucille. The movie is artfully built around the three leads of Mia Wasikowska, Jessica Chastain and Tom Hiddleston, who carry this film wonderfully, though it is clear that the richer characters of the three are easily the women. Hiddleston takes a bit of a passive stance for a change here while Wasikowska's Edith moves along a wonderfully constructed arc from the wholesome and innocent intellectual to a more grounded and active participant in the direction of her path, gradually revealing a darker, edgier quality that is necessary for her survival. Chastain however, steals the show as the delightfully dark and intoxicating Lucille. She is a great foil to Edith. There is such a richness to the character of Lucille, who experiences a wide range of emotions from jealousy to intense love to incomprehensible rage, to sorrow. Chastain revels in sinking her teeth into the meat of the role. Lucille is a character that is at once despicable and tragic and Chastain pulled the necessary strings to get us to feel exactly how we should. It is no surprise she is now known as one of today's powerhouse actors, bringing great pathos here; one feels for her. 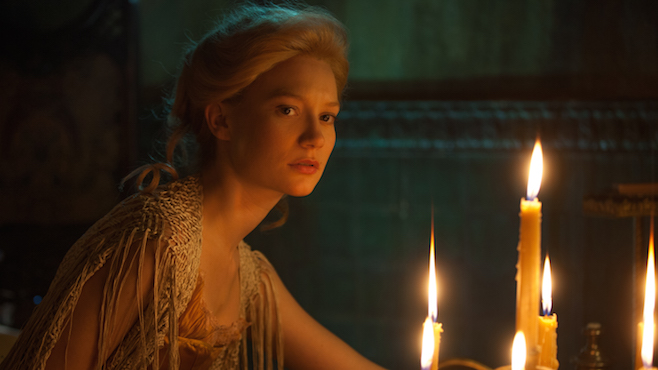 At once an entertaining mysterious chilling tale as well as a commentary on enduring love, the distortion of love and the question of what a monster actually is, Crimson Peak will be surprising to those who are looking for something scarier. Seemingly influenced by some great classic gothic horror stories, from the great Edgar Allen Poe particularly, and onward, Peak is a tale that makes you feel disturbed by what you experience, but you are also entertained, having been wrapped in an enthralling story. It is a film that comes with its share of obligatory jump scares and foreboding musical cues, but it is no darker than anything else from Del Toro's oeuvre; right in line with the larger themes and symbols that all his films examine.
Rating
8.0
Pros