Crossed is a series that I have wanted to review for a very long time. It is a series that has engendered a very infamous reputation as being one of the most vulgar, unreadable, and borderline disgusting comics that has been published in the modern age of the medium. And that is all true most of the time – and so I have not been able to review due to every single word I would write being mainly negative - but it is NOT always this way, and that is something I cannot stress hard enough. For under the pens of two particular writers, whose runs on the various Crossed titles are seriously underrated and ignored, the premise shines through to actual quality of writing. Those names? The first is Simon Spurrier, the current writer of the Crossed web comic Wish You Were Here (which I recommend to all interested in this series) and the second is none other than the creator of Crossed and the best writer the franchise has had since its inception – Garth Ennis.

While the series is noted for it’s brutal displays of gore and sexual depravity Garth Ennis writes them in a completely different way than say some of the series’ worst writers, such as David Lapham (who really is the worst writer of the series in my opinion). For Ennis is able to take those moments, those grotesque moments, and while he includes he actually makes them mean something. You want to know the magical secret behind that? The special ingredient that lifts his Crossed above what people brand the series? Actual, believable, and entertaining characters and motivations. Ennis has proven time and time again that even in the most “vulgar” comics (ie. The Boys and Hitman) characterization comes first. So it comes to no surprise that while the last few arcs of Badlands has been almost non-stop debauchery Badlands #25 almost gives you whiplash with how slow it starts. Not slow in a bad way, not at all, but in a way that shows the reader that things are being built up. 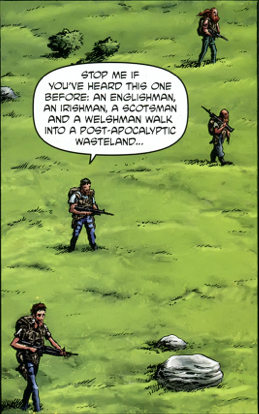 Instead of bombarding you first with images of how the Crossed work it instead begins with a surprising introspective monologue – a reflection of England, of War, of human nature. Sure nothing truly philosophical or deep, but the sort of thing that some normal bloke would think up and try to theologize. Again, this is something that Ennis excels at. Accompanied by this is a very steady introduction of characters, showcasing their personalities straight away each displaying good and bad qualities – all with a heart and yet all with the tendencies that come with having less of one. Not the simplistic cardboard cut-outs of a cast that Lapham and his cohorts like to use, but multi-layered and faceted constructions.

This is most shown through a device that Ennis uses very early on – a truly moral dilemma. Whether or not the so-shown mercenary-esque cast that we have just finished being introduced to can risk losing their position to save a gaggle of innocents from the Crossed in a world that is going to hell anyway. Now it doesn’t matter either way what these characters chose but what does matter is that Ennis decided to place that choice within the narrative, to force the issue, and that is simply the biggest and most key difference between his Crossed and others and why his is considered the best.

Other Crossed writers would simply have just shown the innocents being slaughtered and have the characters just walk on by and be completely indifferent. For it is Ennis’ tone that rises above that needless distraction of gore. Lapham and others (ie. those like David Hine) enforce the mindset of “Man is no different from the Crossed” while Ennis goes and says “We can be if we only try”. It's not nihilistic, it's hope in a time of depression. It changes from schlock to nuanced material under Ennis’ guidance. It stops being Cannibal Holocaust and puts in The Exorcist. So, yes, the would-be soldiers (another Ennis mainstay so he’s playing to his strengths here) do save the innocents because while the world might not be worth fighting for in a time where the Crossed rule – you still have to stay human. 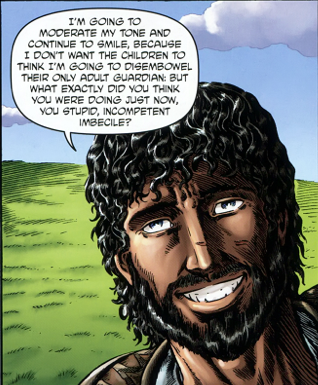 Ennis (and Spurrier) bring out the human drama of the premise and so that is why his return to the series is a very welcome one. The art by Raulo Caceres is typical Avatar Press fare, with that unnervingly greasy look that the imprint sems to enjoy, but his art is expressive and that is where it earns its keep. It adds in the extra layer of character bits that brings Ennis' writing straight on home. It's hard being a Crossed fan because not every thing the series has to offer is like this - by which I mean "of substance" - but when it does happen it makes it all worth it... metaphorically of course.