By: | PC Reviews | March 22, 2011
With Crysis 2 coming out this week, it only seems appropriate to look back at the origins of the series: the original Crysis exclusive to PC.  Crysis was a graphical tour de force for its time, and offered players tactical shooting bolstered by the "Nanosuit", giving choice to the gameplay. It's a landmark for PC gaming to be sure, but does it hold up today 4 years later? The short answer is yes, but Crysis may have gotten even better with time.

Crysis's story casts the player as Nomad, a member of the U.S. Special Forces who, along with his squadmates Psycho, Jester, Aztec and Prophet, has to rescue a team of scientists from the North Korean military. These scientists were studying abnormal alien structures on the Ling Shan islands, until they were taken hostage by North Koreans. Things don't go according to plan though, as members of Nomad's team are dropping like flies due to unknown reasons, and there are glimpses of aliens in the jungle. The story serves its purpose well enough, mixing military action with alien encounters. The voice acting is fine, the story arc makes sense, but there is a feeling of detachment from the proceedings, which is a shame. 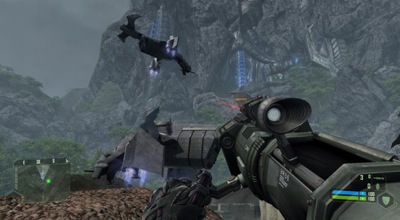 The core gameplay of Crysis is augmented by the Nano Suit, an armor that the player wears which grants several different abilities. There's a stealth mode, which turns Nomad invisible for a duration of time, there's an armor mode that lets the player take more damage without dying, which the nanosuit defaults to, a speed mode, which makes Nomad move and reload faster, and a strength mode that allows Nomad to throw enemies farther, punch harder, and decrease recoil with larger weapons. To make sure the player isn't overpowered, there's a limited amount of energy that the nanosuit can use. This energy regenerates over time, but you'll have to use it carefully. Sitting still in cloak is fine, but running while invisible will drain your energy very quickly.
The combat in Crysis is the setup we've grown accustomed to in the past few years, with the right mouse button to aim down the sights of your gun, left mouse button to shoot, and G to throw grenades. What makes the combat stand out however, in addition to the nanosuit, is the enemy AI. The North Korean soldiers are very smart, flanking, taking cover, and throwing grenades to flush you out of cover. When they don't know you're there, they patrol, investigate the area, and spread out if they notice something. The alien enemies are less smart, but they do show basic intelligence. The great AI goes a long way to making the game more tactical, challenging, and rewarding.
The level design goes a long way towards this as well. Crysis has several open ended levels, where the objective can be reached a number of ways. You could take the road towards an enemy encampment, or take the long way over the hill, and complete a secondary objective while getting a great sniping point. Most of the time, you can take whatever route you want to the objective, though there are obvious replacements for invisible walls like incredibly steep cliffs and U.S. naval forces which will kill you if you swim too far off the map. There are some moments where Crysis funnels you in one direction so it can advance the story, but these moments don't drag you by a barbed wire leash like other modern shooters.There a few times when Crysis is a bit too open, however, or at least doesn't communicate information clearly enough, resulting in some situations where you don't know where to go or how to get there. This is rare, though, so most of the time Crysis' open ended approach works very well, and enhances the gameplay.

Back in 2007, Crysis was the best looking game ever, but it would melt most gaming machines at the time on its highest settings. Nowadays, though, you can run it far more easily, and it still looks great! The foliage can look rough, but the textures are detailed, the weapon models are realistic, and the lighting is still spectacular.Explosions tend to make the game look nicer, too. The framerate still has the ability to stutter from time to time, even 4 years later, but it's a much smoother experience today. The music is fine, militaristic and epic when it needs to be, but it never really stands out. In fact, I can't even remember it right now.
Crysis is just as good today as it was in 2007, in fact, even better. The game has become very easy to run, and that means more people than ever can enjoy it. The gameplay is enjoyable and unique in today's Call of Duty clone-filled marketplace, and it's a great way to get ready for Crysis 2. If you have a PC that can run it, Crysis is a rewarding, tactical, and smart first-person shooter.
Rating
8.8