Welcome to Cyber Monday! So far we've had the Savage Dragon form Image comics (up to issue 20) and from Dark Horse weve had the first volume of the Executioner for all those Lone Wolf and Cub fans out there. DC has released Batman: Arkham City, with two first installments the regular first issue and a exclusive digital one. Marvel comics has Annihilation Conquest: Starlord. Boom! Studios offers us more Farscape. You can also get the Days Missing mini series as single issues or a collected edition or you can catch up to whatever comic book you've missed.

Although some interesting titles were digitized last week, the truth of the matter is that it was a slow week for digital comics. So I went and looked for some back issues and I stumbled upon JLA. Grant Morrison's JLA to be precise. You know reading his Batman run, I can't help but feel mix emotions about that series. Time traveling Batman? Flamingo? Weird lame villains? International Batmen? And the list goes on and on and I'm not saying is all bad, it has had great moments but is not Grant Morrison at his best. That is why I re-read his JLA stuff again. Now I have both printed and digital versions. They are both great. But the digital version lest us view the artwork like portraits or picture frames, all in their entirety so you can get a better appreciation of the pages.

But what set Morrisons' JLA run as a classic, is the epic proportion he brought to that series. He knew how to work with all the characters, without going to deep into character development. You could learn a lot from the characters without them saying or doing too much. The danger element was constant, here were the most powerful beings of planet Earth getting their butts kicked by real threatening menaces with evil ingenious plans that put readers at the edge of their seats. From Morrison's run, we rediscover "the big seven" nobody thought he could pull off the Justice League with just the main DC characters and he did for almost five years!

We saw how Batman was the most powerful member, even though he has no superpowers. How Green Arrow saved the team from the Key. How JLA Earth 2 spawned out of the JLA monthly (although we have to wait until they digitize that one) we saw how Darkseid ruled the world, the Injustice Gang and the list goes on. From a cast of seven it grows into a cast of fourteen, in a way his run was the predecessor to Justice League Unlimited. Heck! Some of his stories made it into that show. Morrison made Plastic Man cool. Even Neil Gaiman's Sandman makes an appearance. The action is non-stop as every story arc is crisis after crisis, no time to slow down and talk but you can still see the Flash and Green Larten argue like rival siblings and enjoy a very character driven title. The book is so good every story is memorable. 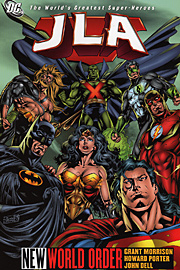 The art is still fresh, Howard Porter was at the top of his game and he was a perfect match to Morrison's fast paced, epic script. He knew how to portrait every character on the team demonstrating their personality by drawing the right body language to each character. Now we get to see his amazing splash pages the way they are meant to be seen, thanks to the amazing transfer job by Wildstorm.

Morrison's JLA delivered what is now missing in current comics great epic action and memorable moments. If you read this run before you know what I'm talking about is you reading this series for the first time you will never forget this master piece of a run. Probably the best justice league ever written. This comic book saga is better than any big event, DC or any other company has ever put out. Because Morrison knew that to write a JLA you have to think bigger than life. This is also a great introductional book for those who don't know anything about the DC universe. I don't know why DC is not putting this run on sale but if you have the mula to spend, get this run, you won't regret it and you will see why Grant Morrison is a genius.