It happens, you know? Great titles get crappy treatments. Especially when you've collected into trade paperbacks. It might be that you're reading your favorite book, your finger holds the page for too long and the art gets smudged. It might be that after you read an awesome book, the book bends and stays in a swirl-like form forever. It's possible that you are enjoying a book that has over five hundred pages and as you turn the pages a couple of them fall from the book. Yeah it's bad and horrible when it happens to your favorite comics.

I can tell you about my Jinx, a paperback originally published by Image Comics (great book, poor quality) that the middle pages fell out of. It bothered the hell out of me, until recently when Marvel republished a hardcover edition, smaller in size, bigger in quality. Another great book with poor quality is Dark Horse's Lone Wolf and Cub. This is more of a pocket book and I understand why they used this format. It's a twenty-eight volume series, imported from Japan, and not an easy sell to new readers. Their strategy to get new readers was to sell them a cheap ten dollar pocket book. A great selling strategy as the series became a bestseller – this made the book popular among fans. Lone Wolf and Cub is considered to be one of the greatest comics ever produced.

But my volume one of Lone Wolf and Cub has yellow pages, the cover is bent and some of the art has smudged. I stop at volume three, thinking that one day Dark Horse will publish a better quality, maybe hardcover edition of the books. Thankfully they sort of did. The digital app from Dark Horse has the first five volumes of this series. All of them are $4.99 each. Not bad for a digital book that can't change colors, get smudged or bent. Also the pages are bigger and you can zoom in or zoom out, making the digital reprint a more enjoyable and cheaper way to get the best of this series.

The series is about the Shogun's executioner, Ogami Itto. His wife is murdered and he's sworn vengeance. Now Ogami Itto and his child Daigoro travel a road of damnation as the assassins for hire known as Lone Wolf and Cub. They are not evil but they will kill anyone who stands in their way of retribution. I always considered Lone Wolf and Cub as a sort of metaphor of the river Styx or Dante's Inferno. You see after the murder of Ogami's wife both Daigoro and Ogami cease any type of normal life and became pure assassins. With every adventure falling into the darker and more sinister world of Edo Japan, the series is a bloody exemplification of the classic theme of revenge. 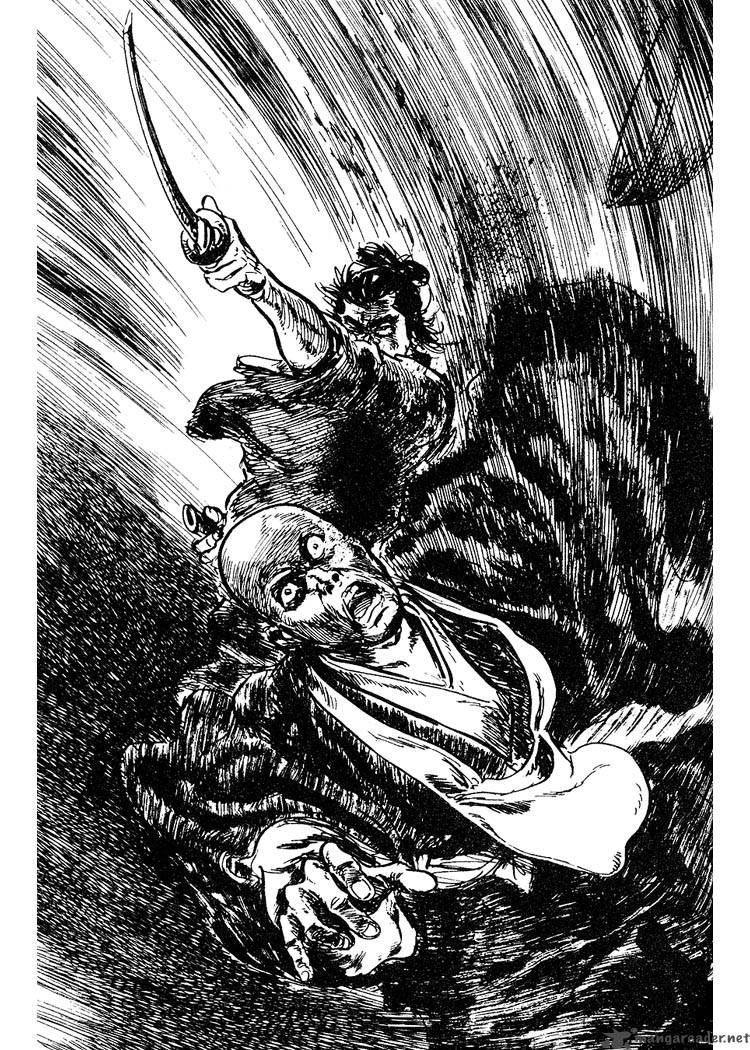 Lone Wolf and Cub is acknowledged world-wide for its brilliant writing of series co-creator Kazuo Koike. He is an example of a master character developer and a well-researched storyteller. The story is exceptionally carried out by the groundbreaking cinematic visuals of Goseki Kojima. Together they help create a book of unforgettable imagery and carefully layer action with an epic influence. Their impact is not only felt in manga but in American comics, movies and TV. The series has won numerous awards and is a perfect example of what a great comic book is all about.

So this is your chance to get this amazing series for a very low price. This digital form will not hold any collector's value but it will certainly let you read this series the way it was supposed be – over and over again without any damage to the book.