I remember back in 1993, a lot of people began collecting comic books mostly because the death of Superman was such a maintream hit. Some of my friends bought a couple of books in hope that they could sell them double the price. To some, it was good business to others not so much. We would sell them among ourselves. Sometimes I would get lucky and could get away with a couple of hidden gems, sometimes we would trade comics for comics. It was in those days that I stumble upon The Savage Dragon. I think I got issues five through nine. In those days I only would get the books that had the most amazing art; after all it was the dawning of Image Comics, everything was art in those days. But something about the Dragon was different, the art was great not as amazing as WildCats or Spawn but every time I look at the comic I just wanted to see more.

The book was fun, sexy, with lots of action and something about this universe... I don't know maybe it was SuperPatriot's dead cold eyes and weird robotic movements that really captured my imagination; I wasn't reading a comic it was an adventure. My enthusiasm for comics grew more. It was in those days that many comic book shop began to emerge in every small shop they could squeeze into. It was later that year or maybe the next year that my trips to comic shops became a monthly sojourn. I tried to find this Dragon character some more, but by the time I did a lot of issues had passed me by. The hunt for Dragon's back issues was a hunt that proved to be fruitless. I never bother picking up the Savage Dragon but I always kept seeing him, in ads, in magazines and what they said about the book was always the same: "is a great book" Damn! I thought, I had my chance and I missed it. 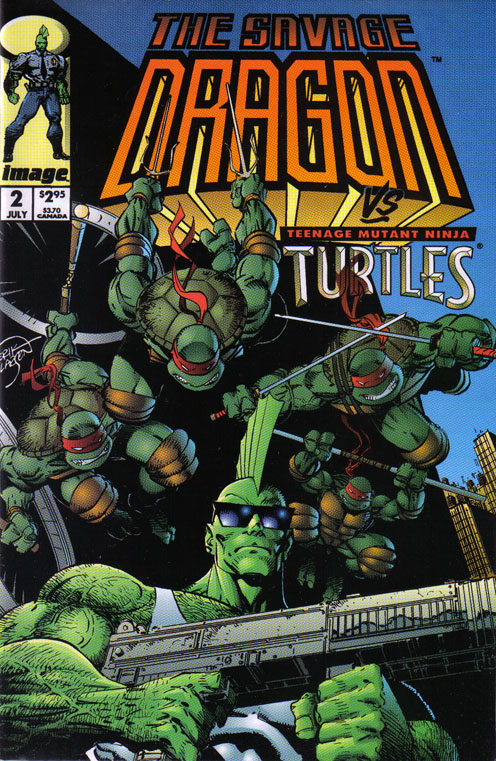 Almost twenty years later. Image comiXology app published the first year of the Savage Dragon and more. Not a person to let opportunities pass me by again; I got them. I can only say this: the Savage Dragon is the best comic ever published by an Image Comics founder. The concept is simple, green guy falls out of the sky into a burning field. Chicago, a city ruled by mutant criminal freaks, the police are helpless to fight them. They enlisted Dragon, In their fight against these super freaks; the result: one fine comic.

The first year we don't get to know anything about Dragon except that he doesn't remember who he is or was. We get to see Dragon beat the crap out of super freaks as seeing him getting his butt handed to him by the crime boss Overlord. Dragon gets his hand blown off, gets impaled and after that kicked by two other super freaks. Although in a weaken condition Dragon manages to beat the snot out of them. We get introduced to his first girlfriend whom later gets shot in the head. We see Freak Force for the first time (a group of super heroes) of course SuperPatriot, a Captain America type character that gets turned into this cool looking robotic killing machine and a crossover with the Teenage Mutant Ninja Turtles. 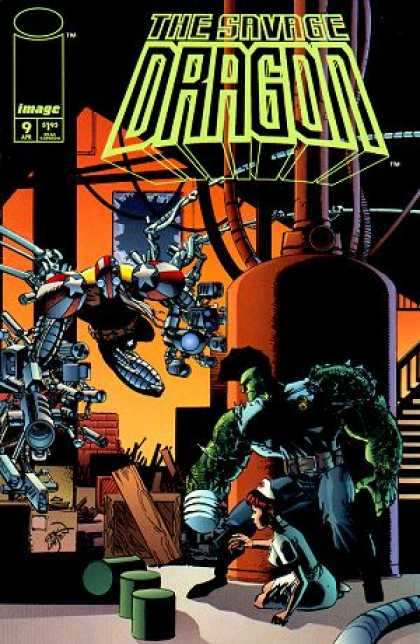 This comic brought something that mainstream comics at the time did not have. Solid, straight, action adventure stories with imaginative characters, that brought back weird concepts and pulp like sensibilities to what at the time was a saturated superhero market. The great part of Dragon is that he is not really a superhero, he is a policeman. Since the Dragon wears a police uniform and doesn't go with a fancy spandex costume this gives Dragon a lot of character and makes him unique in this super freak world. Also Erik Larsen gets a few oportunities to make fun of comic creators and the whole comic industry.

The bad thing about the Dragon is that the stories sometimes are too short and the transition of time are sometimes presented in a abrupt way. As for the digital transfer rather than taken from a master print, they look like they were scaned from a regular comic book. The splash pages are put together almost by tape, even the posters that this books have, are scaned with the metal clips still in the middle. This tends to be a bit of a bother. But if you want to discover the early days of this book this is a great way! The only thing missing from these reprints are the ads everything else is there. Also you can get the first mini the one that started it all in this app, there is another mini by Jason Pierson (The Dragon: Blood and Guts) as well as the most current Dragon Issues at least from issue 145 to 170. So if you are like me and you always wanted to buy this book this is your chance. Go get immersed into the fantastic world of The Savage Dragon. Signing off, this have been another edition of Cyber Monday.