"Soul hunter"
By: Sarah Walters | TV Reviews | November 22, 2015
The gang's all here this episode of Da Vinci's Demons! The original crew, Leo (Tom Riley), Zo (Gregg Chillin), Nico (Eros Vlahos), and Vanessa (Hera Hilmar), finally reunite in Florence. But this much-needed character reunion is not under the happiest of circumstances. Leo's just been through hell and back. He thinks that in order to keep his friends safe, he needs them to stay far away from him. In a touching scene, Vanessa visits Leo's studio and tells him not to shut himself off from his friends. Vanessa reminds him that he doesn't have to go through this alone. Hera Hilmar's performance in this scene was heartfelt. There are plenty of moments this episode that finally get back to the roots of Da Vinci's Demons and the things that really make this show click. It's great seeing the main cast finally interact all together again. They've developed a great on-screen chemistry with each other, and it really stands out this episode. In one of these moments, Vanessa is confidently debating the Council of 100 while Zo and Nico watch on in admiration like two proud brothers. After the debate, Zo surprises Vanessa and the three friends embrace. There's another great moment when Leo is getting back into the swing of things in his workshop. He's testing a flame-retardant compound he's created, and decides to pour it on himself and light his arm on fire. Not the brightest thing he's ever done. Like they did in the first two seasons, Zo and Nico save Leo from himself. They crash through the doors of his studio and splash a bucket of water on his burning arm. Because that's just what friends do. [caption id="attachment_77344" align="aligncenter" width="600"] 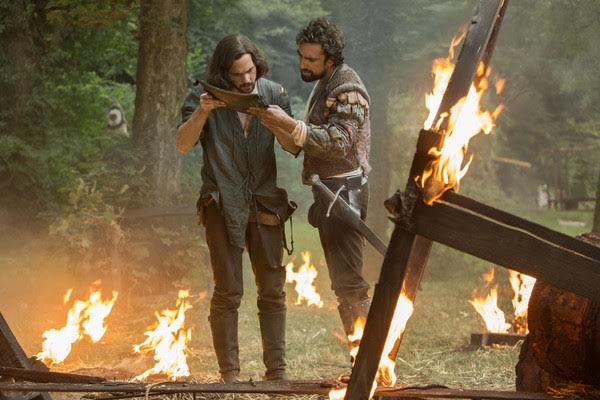 Leonardo (Tom Riley) and Zo (Gregg Chillin) inspect Ottoman armor after a failed experiment. Photo via Rotten Tomatoes.[/caption] In another such scene, Leo and Zo are testing the Ottoman's chest plate that Zo recovered from a battlefield. Zo discovers that the armor is sealed with a maker's mark that is identical to a Turkish gold coin, which he stole from Vlad the Impaler back in season one. Zo is rather resourceful, after all. Leo tells Zo they're going to give Vlad a visit, and Zo refuses, asking for a pay raise, with no reply from Leo. This kind of witticism and fun interchange is something I've felt has been sorely lacking this season so far. There's another great scene, this time between Riario (Blake Ritson) and Nico, where Riario is questioning Nico's judgment. Riario suggests that Nico is too distracted by his obvious crush on Vanessa to make the right decision regarding the crusade. Ritson and Vlahos add the necessary tension to this scene, since Riario and Nico don't have the best background with each other. A similar tense moment occurs between Leo and Riario, when Riario sneaks in to Leo's studio and Leo fires a projectile into a beam near Riario's head. Riario was there to drop off Leo's earnings from his deal with the Fake Pope (James Faulkner), but Leo is rightfully suspicious of Riario, and he questions him about what happened back in Rome. [caption id="attachment_77347" align="aligncenter" width="600"] 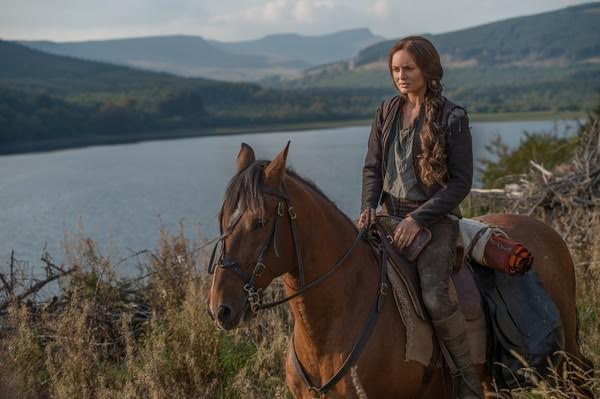 Lucrezia (Laura Haddock) arrives at Lupo's new home on the Italian coast. Photo via Rotten Tomatoes.[/caption] In the final moments of the episode, I was shocked when Leo discovers that Riario was the mysterious masked man running from the scene after Captain Dragonetti (Ian Pirie) was found dead and crucified upside down. Riario's eye is bleeding, clearly meant to demonstrate he was poisoned by the Labyrinth's conversion ritual. I just wonder, since it was so easy for Leo to capture him, if Riario was actually planted in the right place at the right time to protect the real killer. This episode also focused on the whereabouts of important supporting characters, like the Ottomans, the Sons of Mithras, Leo's mother Seer (Sasha Behar), and Lupo (Nick Dunning). Lucrezia ends up getting herself captured by Lupo, who turns out to be a creepy woman-killer and just general creeper (which I was not at all shocked by, and this story line ended up being like something from a low-level horror flick). And it turns out that two people who were alluded to be dead -- Lorenzo (Elliot Cowan) and Leo's mother -- are in fact alive. Leo's mother visits him in much the same way that the Turk used to visit Leo. It could have been a nice mother and son reunion, but Leo sadly thinks it's another one of the Turk's tricks, and he yells at her to get out of his head. (It probably didn't help matters that Leo had just smoked a bunch of opium beforehand.) During an exchange between Lorenzo, Al-Rahim, and the Real Pope, I noticed a flaw in one of the main story lines of season three. The Real Pope and Al-Rahim tell Lorenzo they want him to join the Sons of Mithras and become a leader like his grandfather, Cosimo. Lorenzo visibly scoffs at the suggestion, and says his grandfather never had a taste for such savagery, referring to the Ottomans. While I was watching this scene, I questioned the Sons of Mithras' approach. How did they expect to win Lorenzo over after the Sons of Mithras' newfound allies, the Ottomans, have invaded Lorenzo's home country, nearly killed him in battle, and horrified him with the brutality of war? And similarly, how did the Turk expect Leo to warm up to him after stealing ideas out of Leo's head? The explanations for the Sons of Mithras' motivations and their alliance with the Ottomans have been rather confusing. This takes away from what has been a cinematic and enjoyable series. I think this needs to be addressed soon, because we're running out of time.
Rating
8.7
Pros