"Free will"
By: Sarah Walters | TV Reviews | November 29, 2015
A major theme of this season came into crystal clear focus in this episode of Da Vinci's Demons: people are capable of both great good and great evil. The Monster of Italy is a living embodiment of this theme. It's revealed this episode that Riario is the serial killer called the Monster of Italy. The attempted Labyrinth conversion ritual split Riario's mind in two and created Riario's murderous alter ego, who killed Clarice, Dragonetti, a cardinal from the Roman Catholic Church, and a bathhouse proprietor. Over the three seasons of Da Vinci's Demons, viewers have been shown both the good and bad sides of Riario's personality. He started off in the series as a villainous threat for Leo and Leo's friends, and blindly followed his father's orders. In season two, Riario showed some compassion towards his former adversaries by rescuing Leonardo when his life was in danger. This season, Riario saved Leo from the Labyrinth's conversion ritual even though he was the one that put Leo there in the first place. [caption id="attachment_77567" align="aligncenter" width="500"] 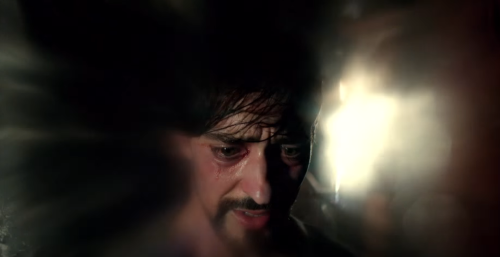 Blake Ritson as Girolamo Riario.[/caption] The dialogue is excellent this episode, especially between Leonardo and Riario, and there are a lot of memorable lines. In a well-written scene between Leo and Riario, Leo tells Riario that the two of them are similar. The Monster of Italy forced Leonardo to confront his own demons, and Leo says to Riario, "I am like you. I too struggle with myself more than any enemy. Let me tell you about Otranto. As I walked through the carnage, through the smoke and death, for one ugly moment, I reveled in awe at my machines of death, the glorious bloodshed that my creations had wrought. I hate that part of myself so much. I sometimes wish that I could open up my veins and drain the evil from my soul." This revelation from Leonardo hints at the theme of season three. Even a great man like Leonardo da Vinci has things he's ashamed of, dark moments, guilt that he has to deal with. Even though he's a great artist and the most brilliant mind in Italy, Leo designed machines capable of death and destruction. Leonardo's war machines got into the wrong hands, and he has felt guilty all season about the destruction his creations wrought on the people of Otranto. It makes sense, story-wise, that Leo tries to cure his former enemy. In a standout moment of the season, Blake Ritson gives a remarkably nuanced and intense performance as both sides of Riario. He switches effortlessly between the two drastically different personas. It's like night and day. One minute, Riario is sitting there, quiet, refined, soft-spoken, with an air of sophistication, even as he's handcuffed and chained to a column in Leo's studio. The next minute, the Monster of Italy takes over, and he's a loud, crazy, raving lunatic who gloatingly describes how he killed his victims in disturbing detail. [caption id="attachment_77565" align="aligncenter" width="500"] 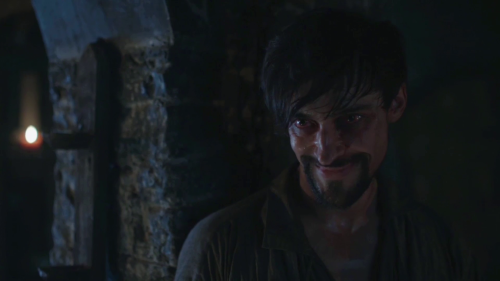 Blake Ritson as the Monster of Italy.[/caption] Blake Ritson makes this killer alter ego believable, and when the dialogue requires him to be a madman, he excels at it. Ritson perfectly changes his tone of voice, speech patterns, and delivery to portray the Monster of Italy. His acting is never over-the-top. Ritson's amazing timing and the way he delivers his lines are highlights of the episode. Ritson even brings some dark humor to his performance. The camera work captures this incredible performance, always having the Monster of Italy off-center, at tilted and odd angles. The Monster of Italy isn't the only madman this episode. Lupo is another murderous monster. He's been driven mad by the missing page from the Book of Leaves that he stole out of the Vatican's secret archives. This episode marks Nick Dunning's final performance of the series, since Lupo gets thwarted by Lucrezia and killed by his vicious hunting dog. Lucrezia, played by Laura Haddock, is no damsel in distress. She devises a way to escape the underground dungeon, and she rescues the newest cast member, Sophia, played by Sabrina Bartlett. Where this episode falls short is in the side stories that dealt with the crusade and the political life in Florence. They just aren't interesting. These scenes felt like a rehashing of what's already been discussed and established in previous episodes, and they came across as repetitive. In two different scenes, the Fake Pope and Laura were once again trying to convince Vanessa and Nico that Florence should join the crusade. If I was Vanessa, I'd be annoyed too if I kept getting pestered and told the same things over and over again from an overbearing rich woman and an intimidating creepy man wearing a giant ridiculous hat. Seriously, James Faulkner as the twin popes is one of the best casting decisions on this show. He's great at playing a creepy, intimidating, and bloodthirsty character. The Fake Pope is a ruthless guy. Like father, like son, I guess. Maybe that's where Riario gets his homicidal tendencies from.
Rating
8.7
Pros