Damaged is the first book to be printed under the Full Clip Imprint at Radical in association with Sam Worthington’s production company, Full Clip Productions.

Damaged is the story of two brothers, Frank and Henry Lincoln, long estranged after a violent event in their shared past which forces them apart. Over the course of 35 years, the brothers pursue separate paths, each upholding his own vision of the law—Frank, an upright citizen, becomes a distinguished veteran of the San Francisco PD, while Henry, a hardened vigilante, enforces the sort of justice the law cannot stomach. As the brothers approach retirement, each attempts to train a younger protégé in his image. Sparks fly as the two brothers and their differing views collide—and the fate of the city may hang in the balance. 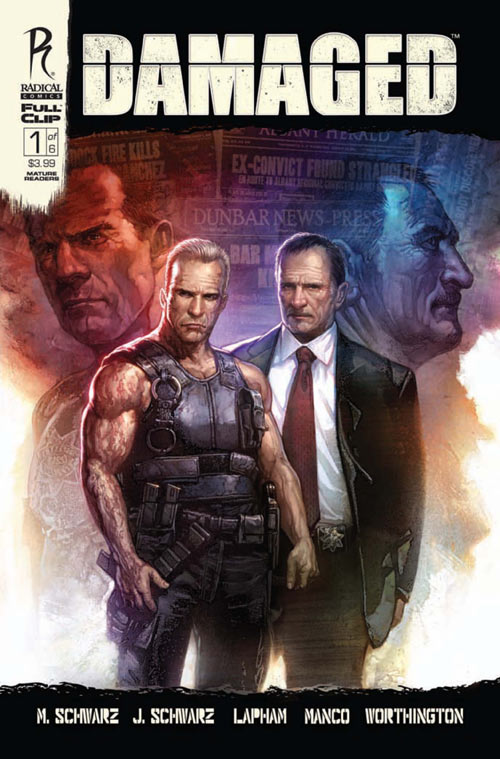 A big muscled anti-hero abounds in this issue and he’s packing some serious heat. Henry, this comic’s version of the Terminator, is by far the most entertaining part of the issue, giving us some of the greatest (and not to mention only) action-packed scenes. The opening of the comic is great, giving some fast-paced action. Then after about a dozen pages of action, slight problems come up with the story. It becomes slow-paced, which is magnified by the fast-paced action that the issue started with. The pacing makes the story feel outrageously disjointed, but has an interesting symbolic meaning—if you squint hard enough. The bulk of the issue is focused on a lieutenant Frank. The pacing differences between panels with Frank and Henry could artistically show how different their personalities are, with Frank thinking deeply about everything and Henry pulling out the literal big guns. The rest of the story is solid, despite the clichéd police force that cares only about looking good. This corruption in the force is actually written very well and would be more interesting if the comic did not start us off with the monstrous high that was Henry blowing the bad guys away. Another problem is the sound effects the comic insists on using. Seeing the words “Boom!” and “Beep” splayed out on a panel takes the seriousness out of the scene and makes the reader feel disconnected from the story.

A bigger problem with this issue is the artwork. The many close-ups on characters’ faces in this issue, while managing to convey some emotional meaning, are almost completely destroyed by the odd pencil work covering their faces, making it look like blackheads are abundant on their skin. When the art shines, it is only thanks to the colors. There is usually too much shadowing, but also great uses of lighting that remind me of a movie. The colors also stay pretty dark and dull, giving the comic an authentic comic noir feel.

The comic has a few rough patches, but delivers on almost every level with likable characters, a beautiful assortment of colors that almost manages to distract us from the poor artwork, and an intriguing storyline that has me coming back to read the next issue of Damaged—pick it up for that comic noir feeling or just to watch Henry work his magic with a gun. Either way it’s a win. 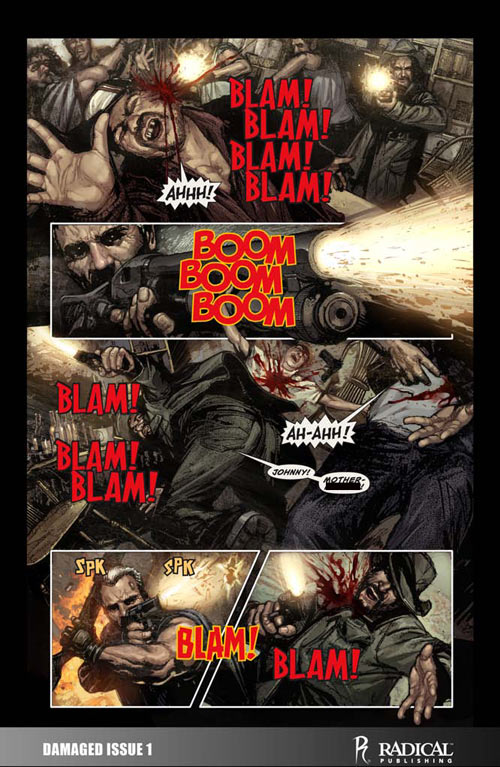 One of the best parts about this book is the big slap in the face that the book kicks off with. Some old-school, hardcore S.O.B. extracts his own brand of justice on some local scum in a bar…classic. That does a great job grabbing your interest right off the bat. Then it slowly guides you into the tale of Lt. Jack Cassidy and how the “Fat Cats” want him in charge because he’s their new favorite golden boy. They want him to be Frank Lincoln's successor due to the fact that he's retiring, he’s lost the drive and they want him out, doesn’t want to play ball, he’s old and sucks, and so on. That’s where the story hits the heavy political cop angle and to tell you what, it really worked. Add a little backstory on the Mr. Hardcore and put the two protagonists together and there you go. It felt like it carried a longing kinship to the sweet 80’s cop storylines. It feels gritty, refreshing and familiar all at once.

One of the best panels in the book is when we witness a cop by the name of Isaac Lordsman watching two men burn to death in a car accident just because they had ties to the Russian mafia. Inflicting that vigilante justice is the kind of grittiness that made me smile. We need more of that in comics.

The art of Leonardo Manco does have that odd “we painted over real people, Greg Horn look,” leaving some of the panels stiff and awkward looking, especially when the action gets heavy. The fire fight in the bar has a trucker catching a bullet in the face. The look on his face cracks me up every time. Not that the art work is bad by any means but it does take a second to get adjusted to that style.

Overall, David Lapham's (Stray Bullets) telling of Michael and John Schwarz’s Damaged is an interesting read right off the bat. It has a healthy blend of drama and action. So if this is the kind of material that Radical and Full Clip are going to be responsible for, then sign me up!