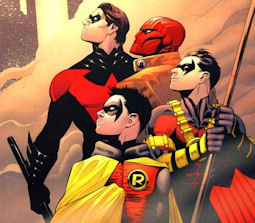 I know. Usually, you’d say someone died too soon or before their time. This just wasn’t the case with Damian Wayne, though. Damian lived for at least a year and a half longer than he really should have. It’s nothing against the character. I, like many others, really came to like the little guy. But the harsh truth of the matter is that he’s the root of basically everything wrong with Batman in the New 52.

DC Comics made things hard for themselves with the timing of the New 52. See, they were impatient about it. They wanted to reboot their universe, and they wanted to do it now. But now really wasn’t a good time. Geoff Johns was just about to start the final lap of his epic Green Lantern run and had yet to get much traction in justifying Barry Allen’s resurrection. Brightest Day had just established new status quos for a handful of characters. And most importantly here, Grant Morrison was in the middle of Batman, Incorporated.

This was a problem, so DC chose to reboot its universe AROUND Batman, largely leaving Gotham City alone unless you were a Batgirl. It was the only alternative DC left themselves with other than unceremoniously cutting Morrison’s run off and pissing off one of the two creators they depended most on. So after a short break, Batman, Incorporated continued on almost like nothing universe-altering had just happened and only really had to dance around the changes to Barbara Gordon and Stephanie Brown. This was a bit troublesome, but DC had allowed Morrison to keep the primary thing he needed to go on.

Damian Wayne was allowed to be a part of the New 52.

So immediately after debuting the new continuity with a streamlined five year timeline, DC was tripping over Batman’s ten year old son as the current Robin. Five year timeline, ten year old son. It was a little hard for readers to overlook, so it didn’t take long for DC to try giving themselves some wiggle room by saying Batman had actually been around prior to the five years. I don’t know that they’ve ever gone on record as saying he’s been around for 11 years, though. Either way, it effectively robbed Superman of the “first superhero” status the New 52 had just restored to him, and it did that no matter how much DC tries to differentiate Batman as an “urban legend” rather than superhero. 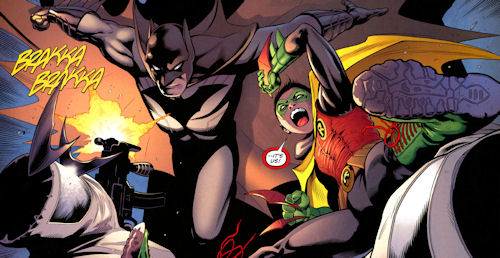 Keeping Damian around was obviously not as simple as DC thought, and his presence rippled through the Bat-franchise in less than positive ways.

As the current Robin, Damian meant that at least three other Robins had come and gone in the five years prior to him. Actually, it would be more accurate to say four years prior to him since the New 52 began with him already having served as Robin for awhile. This mean the entire Robin careers of Dick Grayson, Jason Todd and Tim Drake had to be reduced to fit with a period of just a few years.

The only one this wasn’t really a problem for was Jason, who wasn’t meant to have lasted long as Robin anyway. Although, the thing about it now is that his one year stint doesn’t seem so short when it must be pretty equal to how long either Dick or Tim lasted.

Dick, on the other hand, has suffered quite a bit from continuity shrinkage. How strong could his father/son relationship with Bruce Wayne be if he became Robin at 15 and left at 16? Granted, I’m making up those ages, but it is basically what the New 52 is telling us. He couldn’t have been around for much longer in order for Damian to have been our latest Robin. On top of that, he’s had to keep his time as Batman as part of his New 52 history, truncating such an important milestone for the character and forcing it to have happened earlier in his life. 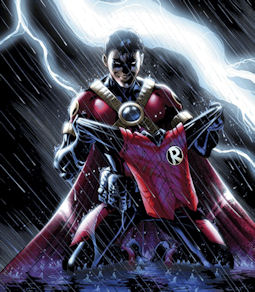 And then, there’s Tim. Poor, poor Tim. He wasn’t any stranger to suffering due to Damian’s presence even before the New 52 when he initially got booted out of the Robin identity. But the New 52 has taken that even further, rendering him just about worthless as a character. What is he now? Some kid Batman had as a sidekick one summer who was never even an official Robin? But he has wings! That’s a good enough trade-off for the utter mutilation of his history, right? Honestly, I think Tim would have been better off with the likes of Wally West, Donna Troy and his love interest Stephanie Brown in continuity limbo. There’s something to be said for not doing anything at all with a character if there’s no room to do anything good.

Regardless of how well it is actually being done, other parts of the DC Universe have gotten to roll back the clock and build things that are fresh or new. Superman, Aquaman, Wonder Woman, etc. They’re all at it. Meanwhile, Batman has to play damage control around the existence of a ten year old son. We were robbed of a true New 52 continuity for Batman. I’m talking a continuity where Dick Grayson is still coming into his own as Nightwing, where Bruce Wayne and Talia al Ghul are strained lovers rather than acting like  an old divorced couple, where Tim Drake is a rookie Robin and just where Batman’s continuity makes sense and actually fits with the rest of the DC Universe.

All it would have taken is a crazy thing like coordination. Grant Morrison could have killed Damian Wayne a little sooner, and DC could have held off on the New 52 a little later. Would that have been so difficult? Don’t tell me Morrison truly needed all those issues to tell this story. I’ve been reading it. He didn’t. Nor did DC really have any compelling reason to launch the New 52 exactly when it did.

Damian Wayne was a great character, but if his destiny way to die, it should have happened before the New 52. We could have enjoyed his story and had a Batman continuity that was allowed to be fresh and new.