Daomu # 2 follows Sean Wu, who just so happens to be the heir to the ancient Daomu legacy. He continues to investigate the the mystery left by his slain father, Steven Wu. Once the prodigal son of the Daomu, Steven had gone rouge and become a mercenary for hire. All that managed to do was to gain him some unwanted attention. Knowing that his death was immanent he attempts to reunite with his son Sean and pass everything onto him.

Sean now finds himself at his father's house in the basement and staring face to face with a six armed humanoid in a coffin. Sean continues to stare infatuated with the creature until the voice of Tsai, Sean's uncle gets his attention. The two go back up stairs and Tsai begins to explain Stevens mind state in his final days and how Sean is to take up the Daomu legacy. To top it all off Sean learns of an inheritance and how he needs to go on the initiative to prove his worth to the rest of the Daomu crew. Sean blows all of this off until Tsai shows him a set of 1,000 year old scrolls that are a map to great fortune. If Sean takes him up on his offer and becomes the new leader, he'll never have to worry about anything ever again. 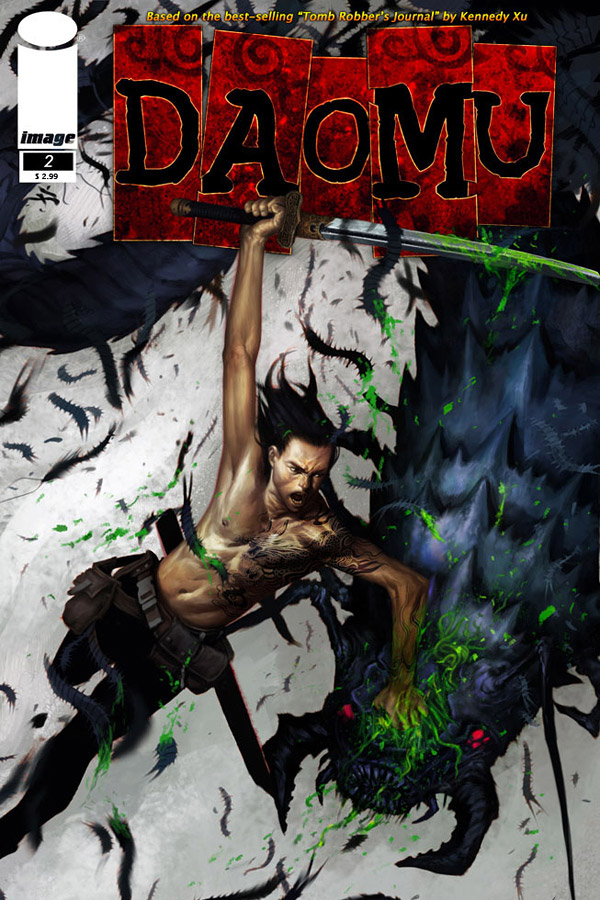 A week later Sean is in the middle of nowhere China with a team heading to the tombs entrance. He meets his father's number one student Pan and Kilan who's fingers are all the same length (random). After wondering through the epic terrain they finally dig through the ground and find an entrance to a great tomb. Inside the tomb they find the remains of of another team that was attacked by the cave's roots and some that were decimated by an unknown beast. Then from out of the blue an army of incests pass through followed moments later by a massive spider. The team pretest in fighting it. Afterwords the roots lining the cave reach out a snatch Sean and drag him in front of what looks to be a sunken mansion.

Kennedy Xu writes the Daomu and Ken Chou does the art. Over all the book looks pretty average. Granted this issue is a bad representation due to the fact that nothing happens. It must be hard to make a sixteen plus pages of dialog look interesting. That's another thing, don't say it, show it. Kennedy's writing seems to just drone on and on in this issue. It feels as if they just wanted to hurry up and get their own boring story out of the way so they could try and get to some action. All the dialog does is make you hate Sean. He's a cry baby twenty-something with some daddy-issues. Get over it Sean because you're not a likeable character and you talk too much. Here's hoping issue three picks up and that Sean shuts-up.