"Elektra Company"
By: Jim Bush | Comic Reviews | June 2, 2016
After the new volume of Daredevil by Charles Soule and Ron Garney went through its first five-issue arc, I was feeling rather worried about this new run since I found the story lackluster. However, Daredevil #7 completes a strong two-issue interlude, featuring Elektra, that gives some momentum to the new series. Elektra is at the center of an effective mystery that may or may not involve Daredevil and Matt Murdock. Along with impressive art by Matteo Buffagni, Soule also contributes a good script that makes Daredevil #7 one of the best issues of the new run. There will be SPOILERS. 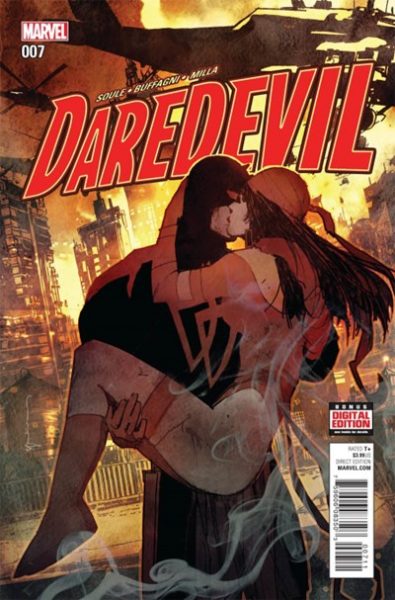 In Daredevil #7, we learn a bit more about the mystery of Elektra’s daughter as she reveals how she became pregnant when she was training with Stick and gave up the child. But she was recently given evidence that Daredevil was involved in the girl’s disappearance. This of course comes as a shock to Daredevil (who never knew Elektra had a daughter), but he wonders if there is a possibility that the girl could be his own. The daughter angle is intriguing and it's unfortunate that it ends up being a red herring, a false memory implanted into Elektra to get to Daredevil. Daredevil seems to know who did this but we are not told. For her part, Elektra resolves to give payback to those responsible for her thinking she had a daughter.   Elektra’s presence adds a lot to this issue, and her anguish over this child she loved even though she gave her up is palpable. In some ways, the fact that she is just a conduit for relaying a message to Daredevil feels like a lost opportunity. However, the set-up of Elektra’s supposed daughter and then the revelation that it was all made up is revealed effectively, so that the twists are unexpected. Additionally, Soule does a nice job with the dialog for both Elektra and Daredevil. We get a sense of Elektra’s sadness and desperation and Daredevil’s confusion and dawning outrage. 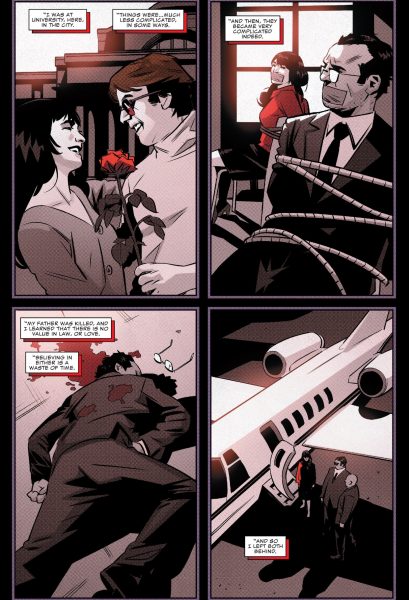 An element of the story that becomes rather awkward is that Elektra does not know that Daredevil and Matt Murdock are the same person. The extent of who knows Daredevil’s secret identity now seems to be just Foggy Nelson. While I understand Marvel and Soule’s impulse to get Murdock’s identity secret again, it seems a little odd to make it secret even from those, like Elektra, who knew Daredevil’s identity prior to it becoming public knowledge during Brian Michael Bendis' run (and then officially during Mark Waid's tenure). Soule seems to be intentionally building up this story of Daredevil’s secret identity, and while it’s not necessarily something I think is the best direction, it’s not too obtrusive here.   The issue is hardly perfect, and some of its weaknesses have already been mentioned. While I get and respect that this is a short story, I feel like Elektra deserves a bigger place in it, and strangely a story that initially seems to be about her ends up being entirely about Daredevil, which feels something like a slight to a strong character like Elektra. While Soule’s writing is pretty good in this issue, there are weird repetitions, such as when Daredevil thinks and says the expression “pretty damn” in consecutive panels. 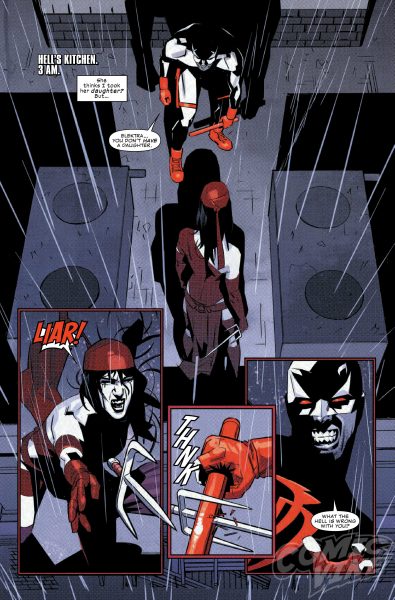 One element that comes through very well is the art of Buffagni. While I thought that Garney’s expressionistic style really started to come together towards the end of the previous arc (even as the story didn’t live up to it), it is still a bit unorthodox. Buffagni has a nice hybrid style that is more realistic than Garney’s, which is an interesting break, especially combined with series colorist Matt Milla. Where Buffagni really excels is in his panel compositions, such as a double-page spread that features a center panel and side panels briefly telling the story of Elektra’s pregnancy. It’s a lovely piece in the issue and highlights one of Buffagni’s strengths as an artist.   The last two issues of Daredevil have quelled some of the worries I was starting to have about Soule’s work on the book. I think the first arc was trying to do too many new things at once, and fumbled on some of them. It was wise to shift to an established character such as Elektra, and Soule had a compelling though brief story to tell with her. The conclusion still leaves open the identity of who made Elektra think she had had a daughter (was it Stick? One of Daredevil’s enemies?), so I think Daredevil #7 will be important for future issues of the series. Hopefully, those issues feel more like the last two and less like the first arc.
Rating
7.7
Pros