Dark Horse – All The News You Need 6/30 Edition

By: | Comic News | July 1, 2011
I'm back again with another massive news update, this time we have a slew of Dark Horse news and Comic Con exclusives. Let's get it rolling shall we?

Chimichanga! - A bearded little girl that saves her traveling side-show with the help of a creature she found in a witches egg... what more is there to love? I missed out on this book originally, but thankfully it's returning to its bi-monthly schedule from Goon creator Eric Powell. The deluxe hard cover collects the first three issues and has a new ten page story made just for the hard cover.

Eric Powell, the Eisner Award–winning creator of The Goon, takes readers on the road with a traveling show populated by a bizarre and endearing cast of characters in Chimichanga ($14.99), his first-ever tale for audiences of all ages! In celebration of this release, Dark Horse and creator Eric Powell have extended their initial order incentive. Now through July 6, for every three copies of the hardcover that you order, you will receive one free copy of the original issue #1—signed by Eric Powell! 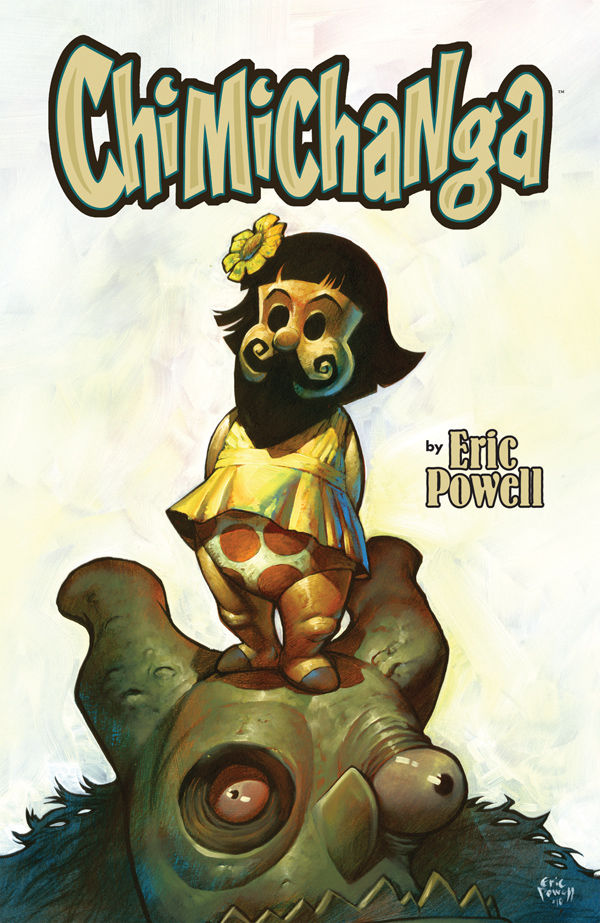 Exclusive DOMO - Alright Comic Con attendees, if you're a Domo fan, which a lot of you probably are, then you'll be interested in this exclusive figure only being sold at the Dark Horse booth at this years Comic Con. That is until they sell out and the toy booths jack up the price by at least forty dollars and rope desperate fans into buying at the outrageous price. Also, Dark Horse will be hosting Domo creator Tsuneo Goda at the con so if you stop by it's like a twofer.

“We have supported Comic-Con for over twenty-five years,” Dark Horse product development head David Scroggy observed, “and it thrills us to be creating a couple of genuinely special releases that contribute to the celebration while adding value for the convention. This is the greatest fan event, and since we are fans ourselves, we have pulled out all the stops!”


Scary Godmother - Dark Horse is releasing a special Ashcan edition of the Scary Godmother for retailers to use as a give away item. The ashcan is an eleven-page story entitled "Tea for Orson." The book is done by series creator and first female winner of the National Cartoonist Society Award, Jill Thompson. We'll have more on the work that won her the award in a few.

This special giveaway features the story “Tea for Orson,” from the Scary Godmother hardcover collection, released by Dark Horse last fall. Follow Harry and Orson on a fun eleven-page quest to sneak into a tea party, hosted by none other than Scary Godmother herself! As an added bonus, this Halloween treat features a two-page short, “Wild about Harry.” 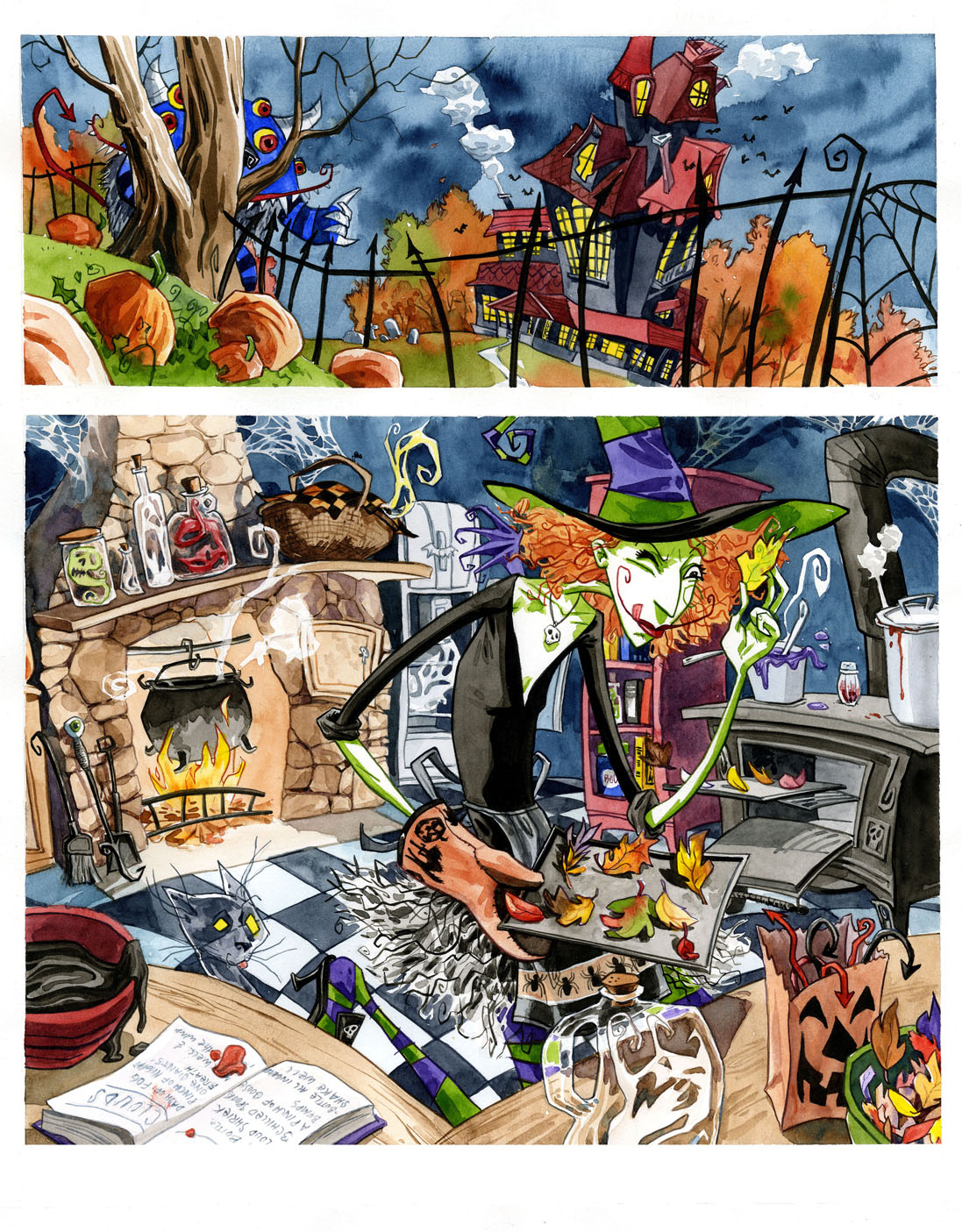 Spider-Man Syroco - Do not try to understand why one of Marvel's top characters is appearing on a Dark Horse news piece and further more why they're making the figure for the popular character instead of say Hasbro which Disney/Marvel have a partnership with. Okay now to explain it... Marvel and Dark Horse have a deal with the Syroco figures, that's it. Anyways, they're bringing this exclusive Dual identity Spider-Man figure to Comic Con in limited quantities. The figure is based off of classic Ditko art and is going to be a rare item for Syroco collectors.

As previously announced, the program will begin in September 2011 with two alternating series: Classic Marvel Characters and the Fantastic Four. This new line will be deliberately different than the common modern Marvel collectible sculpture, with features like a rougher surface texture, visible seam lines, and other slightly “distressed” aspects, such as the method of paint application.


Buffy The Vampire Slayer - As someone who just bought a friend's comic collection and thus bought a ton of Buffy books, my interest is turned to the start of Buffy Season 9 which is quickly approaching.

While she may have cut the world off from all supernatural influence and hellish dimensions, Buffy has left her best friend, Willow, powerless. Season 8 also saw the end of the long line of vampire Slayers and left our hero hated by the hundreds of girls who recently stood behind her. Newly relocated to San Francisco, Buffy can count on a fresh start, and focus on what she's good at—slaying. 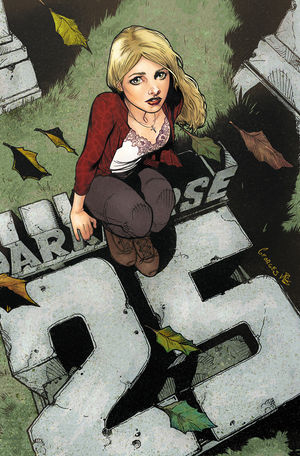 Beasts of Burden -  This is one of the most talked about books of the year and it's returning in Dark Horse Presents #4. Also I told you we would have more on this series with art from Jill Thompson and Milk and Cheese writer Evan Dorkin. First we have some preview pages from the upcoming DH Presents and second is a link to a free issue of Beasts of Burden hosted by Dark Horse.

Evan Dorkin and Jill Thompson’s lovable and crafty team of critters is back in action for a story that will tempt your taste buds and leave you wanting more! Adventure, mystery, horror, and humor thrive on every page of Beasts of Burden—a comic-book series that will capture readers’ hearts and haunt their dreams.

Award-winning comics creators Evan Dorkin (Milk and Cheese) and Jill Thompson (Scary Godmother) first introduced these very special investigators in The Dark Horse Book of Hauntings and the other Dark Horse Book of . . . anthologies, for which they won coveted Eisner Awards for Best Short Story and Best Painter. Evan and Jill will both be in attendance at San Diego Comic-Con 2011!

Looking for more Beasts of Burden? Check out the free comic on DarkHorse.com: http://www.darkhorse.com/Features/eComics/1090/Beasts-of-Burden. 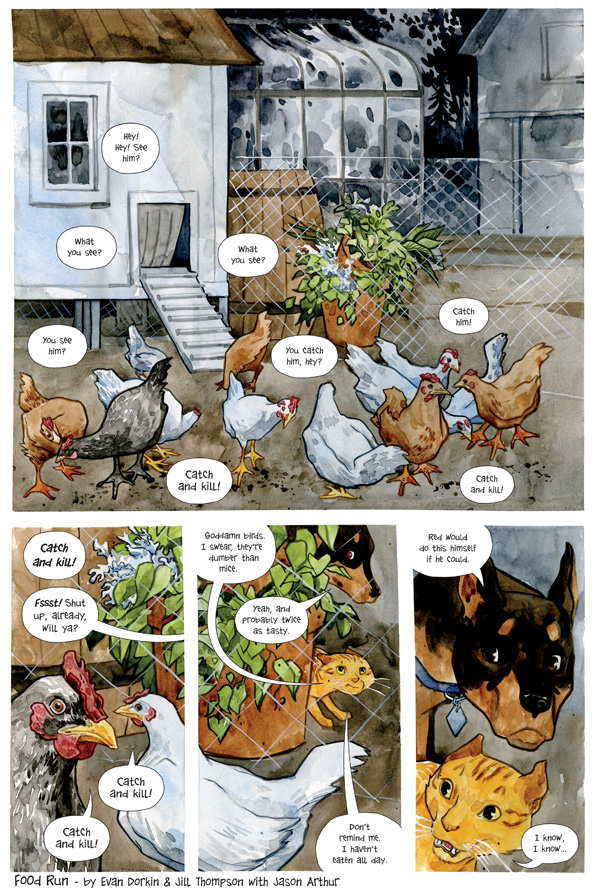 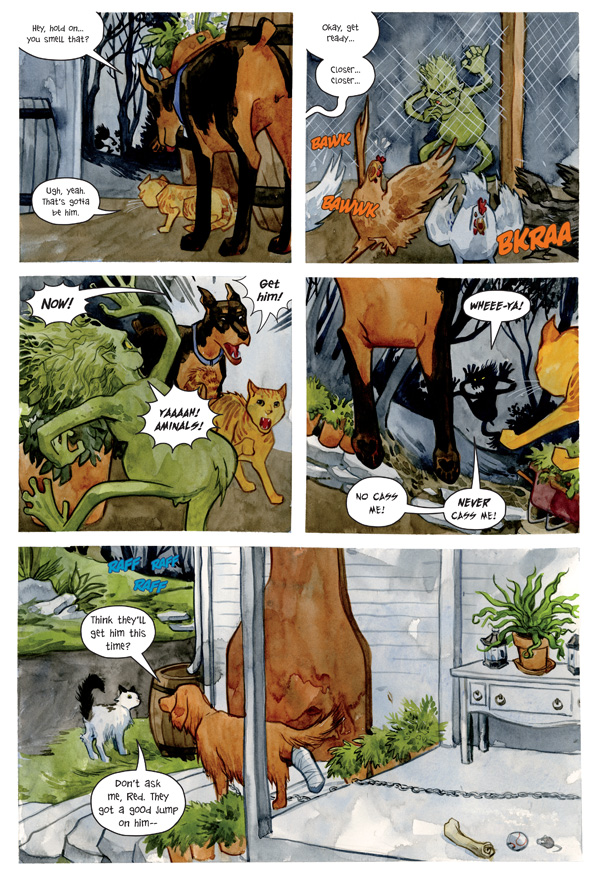 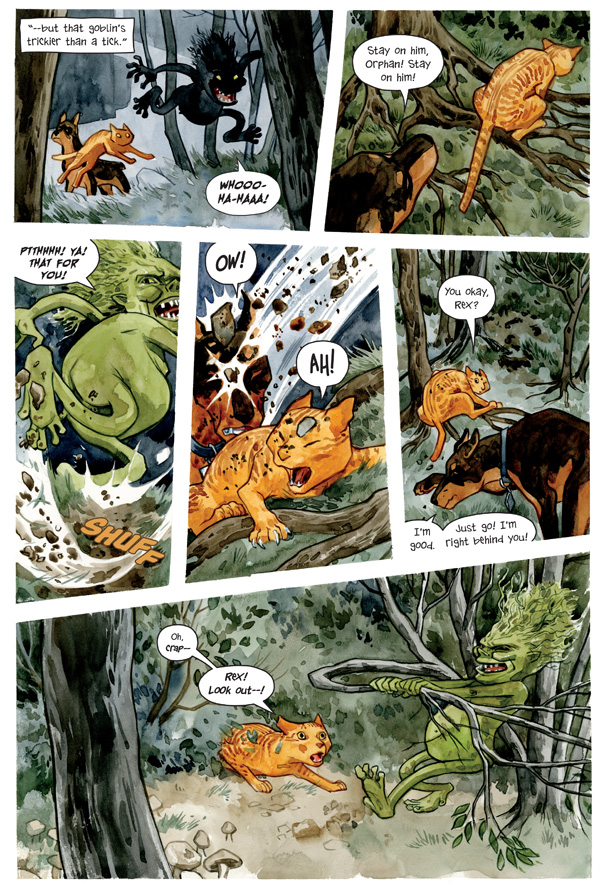 Survey Contest - It's not often that you get to tell a comic company how they're doing, but that's exactly what Dark Horse is offering you the chance to do. Also they're giving away some Buffy trades so if you have two minutes check out this survey and see if you're a winner.

The Goon - With the release of the Goon #34 this week, creator Eric Powell took a moment to share his thoughts on Dark Horse's blog and frankly it's a great entry that highlights how Powell has managed to keep the Goon interesting and fresh for the last decade. I recommend reading the entry, but in the mean time how about a sample?

"I gotta keep this shit punk rock: the things I want to draw and the stories I want to tell. Because if I can’t keep myself interested, no one else is going to be. I’ve been coming to the realization over the last few years that The Goon is just not for everybody. Nor should it be. The Goon is for a twenty-four-year-old struggling Tennessee comic artist scared out of his mind he was gonna have to go back to hanging drywall at any moment. That guy did The Goon because it was his escape."

Well there it is, everything you need to know from Dark Horse. Be on the look out for more news as Comic Con is just under a month away.