By: Max Alborn | Movie News | May 26, 2012
Any memory of The Dark Knight Rises marketing campaign being subtle and quiet has been destroyed by this last week, as several character banners and posters have made their  debut to ramp up the media blitz for Christopher Nolan's final Batman outing.

The marketing crew for "Rises" didn't start the week strong, releasing the film's final poster to low fanfare. The fact that it looked like a poorly photoshopped version of the teaser poster didn't help. Then it stepped up its game with several character banners featuring Batman (Christian Bale), Bane (Tom Hardy) and Catwoman (Anne Hathaway), all taking their moment in the spotlight while heigtening the scale Nolan's swan song aims to achieve. Everything about it screams "war" and "revolution."

Now, thanks to some keen observers, we've learned that within the released posters/banners, there was a secret QR Stamp that led users to unlock the following Catwoman-themed poster, and it's a special number. 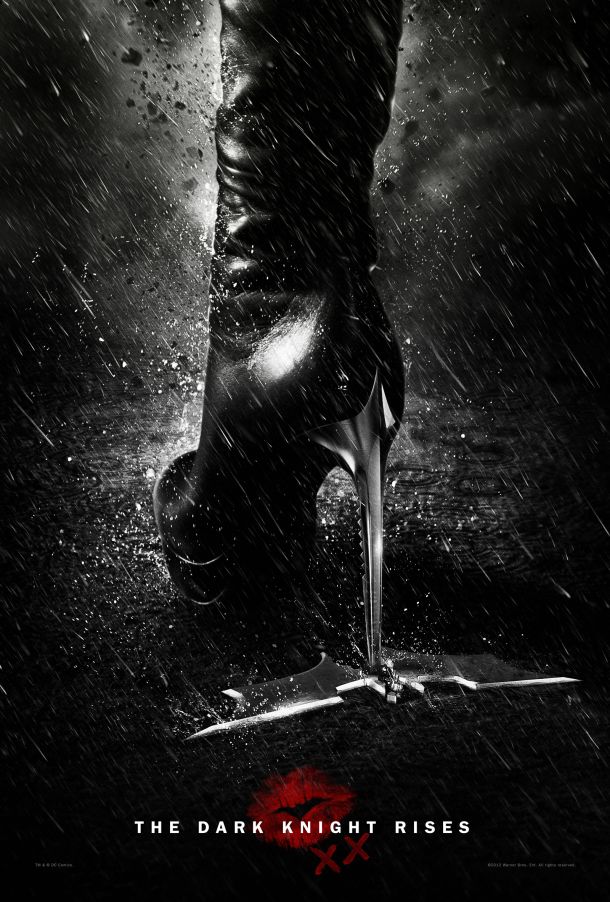 Considering the scale of all the materials released this week, this poster remains rather minimal, and reminds us of the Joker-graffitied posters that checkered The Dark Knight viral campaign. Going with the themes of the officially released posters, we've got storm and debris coming from all sides and the concept of a broken Batman. Instead of using Bane, we've got Ms. Kyle with her serrated (awesome!) stiletto laying down some punishment. Given that the recent (again, awesome) trailer paints Catwoman as an ally of sorts, this poster continues the trend of putting her on both sides of the friend/foe fence. How much pain can she cause Batman? We'll have to wait another two months to find out ... dammit.

In case you missed them, below are the banners from this week. You can check out the other posters here.