By: Justin Moody | Comic Reviews | June 17, 2010
The terror that flaps in the night is back! Boom! Studios continues to adapt some of Disney's greatest franchises. Finally the afternoon cartoon block gets the respect it deserves with Darkwing Duck coming to comics.

Darkwing's new story begins with his alter-ego, Drake Mallard, waiting in line at Starducks for coffee. Then a strange power surge occurs that only affects Starducks. DW and Launchpad smell something fishy and decide to investigate. Low and behold it's Megavolt behind the attack. 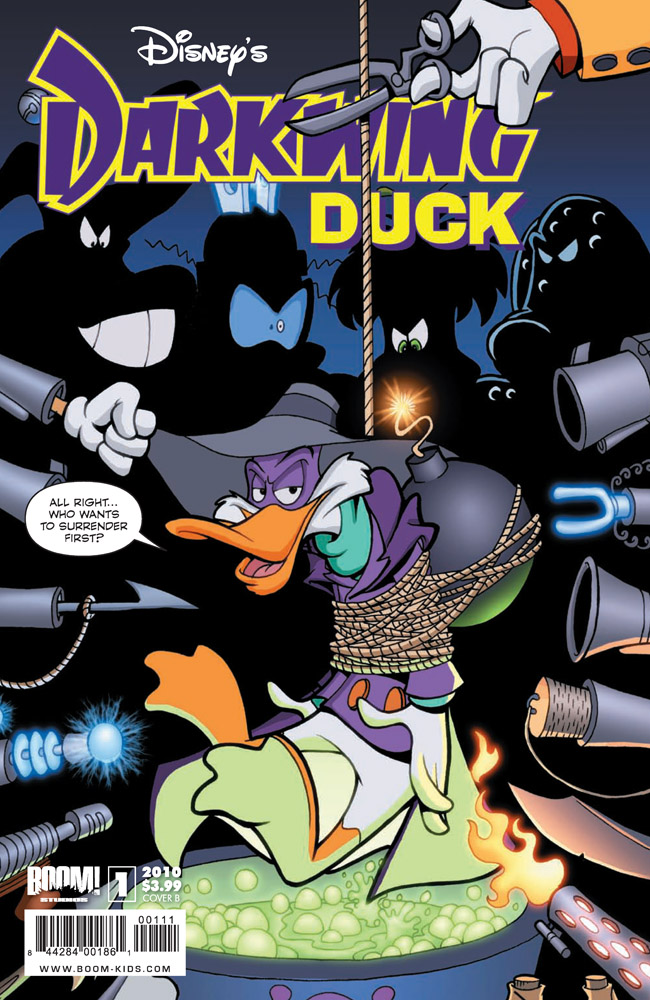 We cut to TV feed celebrating the last spotting of Darkwing Duck and his battle with Megavolt. Mallard is sitting in the cafeteria at Quackwerks listening to the reports quietly until the reporters attack his fashion sense. Mallard is angry, but unable to do anything about the report. He attends the mandatory company meeting which introduces the newest crime-bot to keep the peace in St. Canard.

Mallard is unable to keep his mouth shut anymore and sounds off about the bots. He points out that they don't have the human touch that the police and vigilantes once had. Mallard goes on to point out that Quackwerks now employs the ex-police officers and the ex-criminals, wondering how far the companies hand truly stretches.

His speech is short lived as he's informed of his daughter, Gosalyn, being in trouble at school. While longing for younger days Mallard heads back to his cubical that he shares with the former criminal... Megavolt or Elmo as he's known by these days. It seems that even super-villains can't catch a break with the crime-bots in town.

To begin with, this story is brilliant. To convince you of that I will say that if you were to take this exact story and place Batman or even Spider-man in the same story it would still work. It's a mark of a great story to be able to remove the characters and still have it be successful. What it is, is Darkwing Duck's return and if some people write it off as a kid's book they will be missing out. 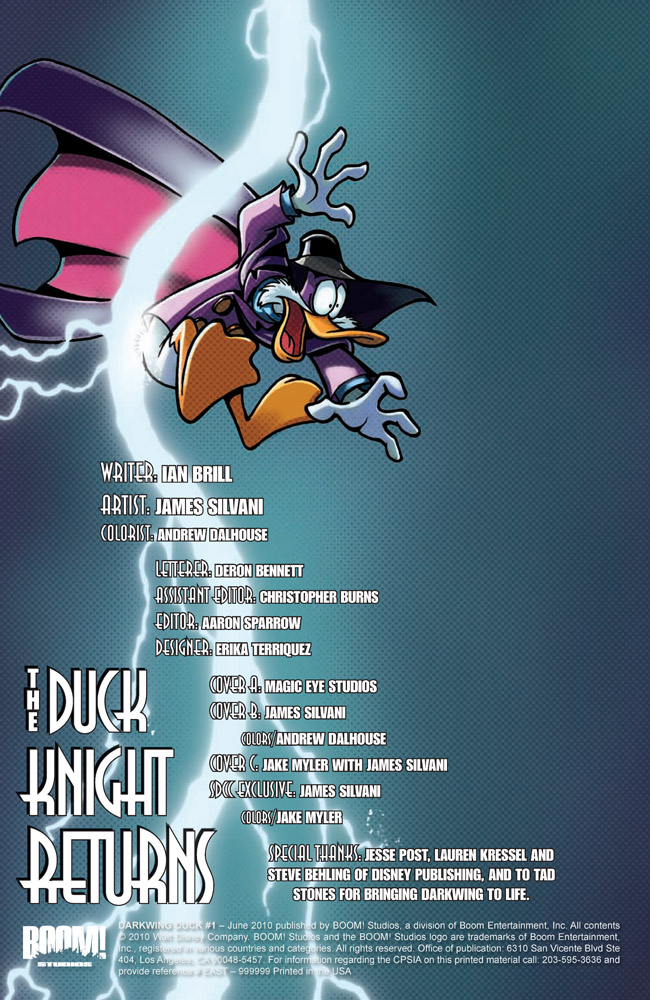 The most shocking thing about the story is that writer, Ian Brill (Zombie Tales), doesn't play on reader's nostalgia of the cartoon. Granted all of the villains and heroes are present, but they're actually there for a reason and not to cash in on fond memories. Brill does a fantastic job of reintroducing the world of Darkwing Duck in a meaningful and refreshing manner. It's a difficult task to write dialog that reads the way an animated cartoon would, but Brill nails it. All of the vocal inflections and mannerisms are present with each character making it wonderful to read.

With this being based off of a cartoon it's very important that the art look right. Artist James Silvani (Muppet King Arthur) not only captures the look and feel of Darkwing Duck and St. Canard, but he adds life to it! The city is full of people like never before. Even in the office place there are busy bodies moving and shuffling about in the background. Darkwing and the rest of the cast are spot on, making it amazing to look at. One thing the comic has going for it that the cartoon will never be able to touch is the coloring. The color is so rich and full while maintaining the look and feel of the cartoon.

Since the announcement of this book I have been waiting with bated breath for its arrival and I must say that the book lives up to the hype. I would even say the cartoon has a strong chance at a revival if enough people take interest in the series. Boom! Studios does an amazing job of bring Darkwing Duck back to life. They treat the material with respect and set up DW for new and exciting adventures.

I wonder how much my first issue of the original Darkwing Duck series is worth. Follow Dustin on Twitter where he follows Darkwing Duck. Be sure to leave a comment welcoming Darkwing back into the world of comics.