Dawn Of The Planet Of The Apes Review: Apes Still Strong

By: Mitchel Broussard | Movie Reviews | July 14, 2014
You probably already know whether or not you want to see Dawn of the Planet of the Apes. This is a franchise with a very particular set of goals that are wholly different from the usual summer blockbuster fare out there. It wants to sweep you with spectacle every now and then (particularly in the last thirty minutes), but also makes you think. It is the natural, ah, evolution if you will, to movies like Inception and The Dark Knight, albeit far less byzantine. But that is okay, you do not have to juggle twenty bowling pins lit on fire to be impressive, learn to pull back and master the basics and grow from there. That is where Rise of the Planet of the Apes began triumphantly three years ago, and where Dawn finds itself now. They nailed the opening reboot of this once stagnant franchise with Rise, and Dawn has no shortage of powerful imagery and fascinating character moments, but it also feels like the unfortunate middle child to the inevitable third movie coming down the line. 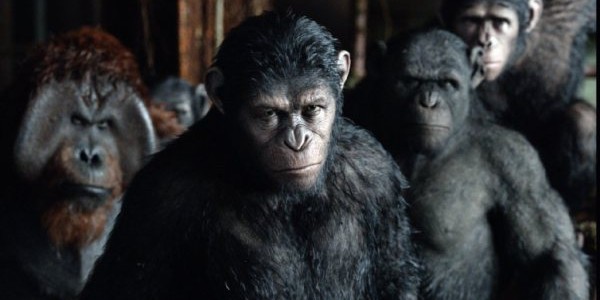 Picking up “ten winters” after the events of the first movie (and two since any human sighting), Caesar (Andy Serkis) and the rest of the Apes have taken up residence in Muir Woods, just north of a decimated San Francisco. Thanks to the ever-popular CNN news footage every post-apocalyptic flick appears to be required to include in its opening credits nowadays, we get a quick glimpse at the world outside the city, and it is grim. The Simian Flu killed off a vast majority of humanity, and the survivors are left abandoned and alone to fend for themselves. You hope for a minute that the movie will abandon the ever-growing stagnant setting of San Francisco to show us some elsewhere chaos, but no such luck. Caesar and his brood have gone a long way from the cages of the animal clinic in the first movie. They have a makeshift community set atop a cliff-side waterfall, filled with classes teaching how to read, write, and speak, towers for guard patrols, and a little mini-palace for the royal family. Said family consists of Caesar’s wife Cornelia (Judy Greer), his son Blue Eyes (Nick Thurston), and an unnamed newborn. WETA’s amazing work on the Apes doubly ensures that you always know who is who, from the small details of paint on Caesar’s face to the bear scratch on Blue Eye’s chest to Koba’s gnarly eye scar. These movies should have the same issue as Transformers where you never know who is who, but there is such personality bursting from each tiny little face, it is never an issue. 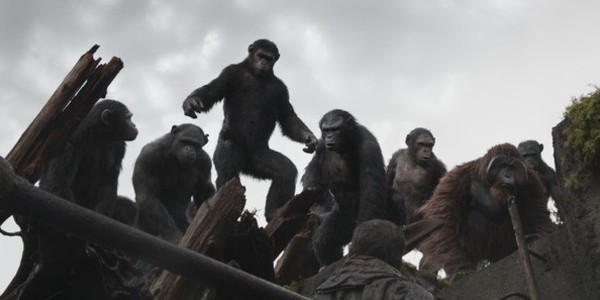 It is a fascinating sight, those of Apes fishing on a riverbed and patrolling the camp’s edges, and wholly satisfying for franchise fans that remember little Caesar being cradled in James Franco’s arms. Franco's and Freida Pinto's characters are assumed to have died in the viral outbreak after the events of the first film, which has an unexpected heft to it once Caesar revisits his old home. Serkis is expectedly exceptional as the benevolent leader of the Apes; he, at this point, is Caesar. His constant worrying over his teenage son (and his son’s constant ignorance), his marveling at the family's newest member, and his love for Cornelia are never, ever questioned simply because he is not human. This is a young, battle-hardened ape with memories and doubts and burdens. He is also completely badass. If there is any fault that can be placed upon him, it is that he is so good, he brings out the shortcomings in everything around him. Mostly being that the human characters just are not up to snuff. Early in the movie we meet a band of travelers from San Francisco that are trying to re-start a nearby damn to bring power back to the city. Jason Clarke as Malcolm is our Caesar analogue here, and he is fine. A bit bland and eternally misty-eyed, but you buy his need to convince the Apes to not go to war. Keri Russell plays Ellie, Malcolm’s new wife and former CDC nurse. There is also Malcolm’s son Alexander (Kodi-Smit McPhee), the leader of the human colony of San Francisco Dreyfus (Gary Oldman), and the token anti-Ape radical Carver (Kirk Acevedo). 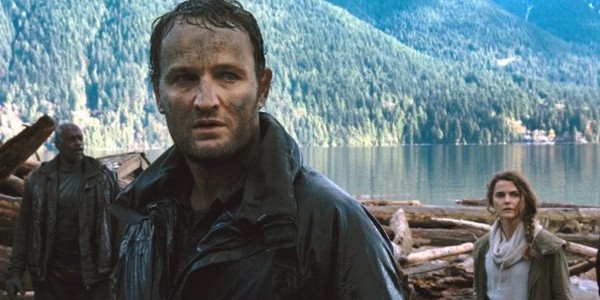 Their problem is that because they each have a perfect comparison to an Ape (Caesar/Malcolm, Koba/Dreyfus, Blue Eyes/Alexander, etc) their misgivings are more apparent. Blue Eye’s internal struggle of following in his father’s footsteps yet trying to be his own man (or Ape, I guess) is immediately enthralling. Alexander’s and Malcolm’s relationship is essentially nonexistent. Some throwaway lines attempt to saddle them with dead family member scars, but it falls quite flat. (Though Alexander giving giant Orangutan Maurice an English lesson using Black Hole is hilariously appropriate). Even Rise had interesting characters in Franco and Pinto and John Lithgow. It was smart to give more time to the Ape’s development, but at the end of the day you begin wondering how far this franchise has to go before humans need to have big roles at all. This story required it, and no doubt it could have been done better, but the possibility of a nearly all-Ape entry in the series is absolutely tantalizing. 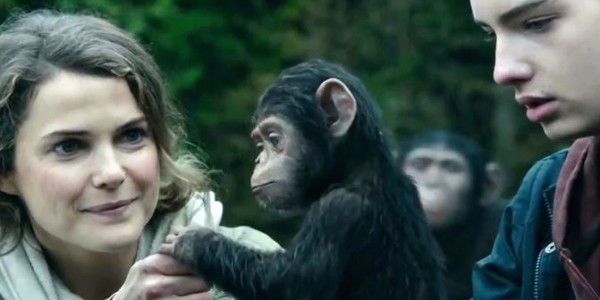 Its pace may put some off, but there is power to it, too. It is slow, lackadaisical, almost, in its steadily unfurling scenes of Ape-on-Ape conversations discussing the pros and cons of war with the humans. But the beauty and impact of it sneaks up on you. It has two characters face off and talk where a lesser movie would have had a full-scale throw down. A middle-act shake-up (and events leading up to it, and those after) are downright Shakespearean in their dramatic efforts. Once you realize where the movie is going in those moments, you may forgive its more deliberate pacing in the first hour or so for the frantic scurrying of the last half. It is impossible not to respect a movie where bonkers action actually serves to move the story forward, but it is also impossible not to wonder if those spurts of violence could have been spread around more evenly. Director Matt Reeves (Cloverfield, Let Me In) proves his worth in goose bump-worthy shots of Ape mayhem; a long, continuous scene with a particular Ape invading and controlling a tank to turn the tide of a battle is utterly marvelous. The music’s cacophony of piano trills and fun, almost xylophone-like sounds help add to the giddy nature of it all. The movie never loses its grimness, but it is willing to accept the zany nature of a story about Apes going to war by double-fisting machine guns on horseback every now and then. 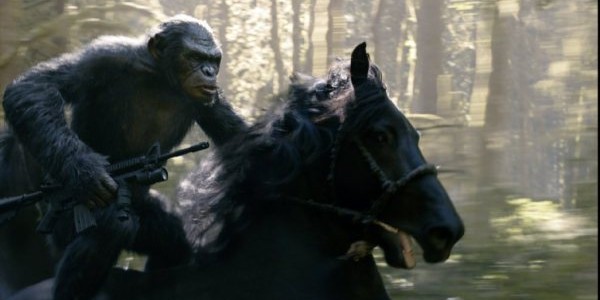 It is worth seeing how that war turns out, but once all is said and done, nothing feels accomplished or changed that will have far-reaching effects on the franchise to come. Most of the Planet of the Apes movies (and all great sci-fi) are about something deeper: be it racism, classism, or the dangers of genetic experimentation. Dawn does not exactly carve out its own unique issue of the moment (although perhaps gun control could be argued), but it does reiterate upon some well-worn issues more successfully than its predecessor. It is, essentially, a movie about a race war disguised as a species war. It is smart, but almost feels smart-by-proximity: as in proximity to normal dunderheaded blockbusters like the recent Transformers: Age of Extinction. It may be a so-called “thinking man’s blockbuster”, but it will not splinter your brain into a million little pieces the act of which you will never recover from. It is smart in an understated, quiet way. It shades its characters with about ten different varieties of gray and then asks you to choose a side. It is a solid summer flick, with some exciting set-piece moments and Oscar worthy performances by folks you cannot even see, but with awkward pacing and a back-loaded action heavy final act it is also not the perfect summer action movie it aspires to be.
Rating
7.8
Pros