By: | Comic Features | February 26, 2011
A hero is an upholder of everything good and just. Having the powers of a near god or being able to deduce the greatest of mysteries doesn’t mean anything to most heroes. Heroes have certain qualities that put others to shame. Qualities like: justice, right-and-wrong and putting others first is just a day in the life as a hero. That’s why Power Girl knows what she is doing in the field of battle.

Being one of the multitudes of Supergirl’s, thanks to alternative universes Power Girl was born on Earth-2’s doomed planet of Krypton. Zor-L learned of Krypton’s destruction to late to make a ship for him and his wife, so having a ship built for one person, Zor-L placed his infant daughter in the ship and rocketed her away from the planet. Having shipped off his daughter at the same time as Jor-L, Kal-L’s ship landed before Kara’s. The ship that Kara was placed in was slower than Kal-L’s and it took decades for her to finally arrive on Earth. During the trip Kara’s ship was called the Symbioship, which kept Kara in stasis for the entire ride. While she was in stasis, her mind was virtually growing with the laws of Krypton as her body grew. She interacted with her parents and friends, and continued to learn until she was a young adult. 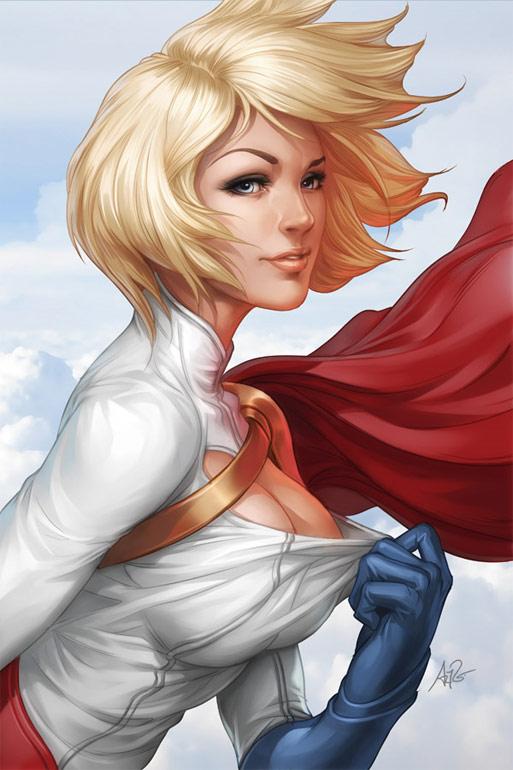 Finally arriving on Earth Kara was portrayed (at that time) to be in her early to late twenties. In modern times, she is said to have landed at the age of eighteen. Having only experienced a small life on Earth, Kara was reclaimed by her Symbioship. The Symbioship had put her in stasis once again and projected that she was still on Krypton in the city of Kandor. Kara had a happy life in her virtual world; she was even married and had a child. However thanks to the help of a newspaper reporter named Andrew Vinson, Kara was freed and the two of them destroyed the ship so that Kara wouldn’t be reclaimed by it yet again. After that Kara met her cousin Kal-L who had become the hero of Metropolis, Superman. He had lived a happy life as protector, and also had a wife named Lois Lane. Reacquainted with her cousin, Kara became the hero Power Girl. She has helped the Justice Society of America, and has a close relationship with Helena Wayne, daughter of Bruce Wayne and Selina Kyle.

With Crisis on Infinite Earth changing everyone’s origin and reshaping the DC Comics universe, the continuity of Earth-2 Superman and Power Girl ceased. She believed to be Superman’s cousin as she did before the reboot. However, her origin was retconned; Kara told that she was a descendant from an Atlantean sorcerer Arion and was frozen for decades until the present. At this time the Justice Society of America disbands and Kara joins the Justice League of America. While working with the Justice League Europe, she gets badly injured and looses the power to fly and all of her vision powers. Superman assisted in the surgery using his heat vision and in the end Kara is left weaker than before. With time her powers came back to the max and she regained her lost super abilities.

In the 1994 Zero Hour, Kara gets mystically pregnant and gives birth to a son named Equinox. While Power Girl was a minor character in Zero Hour, she witnessed Equinox being born and eventually dying due to rapidly aging. This didn’t happen all at once, but it was a series of events that set off Equinox and made him just disappear. After the events of Zero Hour, Arion who told her that she isn’t of Atlantean origin greeted Power Girl and said that he commanded Power Girl’s mother to imprint memories of Atlantis and her being the daughter of Arion. 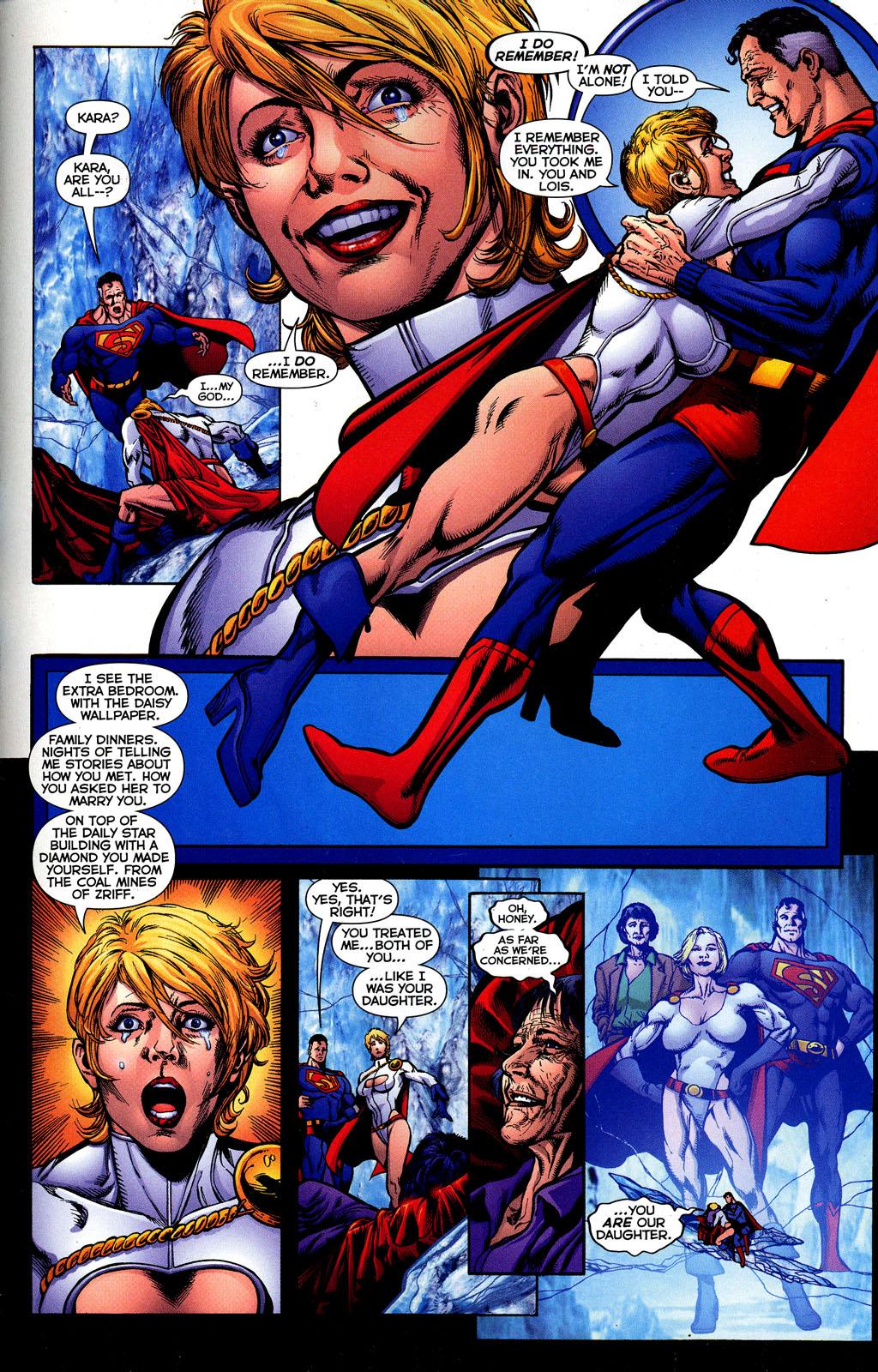 When another crisis breaks loose, Kal-L returns to the Earth created from Crisis on Infinite Earth’s, he accomplishes this by tearing down the paradise dimension that Alexander Luthor Jr. created. As of Crisis on Infinite Earth’s Kal-L, Lois Kent, and Superboy Prime had all been leaving in the paradise for over a decade? With post-Crisis Earth being the Earth created from the past crisis, Kal-L wanted to restore post-Crisis Earth with Earth-2. While his intensions were good, he ran into trouble with Superboy-Prime. Superboy-Prime and Alexander Luthor Jr. were trying to re-create all of the Earth’s that were destroyed in the past. Kal-L and Lois Kent made Power Girl remember that she was of Earth-2 and that she was treated like their daughter. Once Power Girl got her memories back, Superboy-Prime badly beat Power Girl and attached her to a tuning fork with Black Adam. Wanting to get Black Adam’s lightning to re-create the worlds, Alex Luthor tricks Black Adam into saying “SHAZAM” and the energy flows through Power Girl and creates Earth-2 again. Everyone from Earth-2 gets transported to the planet, except for Power Girl. Because of her proximity to the tuning fork, she stays on the newest, and last Earth, New-Earth. 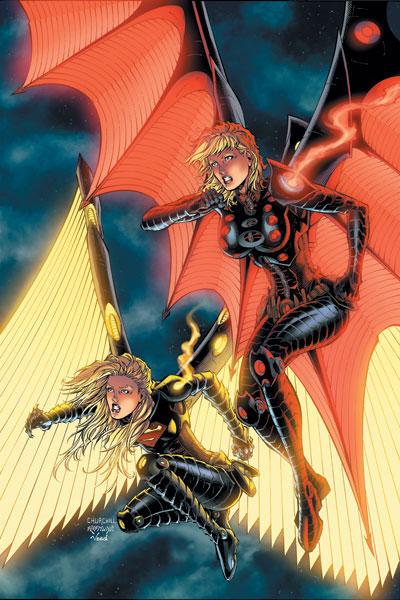 Needing to free the people of the bottle city of Kandor from Ultraman and Saturn Woman, Kara adopts the Nightwing persona. Ultraman is pretending to be Kal-El and tricks it’s people to giving him and Saturn Woman, control. Kara Zor-El a.k.a. Supergirl takes up the Flamebird mantle and the two female heroes take down Ultraman. When Power Girl gets captured, Supergirl battled mostly all of Ultraman’s loyal Kandorian soldiers and once Power Girl was saved, the two heroes leveled the playing field. When Kara Zor-El makes a choice to leave Kandor in the hands of Saturn Woman, Kara Zor-L (Power Girl) tells Supergirl that she left their people to suffer because of her selfish purposes.

What Makes Power Girl, the most go to girl of all.

Power Girl is one of the most heroic female characters that DC Comics has got. While most people care about “other” advantages of Power Girl, she is one of the coolest characters in the DCU. Her series is cool and comedic at times, while she always stands for truth and justice like her cousin. While being not as legendary as Wonder Woman, Power Girl deserves her own team not being the Justice Society of America-All Stars or the Justice League International. Power Girl has worked great on her own in her series, with frequent team ups from her fellow team members and others. Overall, Power Girl isn’t Superman, but something else. She’s Power Girl!

“Well, unfortunately for you, you’re not dealing with Superman… You’re dealing with me!” – Power Girl, maiden of justice.