Antihero is a protagonist of a drama, or narrative, who is notably lacking in heroic qualities. With lack of positive qualities such as: courage, physical prowess, fortitude and generally feel helpless in a world over which they have no control. All these qualities normally belonging to villains, misunderstood villains like Superboy-Prime.

As one of the many alternate Supermans, Prime resides on an Earth known as Earth Prime. Where DC only characters exists as fictional characters and nothing more. While Kal-El Prime was still a toddler, his scientist father made a grave discovery. Jor-El Prime learned that a massive solar flare from Krypton's red sun threatened to engulf their home world, ultimately destroying it. In a New England seacoast town, Jerry and Naomi Kent were hiking through the forests when they discovered the abandoned toddler. They decided to adopt him and raise him as their own. Naomi chose to name him Clark, despite the fact that Clark Kent was the name of a popular comic book hero known as Superman. Unlike his namesake however, Clark Kent grew up without the benefit of super-powers.

His classmates at school would tease him and refer to him as Superboy. However, Clark took the ribbing in stride and soon cultivated a small circle of friends. As Clark grew older, he became romantically involved with a fellow student named Laurie Lemmon. One evening, Clark, Laurie and several other friends decided to attend a costumed beach party. Being of good humor, Clark donned a Superboy costume similar to that worn by the fictional comic book hero. They drove down to Hampton Beach and sat by the ocean waiting to catch sight of Halley’s Comet. Suddenly, a tremendous tidal wave rose up on the beachhead threatening to flood the small hamlet. At that same moment, a cosmic vortex opened up above them discharging the Earth-One super-hero known as Superman. At that critical moment, a bizarre transformation took hold of Clark. The physical characteristics of his Kryptonian heritage manifested for the first time and he discovered that he was gifted with flight and super-strength. 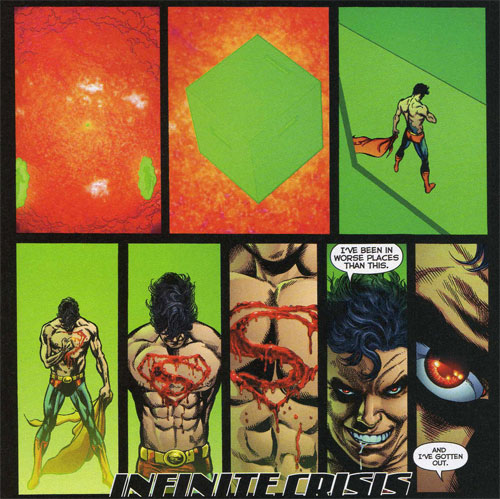 Superboy-Prime escaped from the pocket universe where they had been left at the end of Crisis on Infinite Earths. He trashes the JLA Watchtower, whoops Conner's ass and kills several heroes. It takes the combined efforts of the Flashes (Wally and Jay) and Kid Flash to pull Superboy-Prime into the Speed force. Bart Allen returns from the Speed force to share the news that the Speed force couldn't hold Superboy-Prime, who returns wearing Anti-Montor inspired armor that stores yellow sun radiation to empower him. In the middle of killing everything, he takes off to destroy Oa and collapse the universe and create a new one where he is the only hero. After killing 32 Green Lanterns, Kal-L and Kal-El fight and drag Superboy-Prime through the Krypton remains and its red sun causing his suit to be destroyed and leaving him powerless. The Green Lantern Corps then imprison Superboy-Prime inside a red Sun-Eater.

Superboy-Prime returns to his glory when the Sinsertro Corps attacks Oa. Dawning a variant of the power suit he wore during Infinite Crisis. Retuning to Earth as Superman-Prime he once again lets loose destruction on all that oppose him. Done with the Anti-Monitor's plans and Sinestos Corps he wants nothing but revenge for the destruction of Earth-Prime. He slaps around Ion, flies through the Anti-Monitor's chest and then throws down with the Green Lantern Corps and the Sinestro Corps. It takes the death of a Guardian to stop Prime, by displacing him into the multiverse as an Oan energy. 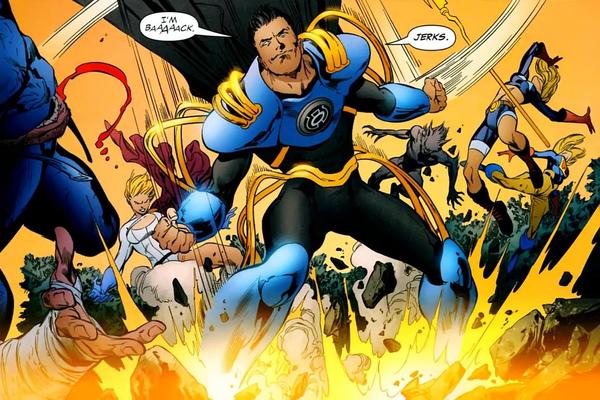 In Countdown we see Superman-Prime, as he is on his journey in a new Multiverse in hopes of discovering Earth Prime. Finding his way to Earth-15, he finds and kills Lex Luthor and that world's heroes blaming them all for his loss and ultimately destroying the planet. Back at The Source Wall where he had been beating the bad jokes out of Mister Mxyzptlk all for the hopes of helping him recreate Earth Prime. Magic seems to prove futile, so Prime finds Solomon on the Monitor's satellite headquarters. Solomon tells him that if he releases the Forrunners Earth 51 will be what he is searching for. The catch is there is a war going on between that Earth's heroes and the Monarch's army. Prime shows up, clocks in and stats beating ass. In the epic fight between Monarch and Prime, Earth 51 and its entire universe is destroyed.

The Time Trapper finds Superboy-Prime and uses him to destroy the Legion. So Prime is sent to the 31st century. Once there, he discoverers a museum dedicated to Superman and finds out he was nothing but a mere blip in Superman's life. Pissed at that fact, Prime wrecks the museum and finds out about a League of Super-Villains which consisted of Lightning Lord, Saturn Queen, and Cosmic King. So, Prime goes to the planet Takron-Galtos and starts a crew. Superman and Brainiac 5 deem Prime out of control and grab the Legion to do battle with Prime and his Super-Villains. During the fight everyone is brought to the end of time by the Time Trapper, an aged Superman Prime who is the sole survivor of all creation. Back on Earth Superboy clashes with Conner and Bart, who's back from the Speed Force. Conner scares Prime and Time Trapper receives the same scare. Saturn Girl figures out the connection between the two and uses the Time Trapper's time portals to recruit every Legion across the Multiverse, who fight and defeat the Time Trapper. Superman and friends transport The Time Trapper to the 31st where he bickers with himself as Superboy-Prime. The paradox created by Prime attacking himself returns him to Earth Prime. His family apparently was reading of his adventures in the comics and realizes what a big douche he was being. So now he spends his time on DCU message boards and collecting comics.

Prime, now living in his parent’s basement as Brainac 5, keeps an eye on him. Prime reads Adventure Comics #4 and learns of his possible death, he goes on a quest to find issue #5 to see how it ends. Alexander Luther shows up wearing a black ring and kicks Prime a Black ring. After Alex teases Prime about his impending doom and his weakness against Black Lanterns. Thinking that the DC writers have given him the shaft, he flies to New York and destroyers their offices. With all of Prime's emotions running rampant, he lashes out about becoming a mockery and never receiving a happy ending. Laurie, Prime's girlfriend shows up to tell him that “they” (DC writers) have heard him and everything is going to be all right.

The Only Real Superboy

The thing about Superboy-Prime is that he's more than just a spoiled brat. He has depth and it shows in his growing pains and in him being used as a tool by other manipulative characters. When at his core all he really wants is to just be happy. The real crime is that DC seems only to use him when they feel like it and then sweep him under the rug when they are done with him. Prime could be so much more. Get him out of Adventure Comics and give him his own honest book. Cancel Conners book and give it to Prime. He's more than worth it. 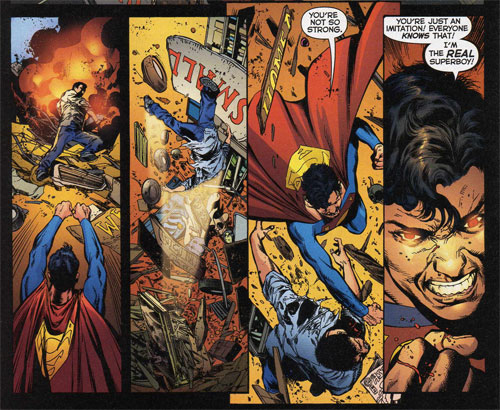