The team up of the next great DC Universe team ‘Black and Blue’ continues within the pages of DC Universe Presents #14. The last installment was a surprising reintroduction to the characters. Revitalizing Blue Devil and Black Lightning back into New 52 continuity it tinges upon humor, drama, suspense, and action. Though only touched upon them, as it was mostly just setting up. The pay off began here, in the second part of our story.

The idea of the team-up is rumored to have begun as a novelty, something silly and a play on words. Under writer Marc Andreyko, however, it can finally be showcased with the care and seriousness that the two characters deserve. Something that uses the premise of DC Universe Presents to the hilt. Andreyko paces the comedic moments out with the more dramatic ones as evenly as possible. Both strains are played to the best of their abilities, not steeping over eachother, but in synch.

There are no big one-off gags, but the simple, realistic humor that comes out through characterization. It is through this way that the more tender and slow moments can equally take the spy light and shine toward the surface. The drama takes forefront this time around though. Given the ending to last month’s installment, which featured the death of Blue Devil’s grandfather, this is something that is not easily passed through. The issue itself pays service to it and what it means for the characters involved, including Blue Devil who’s secrets are delved into. Humor is about, but most involves the villain of the piece – The Whale – who is interesting in his own right. 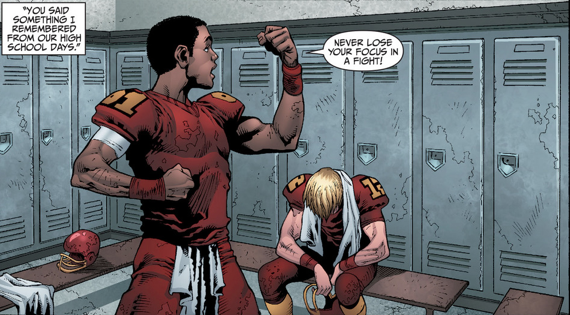 Black Lightning and Blue Devil, our leads, provide some more insight in this issue as well. The conceits of the buddy-cop characteristics are still there: the strait-lace and the rebel, but are expanded upon and given more depth. At heart these are just two people who have decided to answer the call to service in the way they know how. Their personalities are given reason and balanced out some bit by the experiences thrust upon them in this issue. They share mutual past but distinct futures.

The story continued to be refreshing without needlessly mashing in concepts for the sake of being “new”. While there were more dramatic and tender scenes this time around, the story didn’t lose sight of its premise. There’s still the air of being playful and somewhat tongue-in-cheek. That it doesn’t lose that feeling is in itself a breath of fresh air that is seldom seen in “Big Two” books. The concept is played around with, but in a respectful yet enjoyable manner.

Marc Andreyko has excelled in this reintroduction to two DC Comics mainstays. A worry is that the story has been cut short one issue, so while the start might be great, the landing might need some help landing. The art, by Robson Rocha, is on form and itself brings a nice tone to the book. Overall this is still on track to being an interesting new origin for these two and an entertaining romp throughout. Will the term “Black and Blue” in the future become as well-known as “Blue and Gold”? We’ll just have to wait and see.