"Attempts to give new life to its superhero universe."
By: Anthony Punt | Comic Reviews | May 27, 2016
In 1985, DC Comics published Crisis on Infinite Earths, a 12-issue series designed with two goals in mind: one, to resolve the myriad of continuity boondoggles that had developed over the years; and two, to revitalize its somewhat staid superheroes for a new generation. And for a time, it actually worked. Not only did DC offer a coherent, streamlined universe, it also made old standbys like Superman and Batman seem new again thanks to works like John Byrne’s Man of Steel and Frank Miller’s Batman: Year One.   Unfortunately, these valiant attempts to bring order to the DC Universe would soon be undone by subsequent writers and artists who recreated, and in many cases exacerbated, the problems that had previously plagued DC. Creators contradicted events from previous stories, as well as reintroduced characters and concepts seemingly excised in post-Crisis continuity. As a result, the DCU eventually became a bigger mess than ever before. In the three decades since Crisis, DC has continually tried to clean up its confusing and chaotic universe, with increasingly diminishing returns. 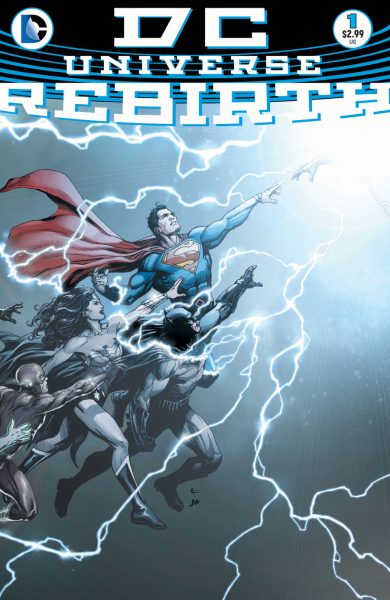 Written by longtime DC scribe Geoff Johns and illustrated by a panoply of talented artists, DC Universe: Rebirth #1 represents the umpteenth attempt to bring coherence to the DCU. Whether it succeeds on that front depends largely on your familiarity with recent DC continuity. A footnote on the first page instructs the audience to read two other comics before reading Rebirth. Being the rebel that I am, I forged ahead anyway despite not having read most of DC’s recent output, let alone the comics in question. My general familiarity with the DCU made it so that I had relatively few problems comprehending the events of the issue. Still, I can only imagine how the issue might read to the uninitiated, and that’s a large part of the problem with Rebirth. Given that the book’s title suggests an ideal jumping-on point for new readers, it seems like a lost opportunity to create a comic that exclusively targets audiences already immersed in the DCU. Rather, Rebirth reads less as a coherent story than a series of sneak previews to comics that DC hopes you’ll buy in the near future.   To be sure, there are elements to Rebirth that are sure to delight lapsed DC fans. In particular, the through line character in this issue is Wally West, who was formerly the Flash until he was supplanted by his predecessor and mentor, Barry Allen. Many fans, particularly Gen X fans who grew up with Wally as their Flash, were upset with DC’s decision to first reinstall Baby Boomer-era Barry in the role and then write Wally out of its continuity in an effort to “youthenize” Barry. However, Rebirth reveals that DC’s infamous de-aging of its characters wasn’t the result of an editorial fiat, but was actually part of a nefarious supervillain plot. As Wally intones during the issue, “As our time lines reformed, someone stole ten years from us. A decade was removed like a Jenga piece. I don’t know exactly how or why, but it changed everything.” This unusual meta-twist to continuity can only be read as Johns and DC implicitly agreeing with many of their fans who felt that the New 52 made a critical misstep in throwing the baby out with the bath water—with Rebirth, DC is furiously attempting to get both baby and bath water back in the tub as quickly as possible. 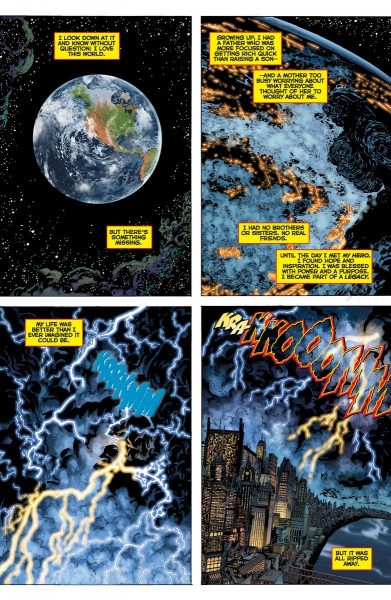 Indeed, the central conceit of Rebirth is that the DCU that’s been in place since the end of Flashpoint has all been a lie. Or more specifically, it’s all been orchestrated by a shadowy figure from DC’s illustrious comics past—more on that later—to tear apart the relationships between characters. We see this theme reinforced throughout the issue as Wally attempts to reconnect with old friends who’ve forgotten his existence. In the process, we revisit old friends such as Ryan Choi and Johnny Thunder (who is apparently the spryest centenarian ever). However, even these characters will seem unfamiliar to readers used to seeing them in their classic iterations. In particular, Ryan is more of a nebbish than the dashing, hotshot scientist first introduced by Gail Simone several years ago. Given how the character once defied hackneyed portrayals of Asian men, it’s especially disappointing that the Ryan sequence leans on lazy cultural stereotyping as a narrative device; at one point, the dean of the school where Ryan teaches threatens to deport him back to Hong Kong, which I imagine was intended to be humorous but instead comes across as awkward. Equally disappointing is the fact that, along with the Ted Kord-Jaime Reyes scene, it places a minority character audiences are used to seeing as the star of his own comic in a subservient role to an older white male character.   Another instance of Rebirth’s curious racial politics occurs when Wally meets his African American analogue, also named Wally West, who is retroactively revealed to be his long-lost cousin. Johns’ script does metaphorical gymnastics to justify the familial connection between the two Wallys and clearly wants the audience to view them as equals. However, it defeats this purpose by striking a strange compromise in which both characters exist separate yet equal from one another. Given that the white version of the character predates the black version, it results in a situation in which White Wally is implicitly designated as the legitimate bearer of that name and Black Wally as an also-ran (if you’ll pardon the pun). In light of this, it’s all the more troubling that Rebirth frames the New 52 DC as a broken, inferior version of the more optimistic and intrinsically superior pre-52 DCU. Surely the creators didn’t intend this, but it comes across as a narrative version of the “make America great again” rhetoric that imagines the ideal society to be a white suburban idyll. Invalidating years of continuity also comes across, intentionally or not, as disrespecting the tastes of readers who’ve enjoyed those comics and who are now being told that they are, and always were, crap. 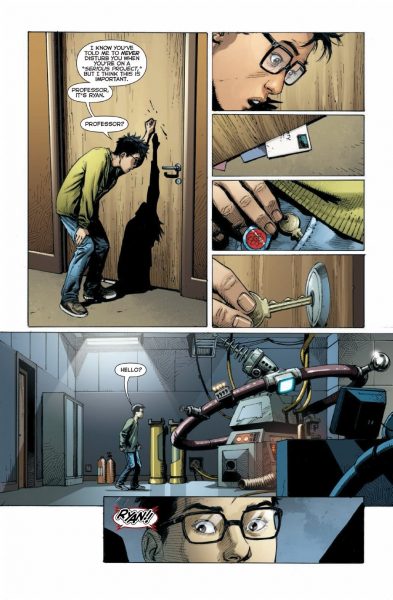 What makes Rebirth an especially frustrating experience is that reading doesn’t make the status quo of the DCU any clearer. As is his wont, Johns goes to great lengths to justify seemingly inconsequential details, such as how Wally got his powers, while failing to make clear to what extent relationships between characters have been altered. Rebirth seems to want it both ways by attracting both lapsed DC fans who yearn for the pre-52 DCU and regular DC readers who are familiar with such recent events as the mystery of the three Jokers and the apparent death of the New 52 Superman. As a result, it is unable to fully satisfy either audience. Also, what does it say that this violent course correction is being steered by Johns, a writer who was largely instrumental in developing the New 52 DCU that Rebirth is now slagging?   As to the identity of the mystery man pulling the strings behind the scenes, Rebirth strongly hints that it’s Dr. Manhattan, the naked blue demigod from Alan Moore and Dave Gibbons seminal Watchmen series. Purists will surely blanch at this quasi-reveal for corrupting Moore’s literary vision, and I wonder if introducing the Watchmen characters to the mainline DCU will end up diluting both. Why make Dr. Manhattan the leading antagonist of what will surely be another company-wide, lets-straighten-out-the-DCU crossover as opposed to, say, Darkseid? Well, for one Darkseid is dead, apparently, and for another we wouldn’t be talking about this comic nearly as much if this villainous plot was being orchestrated by one of the usual suspects. Of course, the entire point of Watchmen was its assiduously rooted realism (or at least as real as superhero comics can be). Watchmen was also the comic, along with Dark Knight Returns, that is held responsible for the era of grim ‘n’ gritty comics that Rebirth positions itself as explicitly rejecting. Therefore, it’s worth asking whether cross-pollinating the hermetically sealed Watchmen universe with the super powered pyrotechnics of the DCU is a worthwhile goal to pursue, let alone one that will reap creative success. 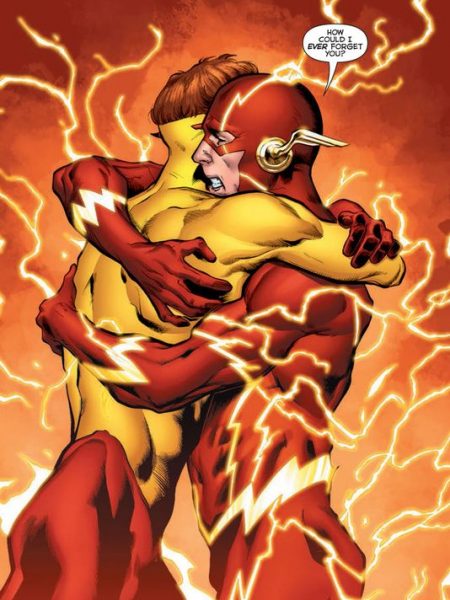 As demonstrated by the emotional reunion between Barry and Wally—easily the most heart-warming moment of Rebirth and beautifully drawn by Phil Jiminez—most fans are willing to forgive almost anything to see their favorites on the comics page once more. But with each rebirth, we run the risk of seeing an incarnation of the DCU that, even as it runs head first towards nostalgia, strays further and further away from what once made it such a fun place to visit. In Buddhism, we learn that the endless cycles of rebirth can only be stopped by insight and the extinguishing of desire. At what point will DC find enlightenment and finally end its samsara?
Rating
5.0
Pros