DC Comics’ latest What’s New in the New 52 has released its latest new character design, reintroducing Bronze Tiger with a far more literal take on the character. It sounds like he’s coming in the pages of Red Hood and the Outlaw as the leader of a team of mercenaries from Jason Todd’s past. 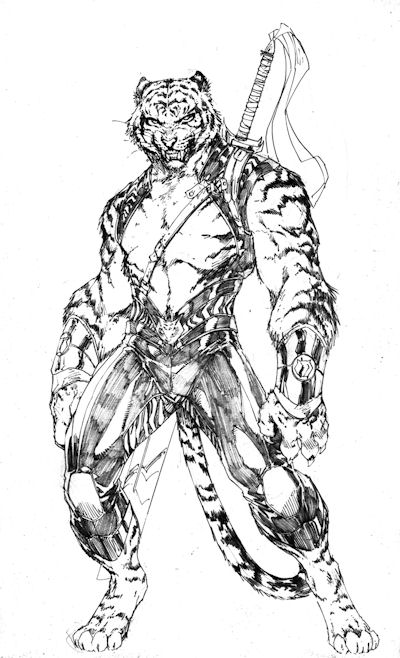 This one is likely to anger the fanbase. Granted, the Bronze Tiger fanbase isn’t a large one, but there are fans beyond it likely to care too. Bronze Tiger was formerly one of DC Comics’ semi-notable black characters, and he was notable for being one of the top martial arts fighters in the DC Universe up there with Batman, Lady Shiva, Connor Hawke and Richard Dragon. I can tell you just from this sketch that the latter is probably no longer the case in the New 52. You don’t get to be ranked as one of the best fighters if you’ve got powers helping you out physically. I would say being a weretiger qualifies. Hey, those are the rules. DC has effectively gotten rid of their top black fighter.

There’s also the minor controversy of DC turning one of their black characters, of which they seem to have few, into a weretiger. Yes, he is still black. But if he’s a weretiger full time, Bronze Tiger being black becomes more of a trivia fact than anything else. I say this is a minor controversy because to some people this matters and others it doesn’t. I can see both points of view on that. But given how poorly DC is going with minority characters as the New 52 goes on, this probably isn’t the wisest decision.