De Blob 1 was an interesting game upon its Wii only release. It was a very pretty, colorful game with very little depth or substance, and the sales numbers showed that. De Blob developers Blue Tongue Entertainment have decided to expand their colorful game onto the Xbox 360 and PS3 with the latest installment de Blob 2 in hopes of better sales numbers. Will this risk pay off? I don't know the answer to that question but I know what the answer should be.

You start off de Blob 2 as de Blob (obviously) and you realize that Comrade Black has once again grayed up some cities. Story is by no means an integral part to the de Blob experience. It’s mostly just a means to deliver cute little cutscenes that usually involve a blob getting hurt. While it isn't that important in the bigger picture, it still is fun to watch the well animated cutscene play out. After all the towns are colored gray, you must embark on your journey to suck up color and paint the town by flopping your body onto various items spread throughout the world..

One of the more impressive aspects of de Blob 2 is its music. You make music by turning your blob into a certain color and flopping yourself onto something. Each color has its own separate little musical instrument associated with it which oddly gives the colors themselves a little bit of character. Take for example my favorite color to use in the game, purple. Every time you paint a building, tree, etc., you get to hear the soft sound of a woman’s voice as she hums out some musical notes. 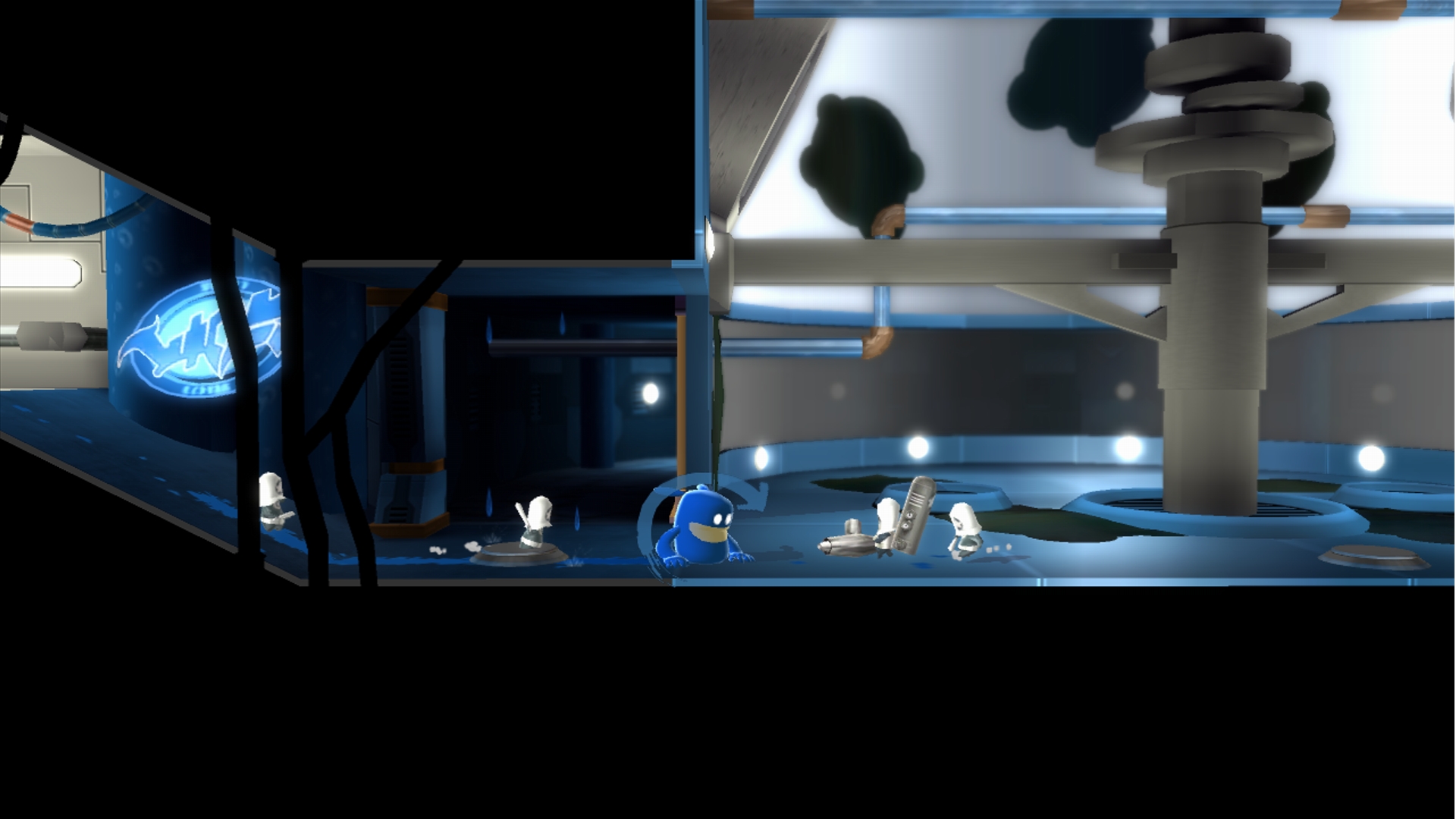 Unlike in de Blob 1, de Blob 2 has 2-D platforming sequences where you go underground and do objectives such as “hit this switch” or the always popular “hit this switch.” That’s not a typo; it seems the absolute only thing you do in these sequences is hit switches. It’s obviously broken up by some puzzles but the puzzles are never fun to figure out and are mostly cracked within 10 seconds. On top of that, de Blob isn’t made for tight, cramped spaces. The character is at his best (control wise) when he is able to roam freely and isn’t forced to roll in two predetermined directions.

Since de Blob is all about color, you’d expect it to look good, which it definitely does. The visuals are at times absolutely breathtaking. The colors all look visually pleasing and the design on the environments are all varied and different from level to level. Near the end, it does get a little tiring seeing the same colors over and over again but once you take an hour long break from the game and jump back in, your eyes will melt at how beautiful and smooth de Blob 2 looks. When playing in multiplayer, the game can take a few frame rate dives but never enough to make you think de Blob doesn't look like a beautiful, delicious cake.

Multiplayer is another new thing they’ve added into de Blob 2, and like 2-D platforming, it’s very uninspired and poorly implemented. De Blob 2’s co-op is by far the worst of the multiplayer options, in it your multiplayer buddy takes control of Pinky, de Blob’s partner in crime. And by takes control, I mean has a little dot on the screen and shoot colors. As you can guess, this is not fun for the co-op pal. While playing with a buddy of mine, he literally got so bored of it that he put the controller down and starting looking at his phone until I actually needed him to do something.

The other mode in the multiplayer is called “blob party.” Where you and your friend take control of two separate blobs and compete to win challenges, netting you points, and ultimately either winning or losing at the end of the game. That’s what we in the gaming industry call competitive multiplayer. This mode isn’t as bad as the co-op but it is still barren when it comes to depth. The fact of the matter is, nothing in the multiplayer is terrible, but nothing is particularly interesting either. 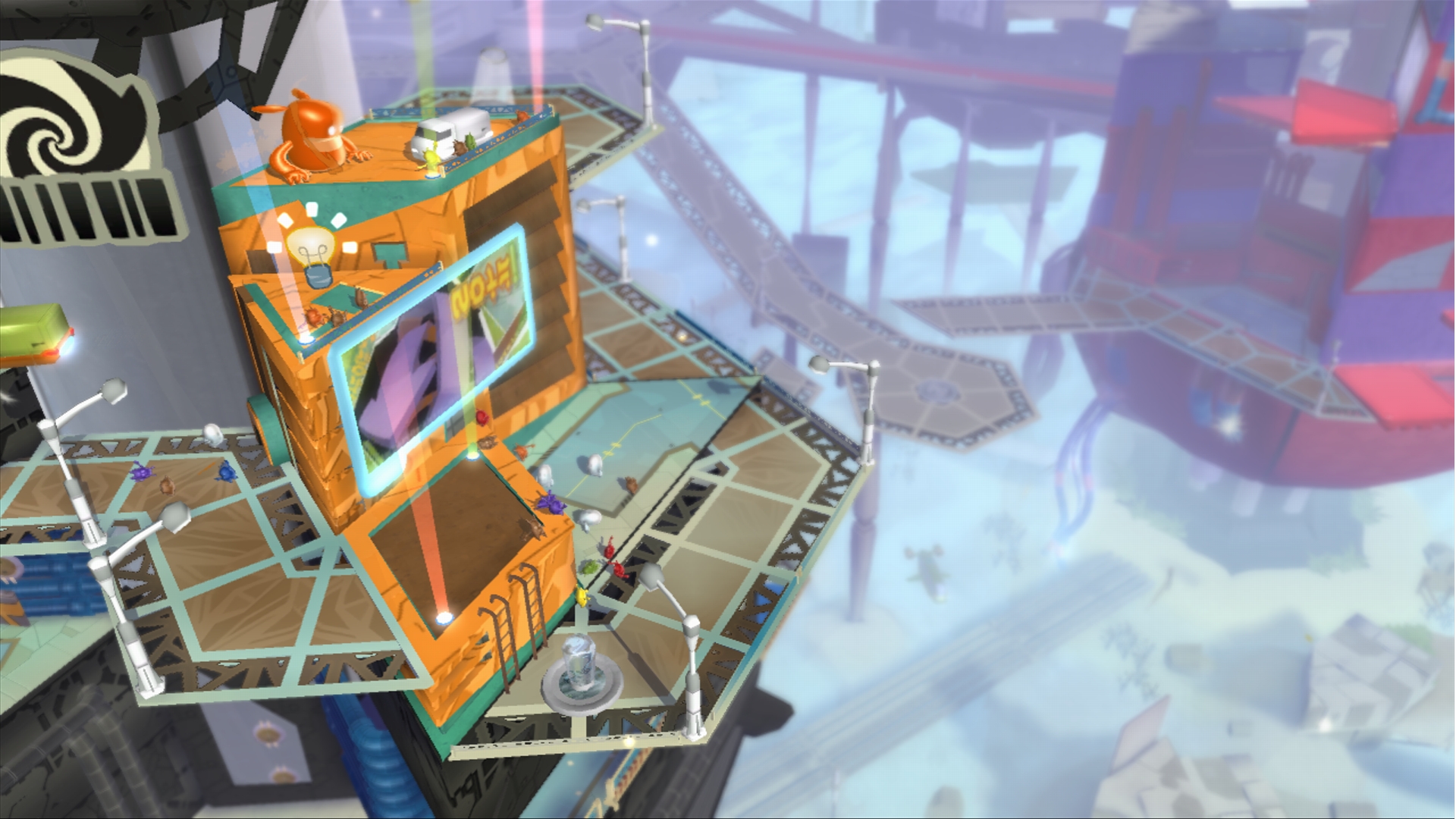 Where de Blob 2 falls the hardest though is its gameplay. At the beginning stages of de Blob, it seems like all good fun. Rolling around, painting towns beautiful colors while listening to soft, sweet music. But once the game decides to start throwing platforming and puzzles at you, it falls apart. The controls make de Blob near impossible to control once you are doing the more serious platforming sections, such as having to jump a far distance or doing a wall run. De Blob's movement isn't precise enough to do these sections, he rolls awkwardly in small areas and on top of that, the camaera will freak out on you and not know if it should be to the side of you or behind you. You can attempt to control the camera with your right stick but it's as if the camera isn't listening to you and wants to do its own thing.

Your main move in de Blob will be the jump and smash attacks where you can jump and smash any enemy, (most) crates, or any colors that are close to you. This action can make the game move really fast but the issue with this is that you’ll want to be constantly smashing your way through sections, which when there are a variety of things around, that could be a problem. Take for example if you need to become orange to solve a puzzle, you'd have to jump into red and then into yellow. But most of the time colorbots (one of the things you can obtain color from) will be very close to one another, which can lead you to smashing into the blue colorbot instead of a yellow or red colorbot and then you'd have to start the whole process over again. The thing that drives the knife even deeper into the wound is the arbitrary time limit which you compete against throughout every level. It's the 21st century, in no game should you be bogged down by a pointless time limit.

De Blob 2 is not offensively horrible in any way, it’s really beautiful and pretty fun in the opening hours of the game. But once it tries to do more than just take advantage of its fun, simple concept, it becomes a frustrating mess. Which leads me to believe that this color symphony may need to be put to rest.