By: | Movie Features | April 15, 2011
In 1996, Wes Craven (creator of A Nightmare On Elm Street, which spawned an entire series of slasher films) created an entirely new scary movie franchise. This franchise turned the slasher genre on its head while following the formula that slasher films and sequels have followed since their creation. It threw new ingredients and different elements in this already successful horror sub-genre.

Now that Craven has returned with Scream 4 on Friday after more than ten years away from Sidney and the Ghost Face killer, nothing would be more fitting than the venture back to the previous "Scream" films and the highs and lows of the series. 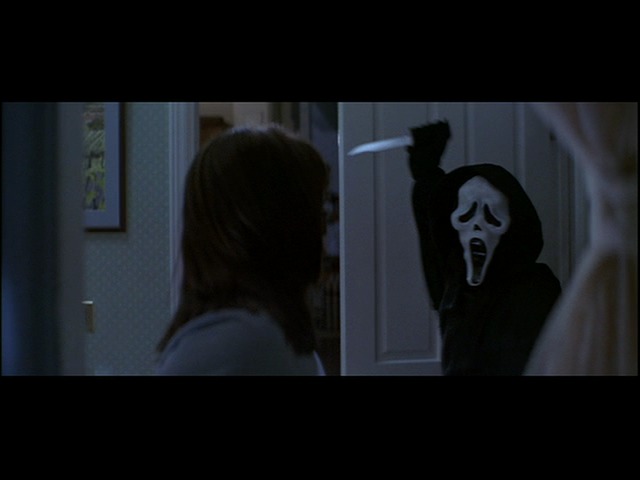 A costumed killer is terrorizing and slashing his way through high school students in a small town. Before actually doing the deed and slicing them up, he makes phone calls to them where he toys with them and asks them trivia questions about scary movies. If they answer wrong, they die. Sidney (Neve Campbell) is the real main character here, although this is a film with a lot of fantastic and well-written characters (the reporter Gale, horror film freak Randy, and of course Deputy Dewey stand out strongly). Sidney finds herself to be the main target of this masked killer and if she doesn’t figure out who it is soon enough, it could mean the death of her and all those she holds dear.
Wes Craven (a man who’s movies range drastically in quality, see My Soul to Take for a bad example and A Nightmare on Elm Street for a good example) directs this movie with skill and knows exactly what kind of movie he is creating here. Kevin Williamson’s script is where the movie really shines though; there are so many hilarious moments as well as solid scares throughout this entire film. One moment in particular, Randy is watching Halloween on the TV (during the moment where Michael Myers is coming up behind Jamie Lee Curtis) and the killer is sneaking up behind him in the background while Randy is yelling at the television “He’s right behind you. Just look behind you!” Brilliant stuff.

A quality cast of young (at the time) little-known actors caps off everything. Neve Campbell, David Arquette, Courtney Cox, Matthew Lillard, Jamie Kennedy, Rose McGowan, Drew Barrymore (who despite top billing dies within the first 10 minutes), and many more actors and actresses stand out. This cast is amazing together and makes you feel for these already well-written characters.

If I can find a flaw with this film, it’s that it does run a tad too long in the end: nearly two hours. This can be said for all of the "Scream" movies seeing as they actually have a complex story going on while delivering scares, kills, and good slasher stuff all around.
“There’s a formula to it, a very simple formula,” says horror freak Randy in this movie. It’s true there is a formula to slasher films and while this movie follows that formula, it also turns it on its head many times while simultaneously throwing in twists and turns. This is an instant classic of the horror genre and one of the last great slasher movies. Highly recommended for horror freaks and non-horror fans alike! 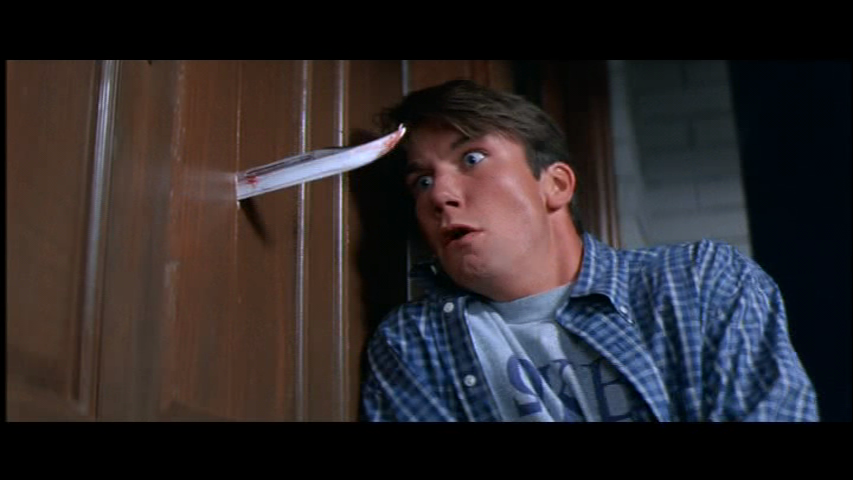 Sidney (Neve Campbell) has moved on since the massacre of most of her friends and fellow high school students. She is going to college, has made new friends, and even has a really cool boyfriend. When a movie inspired by the murders from the first film comes out (titled "Stab"), Sidney is harassed by prank phone calls but doesn’t mind and takes it fairly well — that is until another killer begins knocking people off left and right on the campus. This killer could be anyone; it’s up to Sidney to discover this psycho’s identity before he finishes acting out his real-life sequel.
Scream 2 is everything that fans loved about the original. It still has that satirical sense of humor, it still has some awesome scares, and a great cast, good directing, etc. It’s all still here. Although it is not a perfect movie (another long run time and Jamie King’s character still grates on my nerves), it is definitely a great one and a good sequel to one of the best slasher films of our time.
Williamson's writing is really good, but it doesn’t seem to have exactly the same impact that the original had. The dialogue about sequels seems a little forced and too silly. The reveal of who the killer is was done really well and I honestly didn’t guess it. Something also should be said for Liev Schreiber’s performance. He plays a much bigger role than he did in the original both as an actor and a character — he makes us suspicious, wary, but also emotionally invested in him.
Scream 2 is almost as awesome as the original film. It doesn’t quite have the same impact or staying power, but it is a fun ride getting to the conclusion. It suffers from the sequel syndrome, but it also nearly measures up to the high bar set by the original film. The "Scream" movies aren’t your average slasher flicks. They lack amazing or creative kills, but make up for that with stories and well-developed characters. In the end, that’s what really makes a perfect horror film: stories and characters. 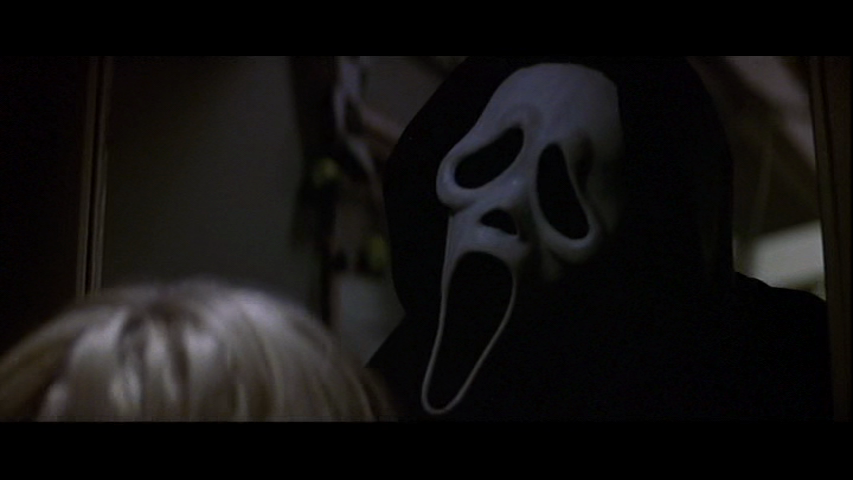 The third installment follows Sidney, Dewey, and Gale as they discover that a new killer is completing a "trilogy" of serial killers. He wants to make a grand finale to Sidney's life which to this point has been filled with deceased friends and psychopathic killers. This time the film is set in Hollywood which involves lots of cameos and in-jokes (some of which grow tedious really quick ... Jay and Silent Bob showing up ...really?), but it also brings this series to somewhere unfamiliar and new.


This film is filled with some awesome, clever, and memorable chase scenes and suspenseful moments as well. One involves an exploding house (pictured above) and one follows a poor victim through a hall of one-way glass. This movie is a blast of fun, but it is not without it’s flaws. I mentioned before the in-jokes and cameos. Also, Sidney does not take front stage here and is mostly just a background character, which doesn’t make any sense because she's the main character of the series.
The twist here determines whether you will dig this movie or not. Some people absolutely hate the reveal of the killer in this film. I did not, I thought it got a little far-fetched, but it still had me surprised and entertained. This is the lesser of the first three movies, but it still remains better than most modern slashers and it elevates the series a little more by giving it story and well-written characters, as do the other two entries, and keeping us on our toes through the entire running time.
Although I may get a lot of hate for saying this, I personally dig Scream 3 a lot. I find it to be another awesome modern slasher and a great entry in a series that (so far) has no big flaws. Really good stuff! If you are a fan of the previous two, then definitely give this one a look. 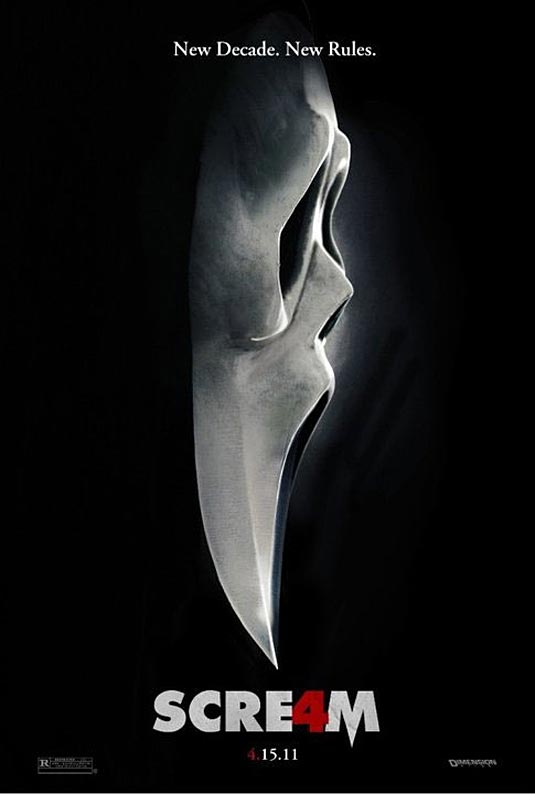 This one has many fans drooling at the mouth. Although Wes Craven's last good film was Scream 3, maybe returning to the well will guarantee a quality horror film. It also is worth noting that Kevin Williamson (who wrote the first two installments) has returned to script this one. Here's hoping we get something special with this film, which looks to pass the franchise on to a younger generation. Will it be the last or just the beginning of a new trilogy?