By: | PC Features | March 11, 2011
The internet has been abuzz with talk of the trailer for Dead Island, which showed up a month ago.  While that was a spectacular piece of filmmaking, it didn't actually show any footage of the game.  Since then a few screenshots and snips of concept art have slowly rolled out.  This week a new batch appeared which will give us a better idea of just what we'll be doing on this island of death. 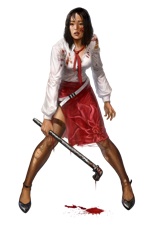 First, we do know that it will have multiplayer with co-op.  Xian Mei, one of the four playable characters has been showing up in much of the promotional material.  Xian Mei is a staff member at a resort hotel on the island, and she's quite photogenic, especially when wielding a lead pipe dripping with zombie blood.

As indicated by Xian's improvised club, the game focuses on melee combat and lets players pick up everyday items to fight off the undead hordes.  The other playable characters are named Logan, Sam B, and Purna, but they haven't been getting as much notice because, well... they don't fight monsters in high heels and stockings.

We also know that players will have the opportunity to create custom weapons by combining items in a system which might be reminiscent of the process used by the Dead Rising games; note in the image below that one of the characters is using an electrified machete! 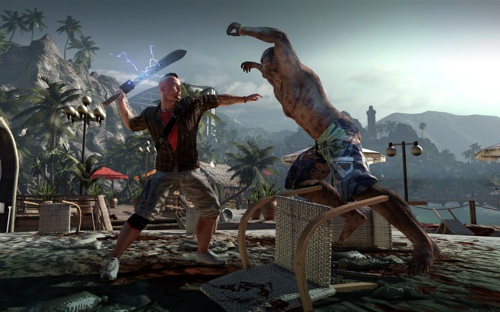 Of course, no zombie game is complete with out the traditional Zombie Repellant; or a "Shotgun" as it's sometimes called.  Firearms have been confirmed in gameplay, but the focus will still be on hand-to-hand.  There is a stamina system which limits just how much time players can spend chopping away with their weapons before needing to take a rest. 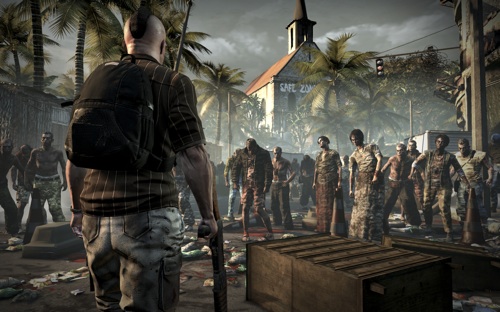 And along the lines of hand-to-hand combat, there will be some normal weapons (It's not all about the electric machetes), and we can see below Xian Mei wielding an axe as she faces off against a boss-type zombie.  These "Special Class" enemies combined with the co-op give it the ring of Left 4 Dead, as does the sign reading "Safe Zone" that you might notice in the screenshot above. 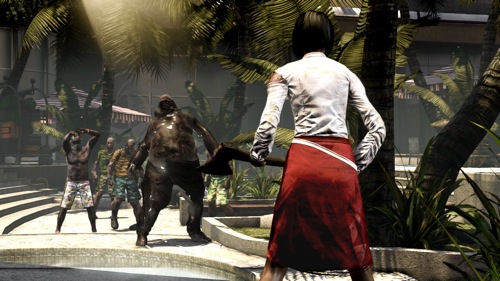 Also in the recently released screenshots, is a picture of Xian Mei fighting a zombie while she sits in a car.  It's unknown if this is from a cutscene, or if players will be able to actually drive vehicles, but adding drivable vehicles to shooters and survival horror has become commonplace of late, so it's perfectly plausible that players will have the opportunity to drive around in Dead Island. 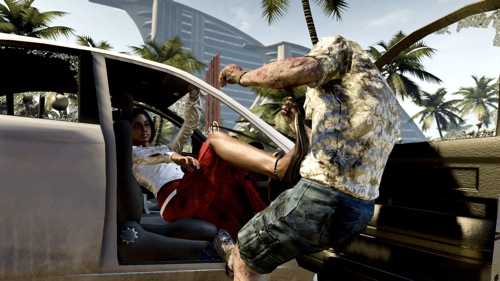 The game is being published by Deep Silver who've brought us some good games, like S.T.A.L.K.E.R. Clear Sky, but have also been behind many mediocre games as well.  Developer Techland also has an unremarkable track record, and is best known for the Call of Juarez franchise.   When analyzing what info we have on the game, it comes across as Left 4 Dead meets Dead Rising, which isn't a bad combination at all, and Dead Island seems like it has the potential to be a nice addition to the admittedly glutted genre of zombie apocalypse survival horror.

You can see that nifty trailer HERE.