By: Justin Moody | Uncategorized | January 1, 1970
Dead Space was made with fans of films like Event Horizon or Alien in mind. Not since Resident Evil 4, Silent Hill 2, or Siren have I played a game that was true terror.  As the main character Isaac you go through 12 levels of insanity trying to save yourself your crew-mates and your girlfriend from the creatures known as necromancers. The graphics in the game along with the sound and game-play are all top-notch. Every time I played this it had to be on a bright Sunday afternoon. The game is that creepy!!!

Now  the first game is more like chapter 4 in whats become a 5 part storyline so far. Dead Space has an animated film (which does not look nearly as good as the game, but looks like a decent enough prequel), a comic, and a Wii rail shooter. These all take place before the Original 2008 for the 360 and PS3. What exact order well that's really up to the viewer. The very first moments of the Wii game and the Comic are the beginning then the movie and the rest of the events all seem to mesh together.  All 6 issues of the first comic are also on the Wii game. Image put out all the comics. The artwork is done by Ben Templesmith the artist and co-creator of 30 Days of Night. So its safe to assume he knows something about Horror.  The Wii game is really for the die hard fans but at the same time I never want to hear someone say there are no good M rated games on the Wii that's Bull Shit. 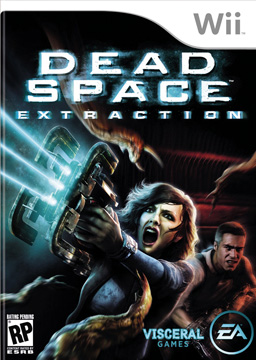 Now the 5th installment of Dead Space 2 wont be out till 2011. We got our first look in last months' Game Informer and the new X-box mag. The player takes control of Isaac and battles with the Necromancers again. Image announced a tie-in comic again and maybe another anime film hopefully. So far early screen shots look good.

At Pax East, the East coast video game conference in Boston, MA,  They had a great Dead Space panel from EA. They showed us one min of new DS footage, and they had someone come out in the New Isaac costume. The power point presentation was awesome.  It touched on a lot of things you may have missed from the games, movies and comics.  It’s just a shame we have to wait this long till it comes out. In the mean time you have 2 other games and a movie and 7 comics to read (there was a DS E-comic also).  But go check out Aliens and Event Horizon for an original Horror movie in space story, you'll see where the origins of this game came from.