Plenty of details have been revealed regarding the latest of Visceral Games and EA's survival horror franchise, Dead Space 3. If you don't know the story by now, you play as engineer Isaac Clarke, who has been subject to plenty of deep space terror over the past two games. This tme around, you get some help in the form of a new partner, John Carver, who deals with his own mental demons over the course of the game. 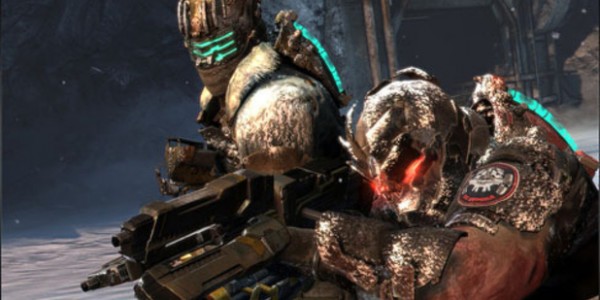 Fans of the previous solo adventures of Isaac Clarke will be pleased to know that Dead Space 3 has just as many jump scary and long, dark hallways to keep you on your toes. The inclusion of Carver "was something we took very seriously. We did not want to just tack on a soldier who was just Isaac’s sidekick, or who was one dimensional. He needed to have his own unique back-story, which you’ll learn more about throughout the game, and through our new graphic novel," said Steve Papoutsis, vice president of Visceral Games.

Carver has been scarred by the Marker, making co-op a little more interesting. Carver will have his own mental breakdowns and imagine various things from his previous life, his wife and kids, for example and that will sometimes cause him to freak out. The twist is that your partner controlling Isaac won't be able to see what you're seeing as Carver; an ill-timed mental breakdown around a group of Necromporphs will leave your partner scarmbling to save you and make sure he stays alive. Carver is on the same level of paranoia as Isaac, which adds more tension to an already tense game.

The story is also far longer than Dead Space 2, so expect Carver and Isaac to both get fleshed out more. Visceral Games is answer some of the questions from the previous games. Story producer Chuck Beaver explains, "The story arc in Dead Space 3 is Isaac finding all of that out. I can't give you answers because it'll spoil it. Spoilers in Dead Space 3 are all those questions. What are the markers doing? Where do they come from? What's their purpose? Where do the Necromorphs come from? What is going on is what we answer here. There are a few big twists to get there, but we answer as much of that as we possibly can, without leaving nothing to the imagination. Huge chunks of lore are explained in Dead Space 3."

Co-op looks to add a new dimension to the already three-dimensional survival horror franchise. Only time will tell if it succeeds. Dead Space 3 hits shelves February 8, 2012 for Xbox 360, PS3 and PC.