"Upgrades, depth, explosions and *yawn* whatever."
By: Dean Holden | PS4 Reviews | April 10, 2016
Dead Star, one of the PlayStation Plus free games for April, is a game about upgrades. And space. Yeah, upgrades and space, pretty much those two things. Armature Studio's Dead Star can best be described as a cross between a twin-stick shooter and a MOBA. You go 5-on-5 or 10-on-10, take outposts, shoot enemy ships, and you have a victorious team after about 5-15 minutes of cool-looking space lasers, missiles, and explosions. [caption id="" align="alignnone" width="1024"] 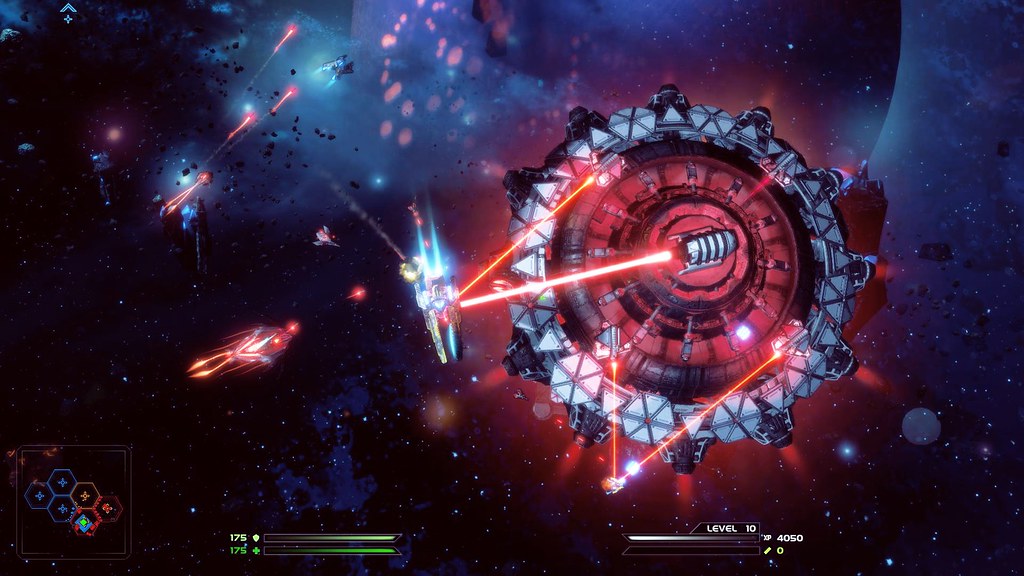 Also worth noting: Dead Star looks pretty good, too.[/caption] At its core, Dead Star is a fairly accessible top-down twin-stick shooter, in which you fly around a simple map looking for enemies to shoot, outposts to take over (after shooting them a bunch), and resources to collect (also after shooting them a bunch). You also upgrade things. Constantly and relentlessly. As you bring resources to your team's base, you level it up and upgrade its defenses. That, plus basically any other action you take earns you XP, which you can use to level up your own ship's abilities for the rest of the round. Then after the round is over, you earn components ("drops," or "loot," if you will) which can in turn be used to upgrade your ship(s) permanently. That's basically the whole game. There are technically two game modes, but there's essentially only one. We'll get into that later. First, let's talk about Conquest mode. Conquest mode is a "capture the points" game mode with two win conditions: either push the other team back so far as to capture the enemy's home base, or hold onto a majority of points and upgrade them enough to win on points over time. In my experience, the latter win condition is the more common one, as games tend to get bogged down while both sides build impenetrable defenses. To try breaking these deadlocks, you have different classes to choose from. There are only nine ships to choose from, three variations each of a speedy scout ship, a massive assault frigate, and a mid-size scavenger that excels at upgrading outposts and providing defense. The ships are fairly well-balanced, especially between the classes. And while nine ships doesn't seem like very many, they each come equipped with four completely unique abilities, which makes the sense of balance even more impressive. Some of the weapons are simple gun and missile weapons, some are lasers. Other ship abilities include time bombs, healing beams attack fields, shields, cloaking devices, and EMP fields. To name a few. [caption id="" align="alignnone" width="800"] Lots of weapon types often means lots of chaos.[/caption] Obviously, there's a variety of playstyles, and none of them appear overpowered. Better still, each player can take three different ships into each match as their "loadout." So if a situation arises where a player needs to, say, switch to a larger ship to have enough firepower to take down a heavily-fortified base, they don't have to worry about being stuck with a scout ship's low attack and defense power. The game does a decent job of telling you what situation to use what type of ship in, but it generally doesn't matter because this isn't a game you can play effectively just freelancing on your own - and unfortunately, that's mostly what happens. Executing any sort of strategy in this game requires extensive communication. Even the weakest of outposts left undefended can be difficult to take over independently. It's clear the foundation of the game is built for efficient team play, where all the different ship types are supporting each other. So that's great, if you have a team of five or ten people that you want to practice strategies with for dozens of hours at a time. [caption id="" align="alignnone" width="626"] 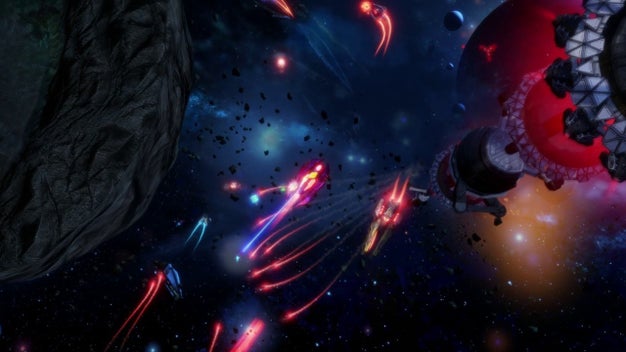 Okay, first we send in the scouts to disrupt their defensive line. Then we drop the EMP field to disrupt their defenses and FIRE ZE MISSILE![/caption] But if you're just looking to jump online and play a few rounds, Dead Star is probably going to wear on you quick. Despite an effective tutorial and accessible controls, the learning curve is very steep, especially when it comes to strategy. The result is that most matches devolve into a race to take and upgrade bases quickly in the early game, and then sit back on defense as both teams fail to make any further progress. It's hard to say if Dead Star is very defensively-based, or if offense just requires a level of coordination it isn't getting. That would be fine, normally - online multiplayer is always a tough thing to get into. But it is particularly harmful to Dead Star because there simply isn't enough content here. Remember how I said there were two game modes, but really there was only one? Well, the one game mode is Conquest. The other is called "Escape Run." Escape Run is a really interesting-sounding mode where you have to escort a hijacked ship as it performs lightspeed warps through other players' games. Unfortunately, I didn't play it and neither has anyone else I've seen. You see, to play Escape Run, you have to trigger a rare drop. And after 60+ matches, I never got that drop. So that game mode is just sort of... locked, I guess. It looks incredibly cool, but I don't know. Maybe I never will. As for the rest of it, it's... pretty good, I guess. The ships control smoothly, and there is a realistic-feeling difference between the way a small, agile ship handles compared to a big frigate. The twin-stick controls make sense and even the gun turrets have some weight to them on the bigger ships. So the mechanics are certainly solid But there isn't anything special here, and the problem is that there are both better twin-stick shooters and better MOBAs. Once you've played a couple rounds, there isn't anything new to see. It's just repetitive, with ship upgrades being pretty much the only thing that changes over time. If you're a PS Plus subscriber, there's no reason to NOT play the game. It isn't busted, and it does some interesting things. There is a fair amount of depth for those willing to put the time in. I'm just not sure Dead Star has enough going for it to justify that kind of time commitment. There's no endgame, no story - a backstory, sure, but nothing substantive to keep you wanting to play. You could make the argument that the same is true of Rocket League, but there's a difference - Rocket League is undeniably very fun at every skill level. So what we have in Dead Star is a game that, while built well, is hostile to newcomers and unrewarding to veterans. Somewhere in the middle, you might have a little fun. Maybe.
Rating
6.5
Pros