Get this! You are browsing in your local comic shop, and it just happens that your weekly quota of comics felt a little short this week. Tired of the same superhero crap out there and your wallet doesn't have enough green to buy every comic from that big event involving a Scarlet Speedster? How about a one-shot? Well, this week Image Comics could hold the answer to your needs with Deadlands: The Devil's Six Gun.

The story is set in the 1800s and is about a genius inventor named Copernicus Blackburne, who is assigned to build a gun that can kill the devil. Motivated by his curiosity and arrogance he accepts the job, but things get out of hand quickly and a tale of obsession turns rapidly into one of vengeance. 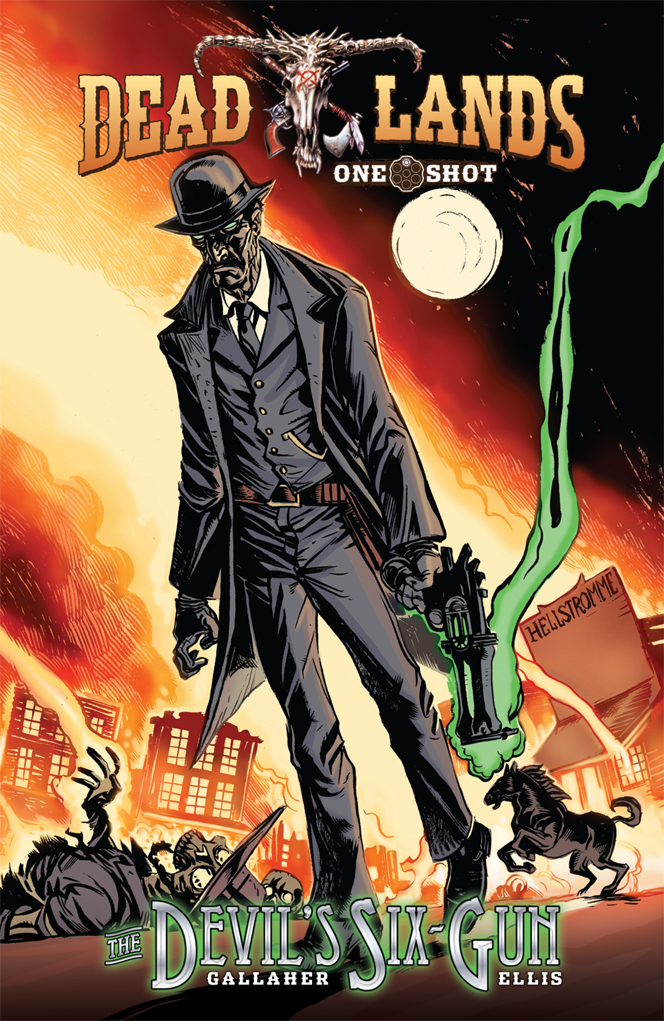 From the Harvey Award winning team of High Noon, David Gallaher and Steve Ellis are responsible for this introductory tale of the Wild West based on the RPG game of the same name from Pinnacle. Another interesting little nugget of information on this series is that it's edited by fan favorite writer Ron Marz. Deadlands will be a series of books done by a rotating creative team of top creators.

By the looks of it, this series could be worth your money. C'mon – top creators? In a Western setting? It's about time this genre gets a decent comeback. You know back in the day a Western was as easy to find as your local Red Box. Movies, radio, TV, comics and whatever medium that could tell a story, a Western could be found with ease. But nowadays you're lucky to catch a good Western, especially in comics.

The good folks of Gallaher and Ellis are making sure this series delivers classic Western action with a modern touch. The story has a mix between EC horror, classic sci-fi meets the Wild West, but focusing more on the EC horror. The series is not gore and violence, but rather more about telling a creepy tale about obsession. If you had the Crypt Keeper introduce this tale, it would work perfectly for a Tales from the Crypt episode since the narrative is spot on classic EC horror.

Although a self contained story, this one-shot works as an introductory tale for a future story with other characters. The writing tries to capture the mood of the times but sometimes feels like it's trying too hard. The story has great characterization yet falls under the pits of traditional clichés as the tale and characters will give your brain a direct dose of déjà vu. This is a classic Faustian-like story that although borrows heavily from its source, it does manage to entertain the readers and keep things fresh. Think of this one-shot as a folklore tale that serves as a stepping stone to the upcoming books. The story successfully manages to introduce this universe as an excellent setting for rich, fully developed characters.

The art captures the period well and manages to throw in a rich background giving readers the chance to explore the surroundings this world has to offer. The emotions are not well presented (unlike previous works from Ellis) as the character sometimes feels flat, especially in times where he needs to show some emotion, but that could be overlooked since the story is done from the perspective of Copernicus who happens to be emotionally cold. The art might not look too attractive and the pace can go too fast at times, but it does portray a rich vast world and doesn't focus only on the main character like many artists do.

The book is a nice change of pace to the saturated superhero market. It is not a "must have," but if you have the extra money and you're tired of the same superhero slugfest, give this book a try. Hey, not only can you get a nice Faustian-like tale, you can get a good short backstory featuring Billy the Kid. That's more bang for your buck. It's an enjoyable read for everybody and is only $2.99 for 27 pages, and I know some comics for that price that only give you 15 pages of art and ten of ads. Plus Westerns are cool – "Nuff said."

Overall Score - 7.0/10
*Good: A solid book overall, does have a fan base and they will definitely enjoy.  It's a Western mixed with horror – do I need to say more?*