By: | Comic Reviews | October 24, 2011
Oh yeah, bringing Marvel back. And who better to do it than that over-used B-lister I can't help but love and some of you probably can't help but hate: Deadpool! The merc with a mouth is back, as if he ever left, in a new series that continues from the previous Deadpool Max run. Now, since this is a series under the "Max" label, keep in mind that the book earns that "Explicit Content" warning. Deadpool Max 2 #1 wants very much for your fragile sensibilities to ask, "Oh dear, did they really just go there?" The answer is unequivocally, "Yes. Yes they did." So, if you can put up with that and you can put up with Deadpool, then come on along.

One thing I really appreciated about this book is that, since it is the first issue of this run, it assumes that you have not read the previous series. I did not, so for myself and anyone who missed them as well, Yay. However, if you did read the previous Deadpool Max series, then I expect you'll get bored fairly quickly. Deadpool takes time out of the book - and not just on an intro page - to explain the context set up by earlier stories and, while informative for newcomers, it becomes obtrusive. I assume that this was only done for the sake of this first issue and that later books in the series will not share this potential flaw, but I can really only see it being a problem if Deadpool's brand of blatant exposition becomes a habit. 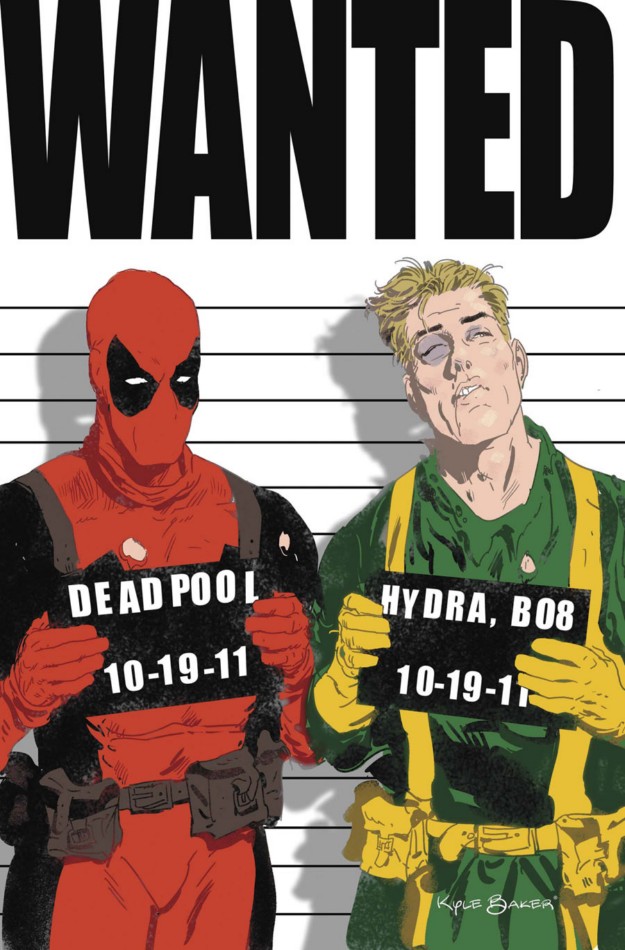 Anyways, the story thus far is that there was a big terrorist attack that killed some people and it was orchestrated by the sinister Hydra organization. Due to reasons that are not entirely relevant, Deadpool's reformed chum, Hydra Bob, is blamed as the mastermind for the attack and the quest to clear Bob's name is on. Basically, Deadpool and Bob are squatting in a crappy motel, trying to find out any info on Hydra, and doing a terrible job of it. When Hydra attacks a high-scale church, the incident is greatly televised and our heroes finally get a less than subtle lead. The actual mastermind behind the attack, a female dominatrixy Taskmaster (because we need reverse-gender versions of every character now) is present at the attack and the guys need her to clear Bob's name. Also, the priest there has a monkey. Deadpool really likes monkeys.

If you're looking for an epic tale of heroism and redemption, you'd best look elsewhere. If the first issue is any indication, any story that writer David Lapham gives in Deadpool Max 2 will be a vehicle to set up characters and situations with which to display the odd couple of Deadpool and Bob. Well, that's not entirely fair to say. There is also a lot of time spent towards seeing how much of that "Explicit Content" the authors can get away with. A great deal of this issue is spent on the priest of the church, either extorting money from his patrons, getting a boner looking at Taskmaster, or weeping for his life. Fans of Christianity, you are poorly represented here. Sometimes the "maturity" is used in clever ways, specifically when the dialogue of a porn tape in the next room fits surprisingly well with Deadpool and Bob beating up a single Hydra janitor, but I think the freedom given by the rating could be put to much better use. For his part, Deadpool is entertaining, but less quippy than portrayed elsewhere. Most of his external dialogue just has him shouting random phrases like, "Save the monkey, save the world," and "Remember the Alamo!" Bob is very much the straight man to his buddy, which I can always appreciate. Between Deadpool, Bob, the priest, and Taskmaster, you have every speaking part for the issue and it really does play out like a skit with an ensemble cast.

Before wrapping this up, I really have to mention the art by Kyle Baker. I honestly don't know what to call this style of art, but it definitely stands out from what I've been seeing in other superhero books lately. I've heard it compared to MAD magazine and I can definitely some of that style present. Characters look very cartoony, but a lot of the shading adds a realistic depth and dimension, while some of the backgrounds look like photos. Deadpool's bright red costume appears even more vibrant against the mostly muted tones in the rest of the book, making Deadpool jump out of the page more than he normally does. Juxtaposing Deadpool's bright red against the faded green of the Hydras and the dull browns of the church really makes him pop and adds another layer to the idea that he is always the wildest guy in the room.

There are a lot of complaints one can level at Deadpool Max 2 #1, but I honestly enjoyed it overall. The mature humor is mostly juvenile, but that doesn't mean it's not enjoyable. I appreciated that the book clued me in to what was happening, but the exposition really does halt the book at parts. The same can be said for the priest who, while probably funny in small doses, needs to realize that we're here for Deadpool and at a certain point Lapham is just beating up on the clergy. Deadpool's old buddy Cable will be around in the next issue, which may get the story moving along, but even if it doesn't, will probably provide some laughs, so I'll look forward to that. The book is clearly not for everyone, but if you're looking to catch up with Deadpool, then this is a decent place to start.
Rating
6.5