Reviews for comics like Deathstroke #0 are often the hardest to write – well, the hardest to make enjoyable. Because that is exactly what Deathstroke #0 is not. It is a long and boring story that could have had many alternatives and does have some heart put into it. Unfortunately, not enough to make me like it. Sorry Robert Liefeld – I still think you're the misfortunate scapegoat of the 90s, and I see you have passion, but your final run on this book is not working for me.

In his zero issue, we see Slade Wilson's early life in the military through the narrative eyes (and unfortunately captions) of his overseeing officer and wife Adeline. We then see his transformation into Deathstroke the Terminator, a merciless contract killer putting the lives of his sons and wife at risk.

So, if you couldn't tell by the "unfortunately" bit, I did not like the narration from Slade's wife. It could have worked better than it did if the comic did not rely on it so heavily. There was very little if any dialogue throughout the issue's pages, leaving a lot of space open to Adeline, and she takes full advantage with caption upon caption of gabbing. Almost as worse than her yammering on, her narration spoils the end of the issue... This is even sadder considering an in-story shock (that wasn't even supposed to be much of a shock according to the writing) involving Peabody and Wintergreen was much more interesting. Of course, it's glanced over almost immediately because it's just thrown into the issue for no reason, adding absolutely nothing to the story. 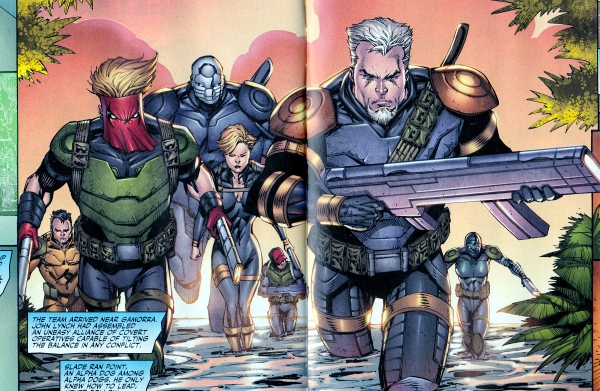 That story, so "wonderfully" dictated to us by Adeline, is bland. I can give it points since it's one of the "truest" zero issues I've seen, giving us a full origin story. But there's an inherit problem with having an origin story in a single issue: it feels cramped in that little 20-something-page space. The reader is given Slade's life from a sixteen-year-old to the old relic he is now. That's about a fifty year span, if not more. There are whole series that don't have a timeline that long. Team 7 is mentioned, but not nearly in enough detail to care. Every member introduced, and everyone of them with the exception of Slade only appears in two panels. So, along with the inherently shot pacing, it's hard to feel anything about the story since it feels more like a biopic you would see on the history channel and not an action-packed and provocative Deathstroke story that we've been missing for quite some time.

Artist Robert Liefeld and inker Adelso Corona make some small attempts to bring creativity into the artwork of Deathstroke and fails those attempts. Some of his ideas were admirable, like trying to make two pages of artwork symmetrical to one another. Unfortunately, the effort was thwarted by the fact that his dimensions on both pages were too different from one another to appear symmetrical. In another two page spread there is way too much going on in the page, so much so that it is almost impossible to follow the narrative captions. And even when you do figure out the order, some things appear fragmented or seem to be missing a few introductory words.

The rest of the artwork is very bland with sketchy figures and the always terrible quirk of eyes being over shaded to the point where it looks like no one has eye sockets. Most panels also look like rehashes of older ones, with people standing around looking very stiff and backgrounds with little to no background to them, usually just a bland single color or no color at all. These are all terrible glitches that I've been seeing in Liefeld and Corona's artwork since the beginning of their run on Deathstroke, and these harkened tropes from the 90s need to die. The only "perk" I can say is offered by the art is an early page that pays homage to an old issue of Deathstroke.

This issue serves it's purpose as an origin story, but it's so drawn-out that it becomes a bore to read – with the help of Adeline's grading narration, which still would have been tolerable in smaller doses. But my major question after this is will this story have a conclusion? Or, more importantly, should it? It ends on a cliffhanger, and as a zero issue it could be continued in issue 13, but Liefeld has already announced he will be leaving the Deathstroke series. Will the new writer continue this story? The ending sets up a very similar concept that we've had before in the Deathstroke New 52 series by pretty much recreating Grant using another character who, according to a very upset fan on Tumblr, has always been a kind soul who's meaning is completely warped in this issue. So... pitching this idea's conclusion into the oblivion won't be much of a waste. As is, this issue was too drawn out with an overdose of narration ironically mimicked by the original Deathstroke #0 from the 90s , which was just as long and overwrought as this final Deathstroke story from Robert Liefeld. Wait – Liefeld's going to continue writing Deathstroke until #15? 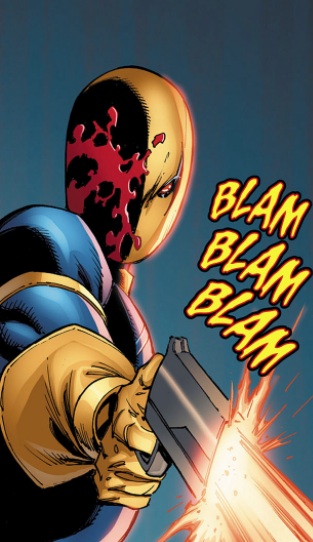