This is a mediocre issue. It's not as bad as Liefeld's run on Deathstroke and it's not as good as Higgins run (well, some of his run). But I have to say, it surpassed the first part of the arc in most aspects. Unfortunately, you're not going to care or remember this issue the day after reading it.

Professional mercenary Slade Wilson, better known as Deathstroke, continues his mission to kill the "unkillable" man Koschei. With the help of a mysterious new ally by the name of Elena and the rest of the town, Slade has a plan to kill Koschei... if it's possible. 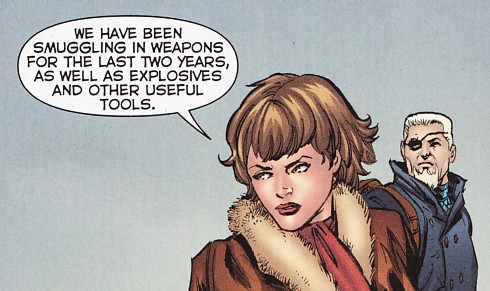 I'll give this to Jordan: unlike Liefeld, this story only lasted two issues. Jordan could have stretched it out into more issues... and ironically he probably should have let this story go one more issue thanks to his characterization of Elena – or lack thereof. Elena is the only townsperson given a name and is their "inspirational" voice. But, when Slade senses there is something secretive about her, we don't get a follow-up to that thought. We just get a C.I.A. bunker. Koschei, our villain, is also never fleshed out, and we never do find out why he became so specifically "unkillable." The two issues crutch also made the pacing in this issue feel fast, which is noticeable considering the last issue had better pacing. But why am I bothering suggesting another issue? I'm just glad this story is over with. Ironic considering I can compliment it.

Like I mentioned last time, the story is a variation of a story arc that has already been used by Liefeld in this same series. However, with this issue we see more "variation" than the same exact storyline which the last issue couldn't do. The ending was creative, though it might be a disappointment for people who are looking to see Deathstroke in a huge duel with Koschei. The part the town's people play in Koschei's death is creative and different from the rest of the series where just Slade is the main focus. Now, he's working with the townspeople and Elena, seemingly off-panel swallowing his pride. But none of the townspeople are fleshed out, except for Jordan's half-attempt at fleshing out Elena and then forgetting about it. Slade, who ironically isn't the main focus, manages to steal the show with some great thinking and personality. 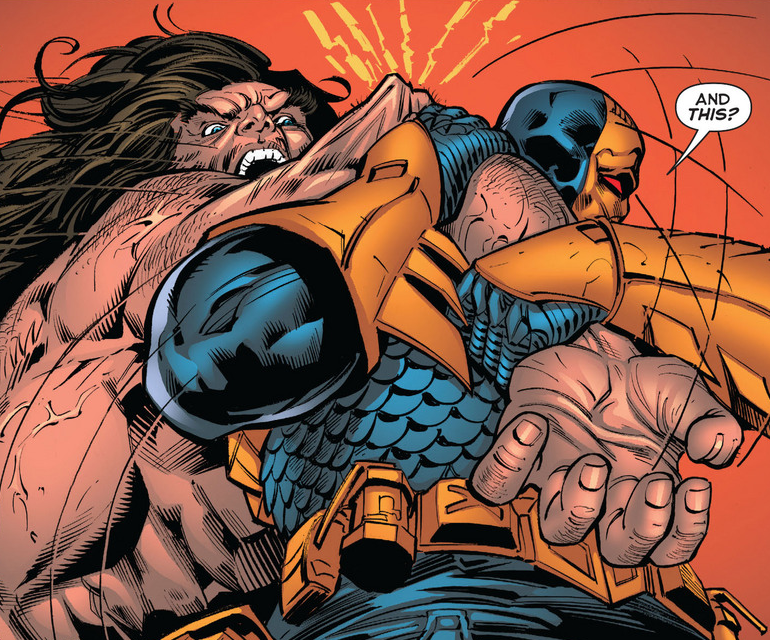 Unfortunately the psychedelic cover which could have resulted in some very interesting to talk about visuals isn't mirrored in the interior of the artwork. Penciler Edgar Salzar and inker Scott Hanna return alone from the last issue and draw some mediocre characters that aren't nearly as able to make fun of as other Deathstroke artwork has been. The one downgrade from last issue is there are few good backdrops. Most are simplified to basic shapes, a shame considering the last issue had some great star-filled sky backgrounds of Sarvenia. Some backgrounds are simply speedline and solid colored. A few of these even make encore appearances in the very same issue making the artwork feel repetitive at times.

I couldn't decide if writing a review of Deathstroke #16 was worth my time (I definitely know it wasn't worth over 1,000 words like the last issue was). But what better way to ingrain into the two people out there who are still reading this series that, while this issue isn't terrible, it's not worth your money. It has no impact on the reader or the character. Maybe if you want to see a decent attempt at a town rising up to take back their home you can read this, but I'm sure that concept has been done before, and better than just decently. Jordan may have tried to rise the sinking ship this series became, but considering it's already being cancelled as of issue 19, who cares? I know I don't.

...which is why I wrote an entire review about it.

Eh, I didn't need that time or those brain cells anyway. 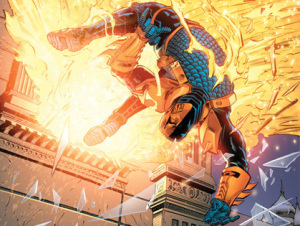