Deathstroke takes on the ninja Tomo once again, but this time Tomo is stronger and faster. Will Deathstroke be able to outmaneuver him or will his enhanced strength and speed prove to be too much for our artificially enhanced mercenary?

Writer Justin Jordan continues to make Deathstroke an entertaining character to read. His narration, however, rarely talks about strategic battle plans like it did in the last issue. This change has both positives and negatives. The strategic planning added an intellect to the book, but by taking it out completely all of the tedious nature the narration had is gone. Now, we're left with some witty inner-monologue that could be said in dialogue boxes. So while the narration has flourished, the dialogue has almost completely ceased. 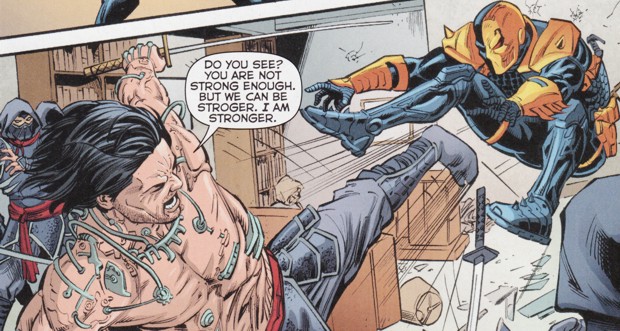 The plot is a regurgitation of the last issue with minor changes. Deathstroke isn't fighting hundreds of ninjas anymore. He's mostly fighting Tomo, who we know has some superior strength that he gained with the help of some venom (must have been cellmates with Bane at some point). I still feel that ninjas have well worn-out their "cool" phase. In fact, Tomo becomes even less unique when he's juiced up on venom. If you want to see someone on venom, go read Batman: The Dark Knight (and they have the benefit of being established Batman villains and not just some dishonorable ninja).

Jordan, just like Deathstroke, really takes advantage of his locations. The main entertaining battle doesn't take place on a train like in the last issue, but instead takes place on the side of a building. There's a unique battle atmosphere even more interesting than the last. The other fight inside the building somewhat pales in comparison. But again, just like last time, the story feels like two big battles with no exposition in between. This can be off-putting for readers who want a story-driven series (but, then again, you wouldn't be reading Deathstroke if you wanted story-driven). You get what you'd expect from this story: action.

The one thing you don't expect is the lackluster ending. It ties in with a character from Team 7, a separate series which Deathstroke was a member of that was cancelled by DC in May. This will leave readers who didn't read Team 7 (like me) feeling like they were cheated out of an interested ending.

The artwork has only a slightly different team than last time and it isn't noticeable. Edgar Salzar is still the penciler but now Jason Gorder has joined Scott Hanna as inker and as a replacement for Derek Fridolfs. Characters have a lot of lines, like Deathstroke's costume and Tomo's torso, which has so many lines it looks like his stomach went into a blender in some panels. The fighting panels aren't drawn badly but the backgrounds are rarely given much attention. A lot of them are reduced to bland colors and speedlines. No panels or pages are really memorable either because of beautiful artwork or terrible artwork.

Just like before, this issue isn't bad. You get what you would expect if you've been reading this title for a while and it's still an improvement from when Rob Liefeld (and sometimes Kyle Higgins) were writing the series. But the readers of this issue should be from a very select group – a group who has at least read and enjoyed Deathstroke #17 (and Team 7 if they want to appreciate the ending). Everyone else... there are plenty of other comics in the sea that offer more originality than this one does.