This is one of the better issues of Deathstroke that has some depth and characterization pertinent to the plot. Unfortunately the artwork is still filled with awkwardly designed musclemen and blood-gushing soldiers with only some good partial two-paged spreads.

We learn more about Deathstroke's son, Grant, who continues failing to impress his father. Readers also get some "family time" with the Wilsons before returning to real time, which features Legacy and Deathstroke's huge battle.

The issue has a compilation of flashbacks which could have been spaced apart in past issues. The opening scene with Grant has very quick action. Usually, I would complain about this quick, pointless action scene with countless deaths and blood and no strategy other than guerilla warfare. But that is an accurate portrayal of Grant's fighting style, which Slade complains about in the very scene. All the flashbacks, while losing some of their impacts because of the previous issues, hold-up well when looking at this issue alone. 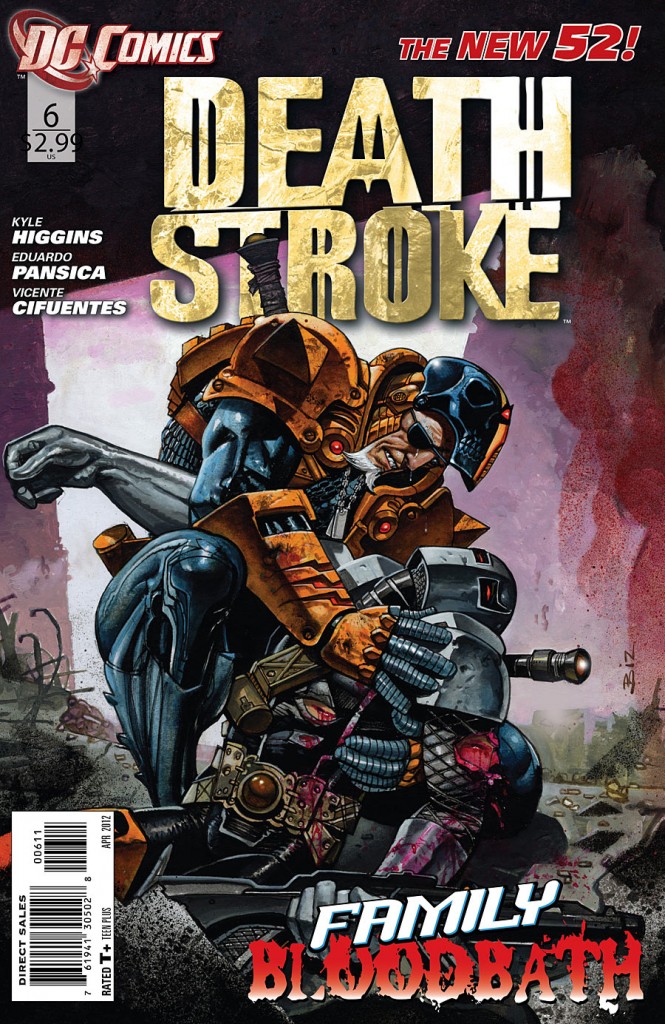 Then Grant's mother comes in to tell him to talk to his father. The conversation between those two introduces his mother, something I was wanting to do, but it fails to characterize her at all and instead pushes towards the characterization gleamed from Grant and Slade's relationship. Hopefully his mother will not be scathed over in future issues.

Grant's death scene is surprisingly short, only spanning a page. It does give readers enough information, but it would have had more of an impact if previous issues had done a better job building Grant's character. The moments with Grant in this issue are fairly detailed and his relationship with his father Deathstroke continues to be a rough one that is portrayed well and is not as clichéd as you'd think it was. However...

Because of the first three issues insistence to not move the plot forward but instead spam action scenes, there is not a lot of sympathy or back-story on Grant's character until this issue (and a slight touch from the last). There could have been a lot more build-up to Grant's death, which was still a powerful moment in this issue, but it would have been a greater moment with more background on Grant.

The action scene with Slade and Legacy uses some strategy rather than the macho-fest fighting scene from the previous issue between the two. This strategy helped it from feeling like the same tireless ring-around we were getting before. The strategy even made sense, but it was tedious to see Legacy gloat over and over about what he thought Slade was doing, which readers could tell almost immediately wasn't the case based on Slade's actions. Namely his lack of sweating the situation.

The new finisher, Eduardo Pansica, has hurt artist Joe Bennett's work, which was not spectacular in this series to begin with. Slade's character design still looks like an android, but is a necessary precaution against his enemies. The design used to be awkward, but ongoing readers are used to it. What they are not used to is Grant's costume, which follows a similar formula. It is another clunky design.

Ironically, their roles switch when out of costume. In flashback, Slade looks bad out of costume, with terribly wispy hair that makes him look old and non-threatening. Grant, on the other hand, is drawn devilishly handsome. But, in current day, Slade is back to looking badass with his eye-patch. The rest of the art is solid with no real problems except the humorous attempt at expressions on characters faces. The worst attempt is made on the mother who is hiding in the shadows. She is drawn overly shocked by a surprise revelation to the point where she looks insane.

This is another good issue of Deathstroke with some powerful moments, but it is undermined because of how long Deathstroke took getting to this point. The art is still mostly a miss and the story covers a lot quickly, but the characters are enjoyable and the story is satisfying, with a cliffhanger that will have you coming back to see an upcoming fight between Deathstroke and a not-so-newcomer. 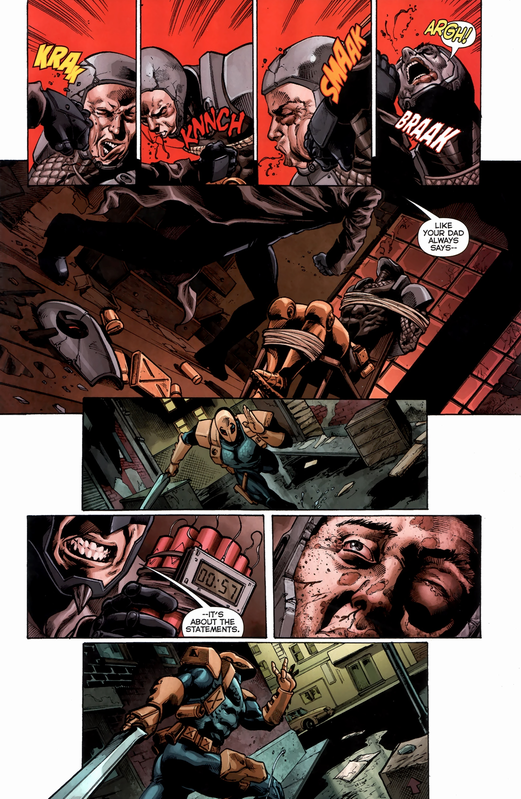