By: Edward Oliveira | Wii-U News | December 18, 2013
Today’s Nintendo Direct focused not just on 2014 titles, but also some surprises that have 2013 release dates. We also see shocking new game announcements and game mashups galore!
The most shocking of the announcements happened right away when Iwata debuted a new collaboration between Nintendo and Tecmo Koei. The last time these two companies made a new title, we got Pokémon Conquest, which frankly was awesome. This time?
Dynasty Warriors X Zelda. Yup.

Tentatively titled Hyrule Warriors, what we see here is the hack-n-slash gameplay in Dynasty Warriors/Samurai Warriors/Warriors Orochi in the Zelda universe. It is NOT the next in-house Zelda game, this is instead done by Koei's Omega Force. It’s unknown when/if this game is in the Zelda timeline since we see Skyward Sword’s Bokoblins mixed with Ocarina of Time’s Dodongos and Lizalfos. The Link here does not seem familiar either, but he is sporting a very fashionable scarf, which signals what team he’s on. If you’re unsure of how any of these games work, Tecmo Koei released Warriors Orochi 3 for Wii U at launch and now it’s only $19.99, so check it out! As a fan of many Warriors titles and Zelda, you can label me excited.
Next up was Kirby Triple Deluxe, which looks similar to many other 2D Kirby games. One new feature we see is the layered levels, which we have seen in other games like Mutant Mudds and Donkey Kong Country Returns. The exciting new unveil here are the secondary games within it: Kirby Fighters and Dedede’s Drum Dash. Kirby Fighters is pretty much an all-Kirby Super Smash Bros., but with a life bar and the fighters are Kirbys with different copy abilities. Dedede’s game is a rhythm-based game where the pesky king jumps on drums on the beat to Kirby music. Nintendo has given Kirby Triple Deluxe the vague release window of 2014. 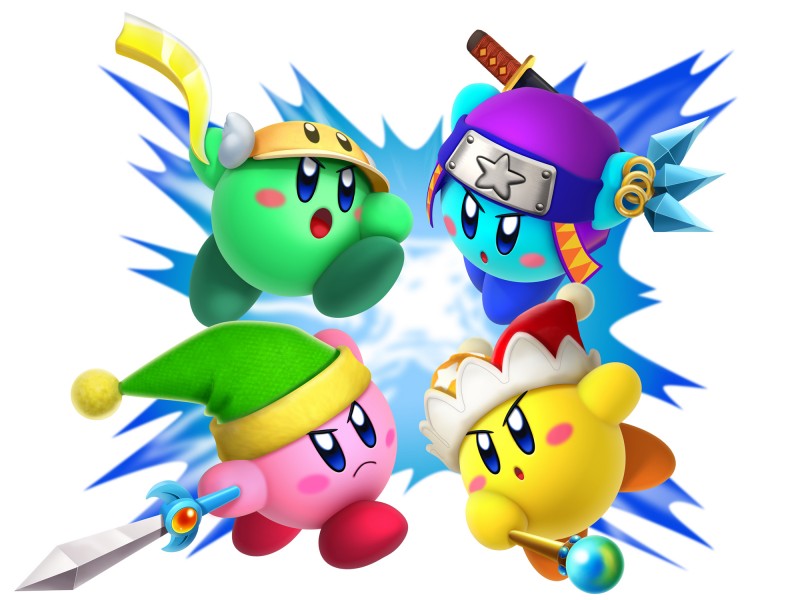 Next up was Yoshi’s New Island, which still looks like another Yoshi’s Island. Granted we haven’t had one since 2005, but the only difference here is that Yoshi can obtain giant eggs and use them to wreck everything in your path.
Next is a return of a cult classic for the Nintendo 3DS eShop, Chibi Robo! Photo Finder. This formally Japanese-exclusive game has Chibi Robo helping an artist get a museum up and running, and nothing does museums better than junk. The game will have you hunt down everyday items and take pictures of them with the 3DS’ 3D camera, but these items need to be snapped at the correct angle based on your items’ desired silhouette. The game along with its demo will launch January 9th.

Next week on the 27th, the Pokémon Bank and Transporter app will come out for all Pokémon X and Y owners. The bank will allow cloud storage for up to 3,000 Pokémon and the Transfer app will allow Pokémon from Black/White 1 and 2 to get transferred into X and Y, allowing the unlock of the full National Pokédex. The apps will have a free 30-day trial for those who download it before the end of January and anyone who access it between launch and September 14th will get a free Celebi.
In the last Nintendo Direct, they announced that Bravely Default would get a limited edition. This month, we get more details on the Sleep Points and announcement of a demo. Sleep Points (SP) allow you to freeze time during battle, preventing enemies from attacking or defending. These points can do other abilities like swap equipment, heal, revive or do extra damage. Well, we now learn that SP will have a max of 3 points and it takes eight hours of 3DS sleep mode to regenerate 1 of those points. Let’s say you don’t want to wait eight hours, because Nintendo has a shortcut to that: Microtransactions! For a fee you can max out your SP if you’d like. Reggie was explicit that this was optional and does not mean anything if you choose not to. 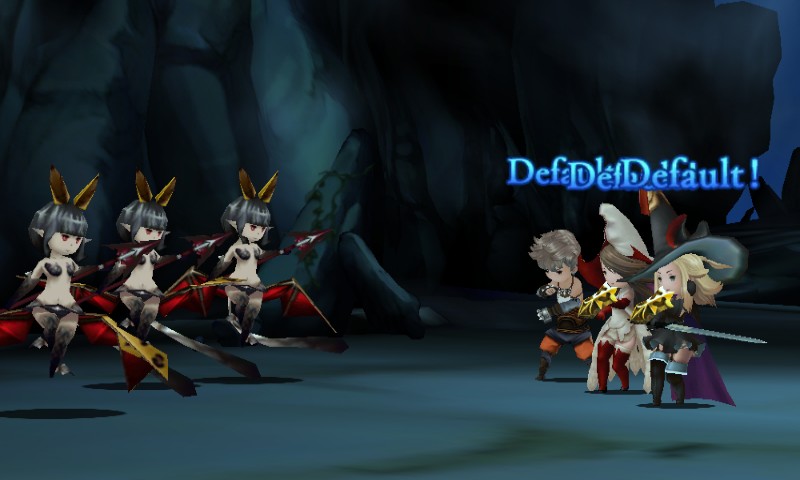 The second bit of news was Bravely Default’s demo. This demo is unlike any other because it’s actually a side story exclusive to the demo, meaning that it is inaccessible in the full game. The demo revolves around the cast revitalizing a village, but the demo also has the ability to StreetPass and your Friends List as well as the ability to gain items for the full game. The demo launches on January 2nd and the full game launches on February 7th.
The next big Wii U game is Retro Studios’ Donkey Kong Country Tropical Freeze, which we find more info of. During the Spike VGX awards earlier in the month, we learned that Cranky Kong was partner character that will assist DK along with Diddy and Dixie, and can bounce on his cane a la Scrooge McDuck in DuckTales. Also shown off during the VGX was the Kong Fu ability, which after obtaining 100 bananas allows you to transform enemies on screen into items. The new DKC will be released on February 21st.
Sonic Lost World recently got an update that made the game (a little) less frustrating, but today we see the first of the game’s DLC. A Yoshi’s Island-themed stage has been added to the game, allowing Sonic to speed through Shy Guys and Piranha Plants. Though the level looks like Yoshi’s Story, the gameplay is much like the SNES original. And like in Yoshi’s Island, there are five flowers to collect that will gain a better chance at a bonus at the end of the stage. There are also Yoshi eggs to collect as well. You can play the stage today for free and the next piece of DLC will also be based on another Nintendo series, but we have to wait until another Nintendo Direct to see what it is (unless you saw the hidden Triforce in the artwork Iwata popped on screen). 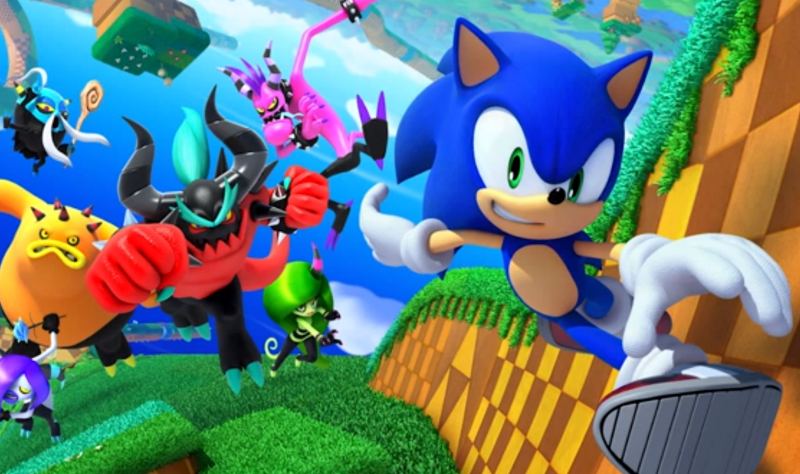 Today, Wii Sports Club gained a third returning sport: Golf. The Gamepad can be on the floor while you swing to see where your ball is and like the other sports allow better visuals and online play. A free 24-hour trail is available today for all sports again and will have rental and permanent ownership options available.
Next up is NES Remix, a brand new Wii U eShop game that takes many 8-bit classics and mess them all up to make a minigames collection out of them. The trailer has Link in the original Donkey Kong or Excitebike in the dark. The game’s available now for $14.99. We will have a review of it soon.

A new installment of Dr. Mario will be released soon on the Wii U eShop, but it wouldn’t be the Year of Luigi with Mario’s mug all over the place. So in Dr. Luigi, you get to play a classic style game, online play like Dr. Mario RX for WiiWare, and can play a new Dr. Luigi campaign. Luigi can throw two pills, shaped like an L naturally, which throws a wrench in the normal game’s strategy. The game also inherits Big Bran Academy’s Virus Buster (which in itself was taken from Dr. Mario) for Gamepad play. Dr. Luigi will release on the New Year’s Eve of the Year of Luigi. To celebrate, Nintendo will also offer a statue of Luigi on Club Nintendo soon.
What came up next was one of the most confusing trailers I have ever seen.

At first it looked like Kirby’s in Mario Kart 8 (or that another Kirby's Air Ride was in development), but then Rosalina crashes his hopes, and then with all the Mario characters around them (in their karts) it’s unveiled that Rosalina will be joining the Super Smash Bros Wii U/3DS roster.
The first new character since the original E3 unveil, Rosalina teams with a Luma to provide a 2-on-1 scenario that would make the Ice Climbers jealous. Rosalina can also manipulate items by having them gravitate them towards her, so don’t do it when Bob-ombs are lit. 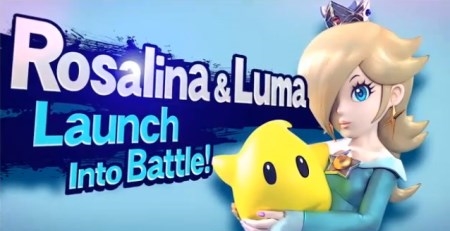 Lastly was a real trailer for Mario Kart 8. It shows off some of new levels like and airport while confirming returning characters like the babies and Rosalina. While the trailer was not particularly entertaining, it does remind players that Mario Kart 8 is one of the prettiest games on the system.
So, anything stuck out in particular that you want to mention? Say it in the comments! Like always, the entire Direct is below: