Destiny – The Dark Below: More of the Same Is a Good & Bad Thing

"The first major expansion for Destiny will please players craving more content but fails to fix old complaints"
By: Matt Rowles | PS3 Features - PS4 Features - Xbox 360 Features - Xbox One Features | December 18, 2014
The first major expansion for the divisive but still very popular Destiny launched last week. The Dark Below costs $20 or $35 for the expansion pass which will also include House of Wolves, scheduled for early next year. The expansion adds three new missions, two new strikes (one PlayStation exclusive), 1 raid and a whole host of new weapons and armor to unlock. But after numerous updates over recent weeks, is this expansion worth picking up? Clearly it will depend on your view of the game before as Bungie aren’t trying to win over naysayers anytime soon and are clearly doubling down on it’s new but already established fanbase.
First let’s talk about the new content. And how fantastic it is to actually have NEW content. One of the major criticisms of Destiny was it perceived lack of content and this will no doubt help to stem those concerns for some. If they are willing to drop more money that is. After playing all the content since launch numerous times and knowing every single mission, strike and even the raid like the back of my hand it was really nice to actually have a challenge again. Going into a new strike, not knowing what was around each corner, was awesome and really made me start to play more tactically as the game had become so easy; I would grind bounties on autopilot. While some would have wanted more than just three missions that can be completely very quickly, I still very much enjoyed what I was given.

Next up is the new strikes which again are such a breath of fresh air. Doing the nightfall and weekly heroic strikes pretty much every week on two characters since launch, I dread to think how many times I’ve beat the original strikes. While I would enjoy anything new at this point, these new ones are very well put together. Learning new strategies (cheese spots) feels very cool and something I haven't done for so long in the game it really reminds you why a lot of people have really taken to this game and it’s future over the next decade.
The main criticism thrown at Destiny seemed to be it’s story, or lack thereof. Bungie had a small chance to redeem themselves here and they really haven’t changed what they are trying to do. Yet again the story can be found if you really search for it but even if you did, it’s just not that good. I personally don’t play this game for the story but for it’s shooting mechanics that I believe is the best in the industry but I fully understand why people would want a great story in a Bungie game and that still continues to be completely absent.

However the main reason for picking up The Dark Below for most fans still playing the game is of course the new raid, Crota’s End. Having beat the Vault of Glass multiple times and being a level 30 experienced player going into the DLC, I expected things to be a lot smoother this time around. Surely my Vex Mythoclast would tear through everything with ease and I would be well on my way to the new level cap of 32 in no time. This was not the case.
After you make the drop into the raid and feel like you are falling forever only to be greeted by the harsh floor below; it’s clear Bungie is about to throw some serious stuff your way. At first it seems like maybe you are all alone in the darkness but that soon becomes a distant wish as thousands of Thralls begin rushing towards you and your team. It’s the stuff of nightmares and one of the coolest sequences Bungie have ever made.

Once you start to get the hang of things once again it doesn’t feel as impossible as it once did and it’s a shame so many exploits are easily found (you can solo the entire raid up to the final boss if you wanted pretty easily) as it can take the fun out of things slightly. This raid benefits from having a more interesting enemy to fight as I personally enjoy fighting the Hive more than the Vex and also prefer the Moon as a setting.
So many updates over recent weeks have slowly changed the way you play the game and I really think a vast majority of these have made it a better experience. Being able to upgrade your old exotics to the new higher attack stats is fantastic as it stops your favorite weapons from becoming useless, though a difference between trading in a fully upgraded weapon to one that has seen no upgrades would be nice. 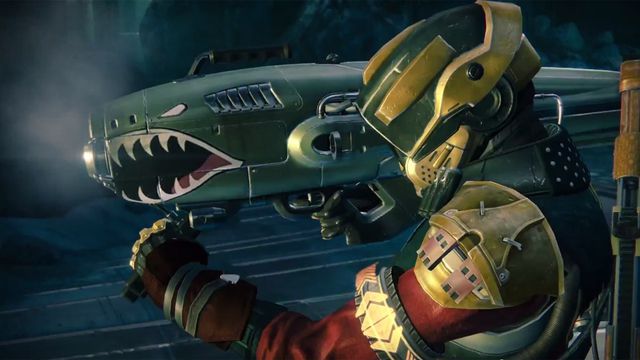 The Dark Below will absolutely not win over any new fans for Destiny. It’s clear that Bungie are already doubling down on their vision and focusing on the community that already exists rather than trying to fix what some players saw as faults in the first place. The price may seem steep to some but given how much certain map packs cost for other games I really don’t think it’s unreasonable. And after playing the main game for over 250 hours, I’m pretty sure I’ve got my money’s worth at this point. Destiny’s first major expansion has given me enough to keep me playing until the next one drops and by then I hope Bungie will have something big to show off like a new planet to fight on.