Detective Comics #20 Review: So the Tumbler is Canon Now

WARNING: Slight spoilers for previous issues of Detective Comics involving Ignatius Ogilvy and some spoilers (though they should be obvious) for this issue

The New 52 hasn't added much to my enjoyment of DC Comics (if anything it's made me happier to read Marvel) but Ogilvy, along with the Court of Owls and Harper Row, was one of the few New 52 additions I actually saw a lot of promise in. This issue was the issue that proved me right to see such promise in Ogilvy.

Ignatius Ogilvy, the usurper of Penguin's throne, takes on Batman. I wouldn't normally spoil the fact that he now has superpowers but the cover does that for me. So, with these newly-spoiled powers Ogilvy is ready to send Batman to his grave. Can Batman win or will he have to rely on some... outside help? 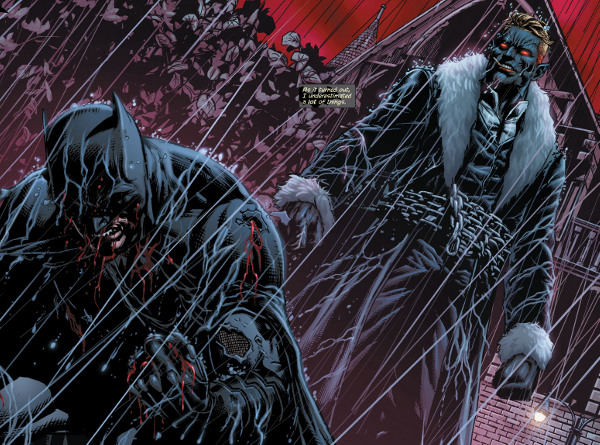 The confrontation between Batman and Ogilvy has been building up for several issues now ever since Ogilvy took over Penguin's place in the crime world and helped send Penguin to the slammer. That alone got me interested in Ogilvy's character, but this issue is accessible to new readers. For some reason it even has a "Prologue" and "Afterword" despite being part of a larger arc but it works for newer readers while baffling the recurring ones like me as to why this is being done. Though calling the parts "Prologue" and "Afterword" was unnecessary.

This issue increases Ogilvy's already established badassery even though it really shouldn't. The fight between him and Batman feels really short, but my respect for his character continues into the "Afterword." His origin story is a bit of a disappointment however. It's the exact same thing as another character and that was probably purposeful but it still felt like an excuse for the writers not to think of something new. Still, Ogilvy's character is ten times better than his origin. 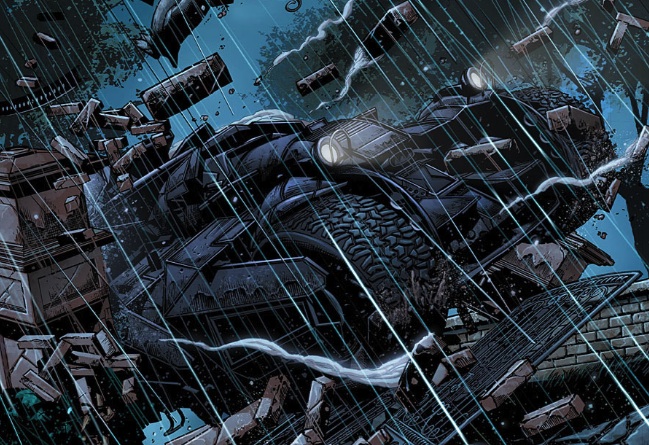 But Ogilvy isn't the only one who shines in this issue. Penguin's role in this comic reminds me why this character is in Batman's Rouges gallery. His reach while still in jail with everyone seemingly against him and his role later on in the comic show how capable Penguin is as a villain despite not being insane or having a creepy back-story like the rest of Batman's villains.

Other than the quick pacing, my one other problem with this issue is what John Layman decided to make canon in the mainstream comic book universe: the tumbler. Yes, Christopher Nolan's realistic take on what the batmobile would look like (which apparently is a gaudy tank) that was featured in his Dark Knight movie trilogy. I hated this batmobile and by far prefer the sleek look of the comic book batmobile. There was also no reason to add the tumblr here other than to put it in a cool two page spread. 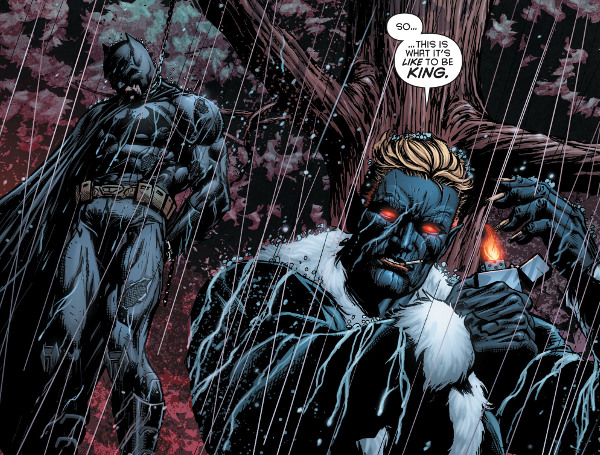 Jason Fabok has some really great artwork here. There is some disturbing imagery with Batman hanging from a chain on a tree. This atmosphere is furthered by colorist Jeremy Cox's choice of a red and black background. There are also a lot of heavy shadows in characters which usually ruins artwork for me, but during the fight between Batman and Ogilvy it works to keep the mood dark. But sometimes Fabok on his – admittedly - pretty one- to two- page spreads, makes it look like Batman is on the "Rob Liefeld diet" with his torso being so large he wouldn't be able to walk without being a hunchback. Ogilvy's look is also very basic with a skin change and, by the end, a haircut. So this is what someone looks like when they mix a Man-Bat and Venom serum together. It is intimidating despite being basic but it still feels like they could have done more.

The fight with Ogilvy could've lasted longer and you would think it only lasting one issue would make Ogilvy seem weak (it's kind of obvious who won). But even with a bland origin story, Ogilvy's character makes him seem like a strong character who I hope to see again soon. If you're interested in Ogilvy at all or the Penguin this is a good issue to check out. Ogilvy may not become a very famous member of Batman's Rogues Gallery but he's gotten his wish: even though he's a footnote in the Batman's universe, he is no longer a nobody.