Over the past couple months, Monkeybrain Comics has been releasing a slew of new and original material by creative teams made up of lesser known writers and artists.  I gave Theremin #1 and Antihero #1 glowing reviews in anticipation of more issues.  However, it wasn’t the publisher that drew me to the soon to be released Detectobot #1, it was the premise as told by the prologue, issue #0.

On July 18th of this year, Detectobot #0 was released to build excitement for the August 28th release of the very first issue.  In this prologue, we learn that Professor Schwarzhoffer invents detectobot to solve a crime that has yet to happen: his murder.  Then, Detectobot is deactivated, set to reactivate when the paranoid Professor ceases to live.  Once his one and only objective is complete, Detectobot will deactive indefinitely. 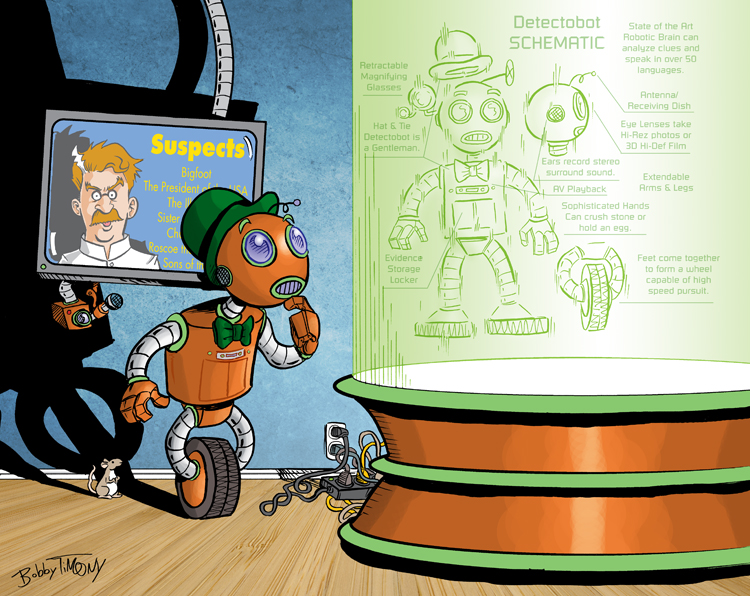 Detectobot #1 opens up with the reactivation of the comic’s namesake. It’s the beginning of a story that promises to be every bit as odd as it sounds, with plenty of lingering questions that have yet to be answered.  Issue #0 alone reveals how unqualified Detectobot is to be the hero of his own story, which has actually sparked my interest and curiosity rather than my boredom and ultimate rejection.

Detectobot is a robot with a singular objective: solve the whodunit murder of his inventor.  That is all it is programmed to do.  Luckily, detectobot seems to have an ally in all of this.  Abbie Dolan is the first to discover the body, and although she is detectobot’s primary suspect, it seems quite clear that they will be working together on this. 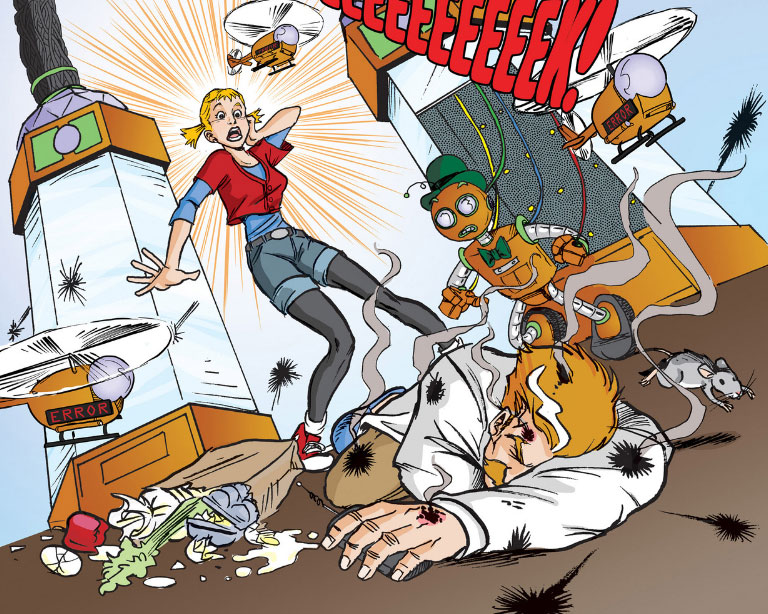 Despite dealing with murder, Detectobot #1 is light in tone and often times very funny.  The unique set up for the story fits well with Monkeybrain’s other releases.  They are once again challenging the boundaries of genre in ways that run counter to expectation.  As I said earlier, Detectobot is the unlikeliest of heroes, and it will be interesting to see how the creative team handles the challenge.

The creative team itself is made up of only two people, and they happen to be twin brothers.  Bobby and Peter Timony are best known for their work on “The Night Owls,” and Detectobot is another creation from the prodigal pair.

Peter Timony, writer, has a keen sense of humor and it shows in the dialogue and various circumstances the characters find themselves in.  Detectobot, the robot, is a humorous creation; there is a clear self-awareness woven throughout, with a hero whose desire is programmed and therefore artifical, and who wears a green bowler hat with a matching bowtie.  There is an essential absurdity here that turns the detective thriller on its head—in a good way. 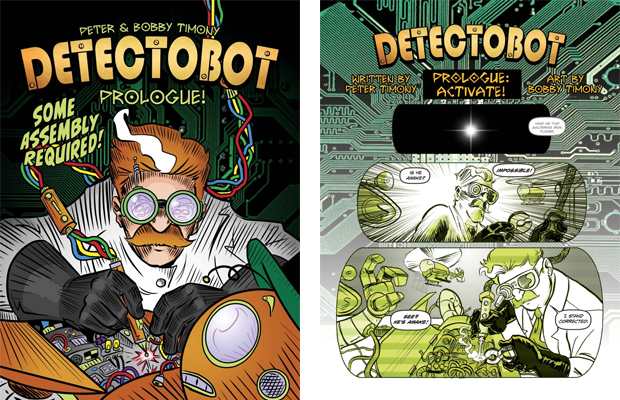 And speaking of green bowler hats with matching bowties, Bobby Timony’s artwork solidifies the not-so-serious tone.  There is a cartoonish quality about the illustration—over-emphasized facial expressions, bright colors, freckles and pigtails.  It complements the writing excellently, as you could expect from a creative team made up of twin brothers.

Detectobot #1, in a word, is strange.  At this stage, strange is a good thing, although I will certainly be on the lookout for more substance in issues to come.  I certainly recommend picking up a copy on August 28th.  Monkeybrain Comics is worth supporting and Detectobot is too crazy to miss!