UPDATE: Square-Enix has officially announced Deus Ex: Human Revolution Director’s Cut and Eurogamer has the info about this rerelease, which seems to more than just a quick port of Adam Jensen’s 2011 adventure.

According to the Eurogamer article, the Wii U version on Deus Ex is described as the “ultimate edition” of the game, equipped with many gameplay tweaks, visual enhancements and both the DLC - the Missing Link and Tong’s Rescue (A GameStop preorder bonus in the other versions).

First and foremost to the game’s adjustments is the number one issue with the original game: the bosses have been altered for players who play Deus Ex in a less run-and-gun style. Now players who focus on hacking or stealth can defeat these bosses in a way that is tailored to them.

Another complaint that was addressed was the game’s energy system. While players could upgrade the amount of energy they can use, only one segment of energy would auto-refill. This made using augmentations, upgrades that made the game’s combat and gameplay much more dynamic and colorful, less useful; which made the original game feel a bit more bland more the majority of the time. The Wii U version will allow two segments on energy refill so that players can fiddle with the augmentations more often. 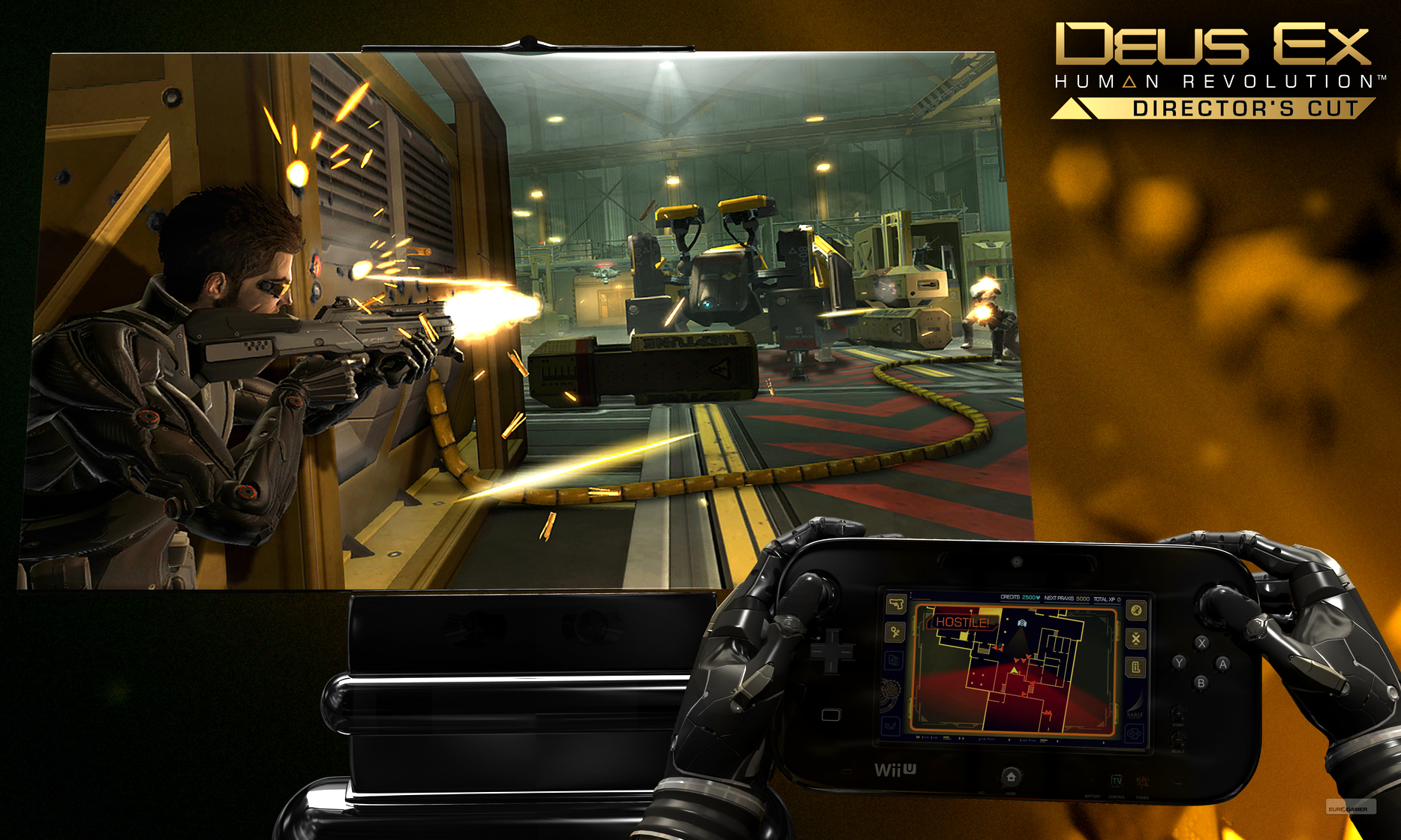 The Wii U version will also receive a bulk of graphical upgrades over the other versions. Eidos Montreal stated that shadows would be crisper, anti-aliasing would be enabled and a new fog system will be in place to enhance the environment.

Deus Ex: Human Revolution Director's Cut will allow some unique Gamepad usage, including the Neural Hub, which will allow Jensen to see enemy health, armor and loot. The touch screen will also allow players to access menus (inventory, missions, augment upgrading) and the radar in a more intuitive way to reflect the idea that these systems are within the augmented Adam Jensen himself. 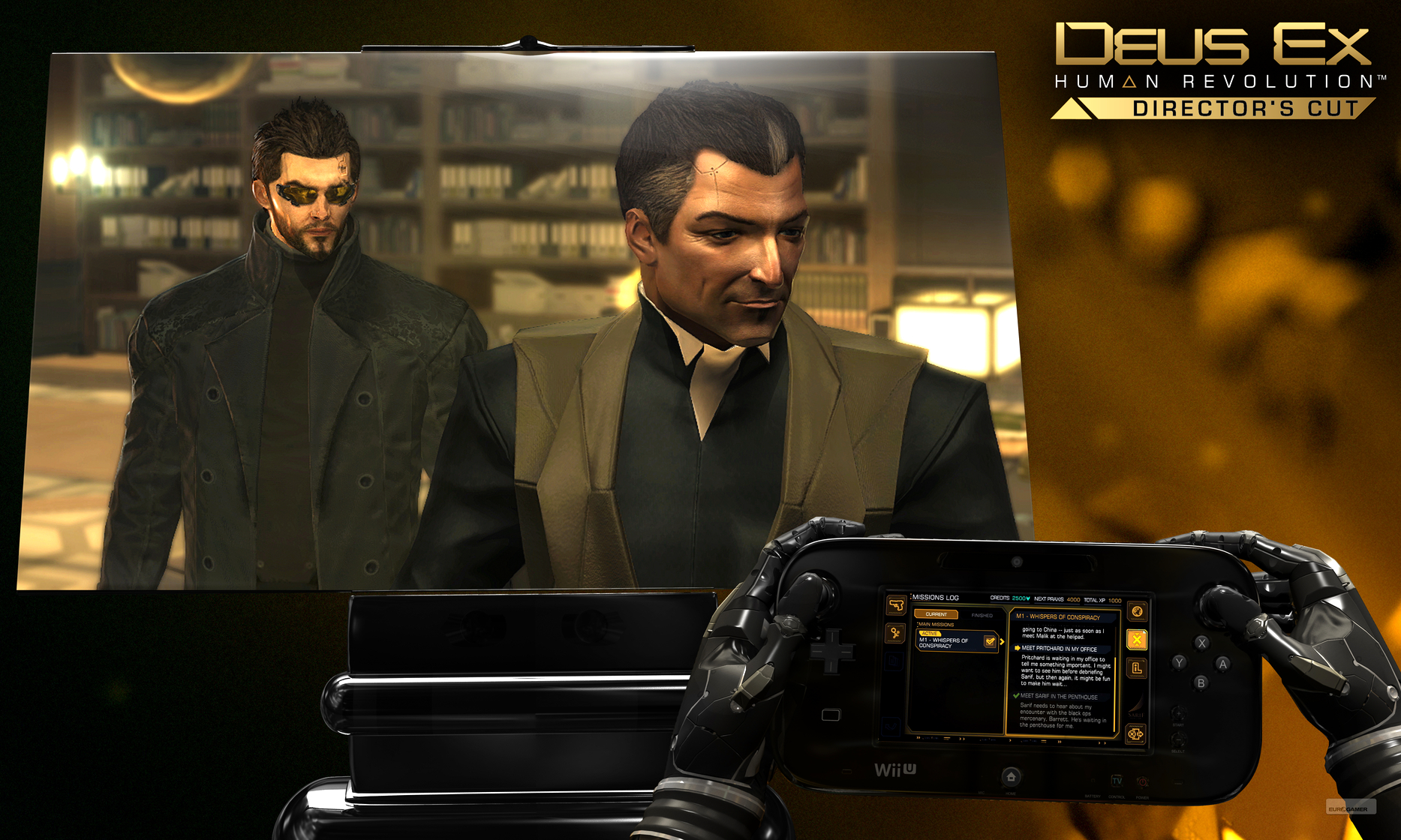 New to the director’s cut is developer commentary, which will be sprinkled throughout the campaign. When Jensen activates a commentary icon, the voiceover starts and will stay on while you play. Eidos Montreal stated that there is about eight hours of developer chat within the disk.

Square-Enix did not provide a date, but the Amazon listing from earlier this week mentioned a May 7 release. The Wii U version is being co-developed by both Eidos Montreal and Straight Right, the folks who developed Mass Effect 3: Special Edition for the Wii U.


ORIGINAL ARTICLE: It looks like the assumption of Deus Ex: Human Revolution hitting the Wii U was right on the money.

A few days shy from its unveil at PAX East 2013, an Amazon listing has shown up for Deus Ex: Human Revolution Director’s Cut. According to the listing (which has been pulled offline) that the Wii U version will be equipped with “improvements, features and additional content," with a mention of a new Neural Hub augmentation which will use the Gamepad in some way.


It is currently unknown if The Missing Link DLC will be included in the Wii U release. Also unknown is the reasoning behind the Nintendo Network logo on the box, unless Square-Enix plans on releasing future DLC, such as The Missing Link, on the Nintendo eShop. In comparison, the Xbox 360 version only lists DLC for its Xbox Live features and has only received The Missing Link and Avatar items.

The listing shows a release of May 7th without a price, so let’s hope Square-Enix learns from games like Mass Effect 3 Special Edition that $60 ports of games that are currently less than twenty bucks on other platforms is not the best business model.

Square-Enix will most likely make their public announcement of Deus Ex: Human Revolution Director’s Cut this Friday at PAX East in Boston. We will be there to see how augmented the Wii U version has become.