My Adam Jensen is cooler than your Adam Jensen.  My Adam is silent, fast and invisible.  He can run past you without you knowing he was there at all.  If he feels like killing you, his pistol is so silent that you’ll never hear it even as your friends start dropping all around you.  If you’re wearing a lot of armor, that’s not a problem for his revolver.  It isn’t silenced, but it’ll be the last thing you ever hear.

Adam is the main character in Deus Ex Human Revolution; he’s a cyborg, and players can choose which cybernetic augmentations he gets as the game progresses.  Bullet-proof skin, X-Ray vision, Super Strength, Hacking, Radar… Jensen can have dozens of powers, and the player gets to choose how all of this develops, along with many other choices throughout the game. Adam Jensen is whatever you want him to be. 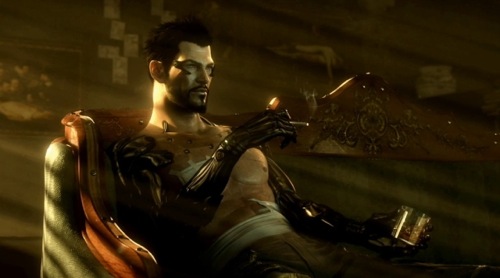 Human Revolution is a prequel to the first game, so at this point in the story, cybernetic augmentation is a controversial topic, with bigotry against “Augs”, and rampant class warfare between cybernetic haves and have-nots.  It’s a rich cyberpunk world, fully fleshed out and highly reminiscent of the works of Neal Stephenson and William Gibson.

Jensen is the head of security at a massive company that makes military augmentations, and he ends up getting nearly killed in a terrorist attack.  Six months later he returns to work, now more machine than man thanks to life-saving augmentations provided by his employer.  If all of this sounds a little too convenient… well, you’ll just have to play it and see just how deep this rabbit hole of conspiracy goes. 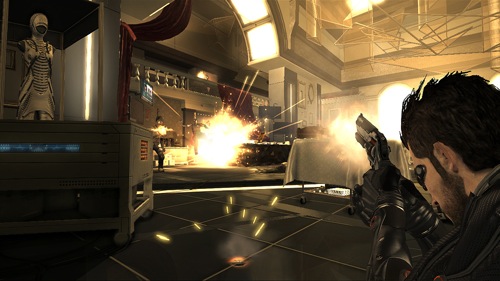 I won’t go into the various twists of the plot, but the story is engrossing, and most players will end up wanting to explore this world thoroughly to uncover it all.  It definitely warrants multiple playthroughs, especially considering that Adam is given many story choices during his adventure.  One player’s interpretation of Jensen might be a brutal killing machine who shoots his way through missions, looting as he goes.  Another player might make their Jensen a compassionate do-gooder pacifist who never kills, and always tries to talk his way through a situation.  Both styles, and many more are supported by the gameplay, and the story.

The Skill system used in the first Deus Ex game has been removed, but Adam still gets Experience Points for exploration and completing quests.  These XP will unlock free cybernetic upgrades.  Different sorts of activities will yield XP exploration; killing different enemy types, using stealth, hacking.  Pretty much anything you do in the game.  You will be rewarded for immersing yourself in this world!

While Human Revolution has many, many things going for it, there are a few problems.  There are several very frustrating boss battles.  These put the player in a situation where lethal combat is the only choice, and are heavily biased in favor of players who choose combat mods over things like hacking or stealth.  They feel out of place in the Deus Ex world, and don’t provide the option to resolve the encounters through dialog, hacking or exploration.

The control set up on the Xbox is adequate, but I had a few problems, particularly with the melee combat button.  Adam uses built-in retractable arm blades for hand-to-hand combat, and any time he’s standing close to an enemy, the Player can hit the B button to launch a scripted one-hit kill.  The problem is that the melee button is also the “Cancel” button for many menus, and several times during the game I accidentally beat the crap out of some random bystander while trying to cancel an action.  Usually this produced a snicker, but it got me killed a couple of times too. 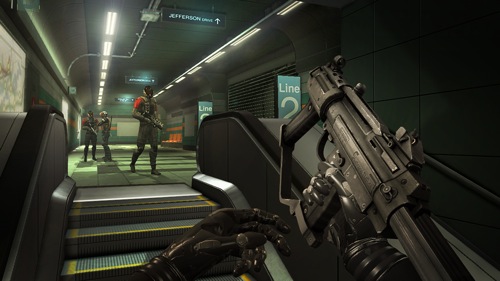 Another problem specific to the Xbox version is that the load times are too long.  As of this writing, a patch has already been released for the PC version to cut load times, but nothing similar is available for the Xbox edition right now.  The load times can be quite an annoyance since any time Adam dies the level has to reload, and Adam can die a lot during the boss fights.

Yet these complaints won’t hold Human Revolution back from winning some Game Of The Year awards a few months from now.  Despite a few flaws, this is certainly among the best titles of 2011 so far, and is something that belongs on every gamer's shelf. Whether you’re a fan of the series or a newcomer, Human Revolution offers an engrossing experience that can be tailored to any player's desire.