Last week’s final scene certainly provided an ample amount of anticipation for this latest episode. Hannah’s surprise comeback was certainly unexpected and introduced a fresh element to the narrative of the season. This development, along with other turns in the storyline, brought up intriguing questions for the series’ future. What does Hannah plan to do with Debra and Dexter? Will Dexter be able to successfully teach Zach “the code”? Why is Cassie still hanging around? “Dress Code” has no shortage of engaging plotlines and offers definitive answers to many of the questions brought up during previous episodes. 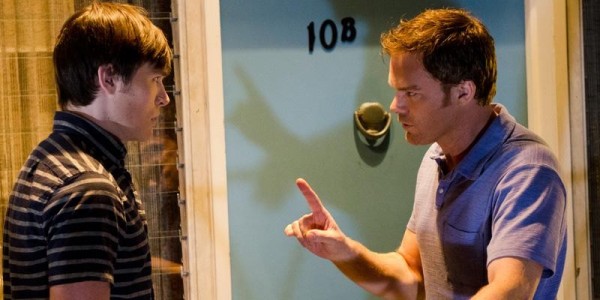 Zach quickly becomes Robin to Dexter’s Batman, but faster than you could say “To the breastaurant!” the budding relationship almost immediately turns sour. Sam Underwood does an absolutely wonderful job playing Zach Hamilton, conveying a slightly endearing nervous energy as he eagerly turns to Dexter for guidance. He also does a good job portraying Zach’s frustration and anger, as things with Dexter don’t go the way he wants. Underwood definitely holds his own against Michael C. Hall, no easy feat considering how effortless it is for Hall to ease into the Dexter persona and how iconic the character has become after so many years. Dexter is inherently the dominant figure in their relationship, so Zach doesn’t have to impose himself too strongly (yet). Now, with Zach going off the rails, his interactions with Dexter (if any) could become more volatile; we’ll see how well can carry that. The Zach storyline is one of the most interesting aspects of the episode; the fact that Dexter has somehow made himself responsible for this other person, and totally fails in his duties, is intriguing in terms of what it will do for his character development. It is essentially his fault that Cassie is dead and we can look forward to how he will deal with it in the episodes to come. Dexter isn’t the only character that is going to be affected by Zach’s actions; the potential implications for Dr. Vogel and even Quinn will hopefully provide compelling material. Zach’s story arc has been uneven at times, but as it progresses it becomes more and more absorbing. Given the way it has been built up, it would be disappointing to see him in Dexter’s table in the next episode. To get rid of him so quickly would be completely anti-climactic, so I hope the writers have bigger plans for little-Dex. Who will he set his sights on next? He already hit Dexter pretty close to home with Cassie. 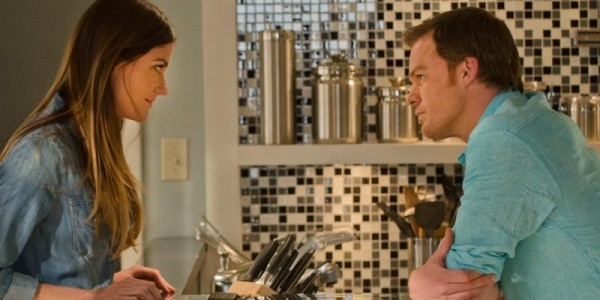 Oftentimes, when a character is introduced on Dexter, it means he or she will eventually meet an untimely, perhaps gruesome death, (watch out Masuka’s kid), so Cassie’s death isn’t necessarily shocking. The way it comes about, though, is quite surprising, I think. As she's introduced as a potential love interest for Dexter, and even talks about him with Debra, in this episode, the most obvious person to feel threatened by her would be Hannah. Seeing as Hannah has the tendency to get a little bit batshit crazy (as we saw in the previous season when she went after Debra) it would make sense for her to potentially cause harm to Cassie, who would have posed as a threat to her relationship with Dexter (whom she obviously still loves). The writers' decision to have it be Zach who lashes out against Cassie is a nice departure from the more predictable route. It seems that Hannah much bigger issues to tackle than some neighbor who’s crushing on Dexter, and it appears that she is here to stay. Whether her story is completely true or she is manipulating Dexter is something that we’ll have to wait to find out, but the situation does present appealing factors. What is more interesting is how Hannah’s semi-permanent presence in Dexter’s life is going to affect Debra. 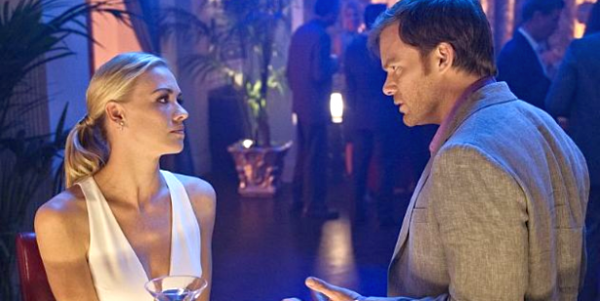 She is convinced that Hannah is a major factor in the mess that was her life just weeks ago, and is not happy that Hannah is making her way back. Debra and Dexter’s relationship has been doing so well these past couple of episodes, and it will be a shame when it all goes to hell. Their relationship is definitely the heart of the series, and with half a season left to go there is no saying what the Morgan siblings’ relationship status will be in the coming weeks. The writers are doing an excellent job with incorporating new conflicts and obstacles into the narrative without these choices feeling repetitive and monotonous. As the characters progress (and we've seen significant character development for both Dexter and Debra this season) and overcome certain issues, another set of distinctive concerns emerges, therefore marking the season with an enjoyable and quick pace. Sure, there have been minor snags in the storytelling, like Debra’s positive turn coming on too suddenly and conveniently, but overall the story has evolved in unexpected and exciting ways and has rarely been dull. Since we are now moving into the second half of the final season, there is a noticeable shift in the narrative. Much of the episode focuses on Dexter and his current issues, it's certainly a much more Dexter-heavy hour than some previous installments. There is a lot of Dexter/Hannah and Dexter/Zach material and a bit of Debra; the writers have even pared down the appearance of the distracting secondary characters (they mainly focus on Masuka in this episode). As the program nears its end, I only expect the story to intensify and focus in on Dexter and his experiences.

-- I am very fortunate for not having been bombarded with boring Quinn/Jamie/Batista drama this week. Only the brief stuff about Quinn and Jamie moving in together, which doesn’t interest me at all. After being so frustrated by the irritating B-storylines this season, I'm surprised to find myself actually enjoying the couple of Masuka scenes in this episode, for whatever reason. I don't hate watching Masuka assert himself as a parental figure in the ridiculous storyline, maybe because the episode is quite intense/serious, so the comic relief provided is both welcomed and enjoyed. “I’m not gonna be a stripper, Dad!” Words every parent longs to hear.

-- I grow worried as Hannah begins to get manhandled by her new hubby; she had been portrayed as a formidable, tough, scrappy woman, so her weak defensive moves were beginning to feel a little insulting. There is no way that Hannah would act so passively and let Miles take advantage of her. She is not necessarily the most likeable/sympathetic character, but at that moment it's easy to root for her to gain the upper hand.