Lock up your daughters and put the kids to bed, because Dexter is back on TV and if previous seasons are anything to go by, there will be plenty of body parts flying about. Last season ended with the death of Dexter’s wife, Rita and was perhaps the most poignant moment experienced by television audiences that year. My Bad portrays the aftermath of Rita’s murder and Dexter’s struggle to come to terms with his feelings or more specifically, whether he has any at all.

The show’s success lies in the complexity of its central character. The contrast between the mild mannered and charming persona he projects to his family and co-workers, and his murderous compulsions makes it possible for Dexter to play both the protagonist and antagonist to his own story.  It seems unlikely that a sociopathic serial killer could be both likable and humorous, but superb writing and excellent production has constructed exactly that.

The season premiere exploits these ideas as Dexter navigates the mourning process in his own characteristically emotionless way. This also provides some awkwardly comedic moments as friends and family try to console a person that appears to be only slightly inconvenienced by the brutal murder of his wife.  In truth, not much happens in the hour long episode; however, it is captivating from start to finish thanks to a flawless performance by Michael C Hall.

Dexter’s friends and family’s reaction to his lack of emotion, range from the concerned to the suspicious. His 911 call plays like a medical testimony and his co-workers begin to question his behaviour both before and after Rita’s death. There are also some excellent flashback moments that show when the couple first met. It turns out that Dexter was merely using their first date as a cover whilst he stalks a target, even disappearing briefly to subdue him and stuff the guy in his trunk. I had always wondered how the unlikely couple had come together and this was a sufficiently dark and quirky explanation as to the origins of their relationship. 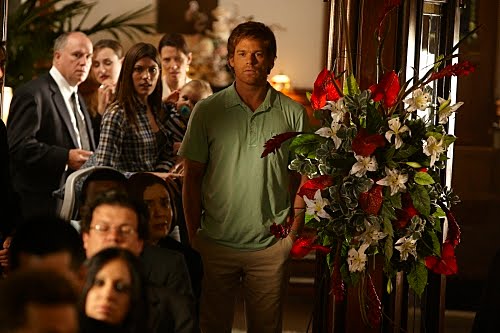 But as we all know, Dexter may not empathise well with others, but he is not entirely void of emotion. After making a decision to leave this life behind and disappear himself he bumps into a rather unsavoury character at a rest stop and is overcome with rage. In a torrent of hysteria he beats the man to death with a small boat anchor and breaks down screaming on the bathroom floor. It’s this hint of humanity (albeit in a rather inhumane way) that allows the audience to connect with Dexter and his struggle to deal with the preceding events.

Even though there was little movement in the plot, the season premiere epitomised everything that makes the show great. Dexter’s emerging humanity and his friends and co-workers confusion over his nonchalance have laid a nice foundation for a season that is unlikely to be anything but superb. Rita maybe dead but Dexter has never felt so fresh and alive.