This season is just as much Debra’s story as it is Dexter’s. It could even be said that it has been much more focused on Debra’s experience and how she has been affecting Dexter. As opposed to previous seasons in which Dexter’s actions dictate where the narrative goes, these latest episodes have him reacting to whatever situation Debra finds herself in and bending to meet her needs. No longer is Dexter the unflappable and stoic serial killer of the early seasons, in which he managed to jump over any hurdle and obstacle that came his way and was emotionally separated from pretty much everybody in his immediate circle. Dexter is probably more invested in repairing his relationship with Debra than anything else going on in his life at this point, even raising his son (who has a new imaginary friend that Dexter was completely unaware of). It makes sense that he would be so invested in his sister; she is the only person left that he actually cares about and loves, despite what Dr. Vogel might think. But as Dexter struggles to maintain his relationship with Deb, he fids her fighting against his desire to reunite, as demonstrated by the last shocking moments of the episode. This shift in dynamic has introduced an engaging and tense quality to the last few episodes that feels certainly necessary for the last season of the series. 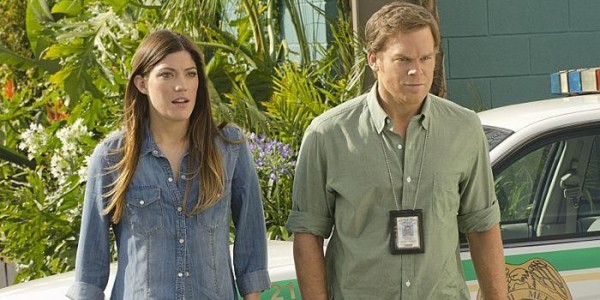 Whether or not Debra will actually kill Dexter by the end of the show’s run is a theory that has been floating around since she found out his secret identity. It seems fitting that that would be the way it ends for Dexter, but this latest episode seems to suggest that Debra is incapable of going through with it. The entire hour leads up to Debra’s realization of what she thinks she should do, which leads her to carry out the impulsive move in the last scene. Yes, it's a shocking moment; it completely takes the viewer by surprise to see Deb derail the car like that (especially with Jennifer Carpenter’s almost dreamy and tranquil demeanor in the scene), but since it's done so early in the season, the actual threat of danger to either of the characters is completely null and void. Though the purpose of the scene isn't to put the characters in real danger, necessarily, but to show the implication of Debra’s actions, both her decision to attempt to kill Dexter as well as her inability to go through with it. What this means for the siblings’ future is open to interpretation, but will introduce engaging tension and complications for the season to come. We often like to think of Dexter as a “noble” killer, since he gets rid of the people who need to be eliminated and is honing his psychopathic tendencies for good, but he has left a trail of innocent bodies in his wake. Doakes, Rita, Harry, and LaGuerta, all of whom met their end because of him, were “innocent” people who died/were killed because of their relation to Dexter. The dilemma of whether or not these lives are worth the many criminals Dexter has also killed sums up Debra's struggle. Will she become another name in the growing list or is it up to her to put this to an end? 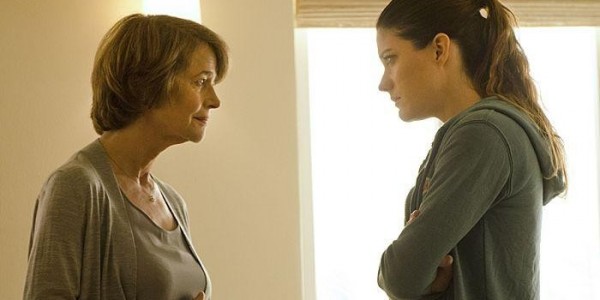 It's good to finally see a coherent and sober Debra after three episodes of her being a complete hot mess. She is certainly still troubled and conflicted, but she is at least in the right headspace to do something about it (even if it is an attempted murder/suicide). Drunk Deb was beginning to wear on the show and becoming quite repetitive; though she is still struggling with the same issues, seeing her address them with varying approaches is a welcome change. Once again, Charlotte Rampling delivers a superb performance as the seemingly duplicitous Dr. Vogel. She is still a character shrouded in mystery and doubt and although a significant secret was uncovered (her patient files on Dexter), there still seems to be more to the character. I certainly hope the writers have more for the character because she is played so wonderfully and her exchanges with both the Morgan siblings have been absolutely delightful to watch. Their material is definitely more interesting to watch than anything else concerning the other secondary characters of the show who inexplicably continue to be given their own subplots. This week’s winner of the utterly useless storyline of the night goes to Masuka! Apparently he donated some sperm while in college, and now we are supposed to care that he might have fathered a young girl, blah. Why is this important? We already have Quinn’s irritating storyline taking time away from Debra and Dexter, and this new development is even more removed from the central narrative, I don’t see how the writers intend to incorporate this new conflict into the overall story of the show. While Quinn and his relationship drama are annoying, the prospect of him becoming Sergeant and the status of his relationship with Deb could pay off later in the season; however, there is no foreseeable payoff that could be had with Masuka’s long lost daughter.

Despite the small glitches in the secondary storylines (which, at the rate they are going, is going to be a constant for the show), the episode is compelling and moves the story along considerably. Dexter comes closer to getting rid of the brain-scooper, there is serious progression in his and Deb’s relationship, and his situation with Dr. Vogel is considerably altered. The final moments of the episode introduce the potential for some fascinating drama in the series final season. Can’t wait for next week. 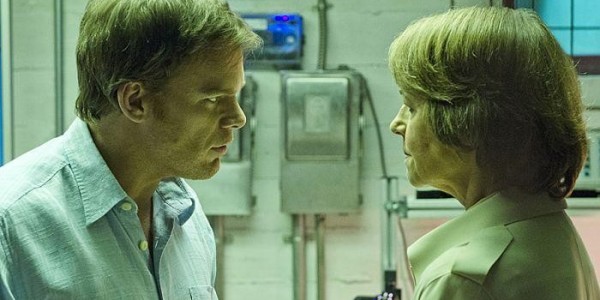 -- Even though the show is in its eighth season, that fact that it can still generate palpable tension in scenes is pretty impressive. The scene in which Dexter creeps around in Yates’ home is considerably tense, especially as Yates makes his way down the hallway. We know that Dexter will get out of any situation and there is no real trouble or danger imminent, but is was sufficient anxiety created because the audience is aware of something Dexter isn’t. His lack of awareness about the potential danger totally makes the scene.

-- What’s up with the completely unsexy and unnecessary Quinn/Jamie sex scene? Ugh, it's really unfortunate what has become of Jamie; their relationship still rings completely false and contrived and I just don’t care.